Mass for Life affirms value of all 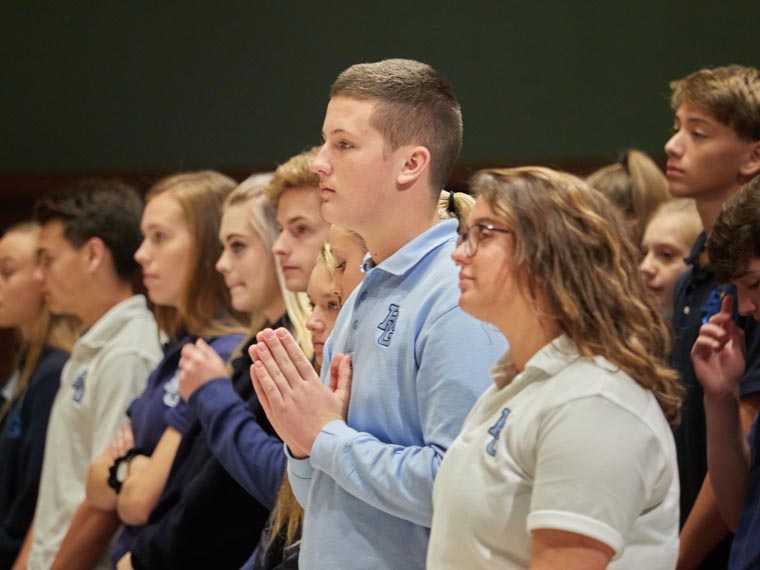 Students from Catholic high schools across the diocese joined Bishop Robert J. Cunningham at the Cathedral of the Immaculate Conception Oct. 26 to celebrate the annual Mass for Life.

The liturgy is celebrated each October, during national Respect Life Month. “We really want to affirm, again, the value of life, and doing it in the midst of Mass is who we are,” said Lisa Hall, diocesan director of the Office of Family/Respect Life Ministry. “We want to connect Jesus, the Eucharist, Mass, the love of life, and the love of Christ.”

“Many of us here cannot imagine the fear that a mother considering an abortion might be going through,” he said. “Can we say to them in confidence what Jesus tells us ourselves: ‘Be not afraid’?

“Only if we live as Christians and Catholics who are willing as a Church to give of ourselves, even to sacrifice, in order to take care of those in this situation,” he continued. “First help them turn from abortion, but then be able to say, ‘We will be with you to help you with this.’ The same is true for the elderly, the disabled, the homeless.”

The Mass was followed by a presentation from abortion survivor and pro-life speaker Josiah Presley. Born in South Korea, Presley was adopted by an American family at 13 months old. At 13 years old, Presley learned from his adoptive parents that his biological mother had undergone an abortion procedure two months into her pregnancy. Presley survived the procedure and was born healthy; his left arm is deformed, perhaps because of the abortion procedure, he noted. Growing up, Presley struggled with depression and self-image issues, he said.

A Baptist, Presley said he was saved at a summer camp when he was 16 years old. In those moments, he said, things changed.

Now in college, Presley has travels widely to share his story and his message of the value of all life.

Winners of the first Pro Vita Awards were also announced at the Mass. Established in honor of the late Bishop James M. Moynihan, a staunch pro-life advocate, the Pro Vita Awards grant scholarships for college tuition to high school seniors. Applicants were asked to answer the questions, “Why are you pro-life?” and “How will you help build a culture of life?” Three winners were announced: William Thomas of Notre Dame Jr./Sr. High School in Utica was awarded $1,000 for his video submission; Ben Dwyer of Baker High School in Baldwinsville was awarded $1,000 for his essay and photo submission; and Angela Klawiter of Seton Catholic Central in Binghamton was awarded $500 for her essay. The awards were sponsored by the Office of Family/Respect Life Ministry and the Catholic Schools Office.

See more photos at facebook.com/syrcatholicsun and video from Syracuse Catholic Television at youtube.com/syrdio.