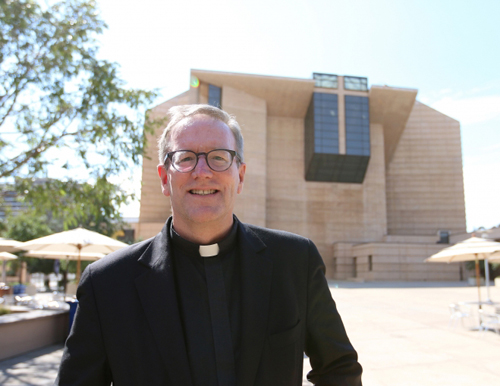 WASHINGTON (CNS) — In an era where Catholics are pretty much an afterthought on television, the sight of any cleric on the small screen almost immediately evokes thoughts of “the next Bishop Sheen” — the 1950s prime-time inspirational program host Archbishop Fulton Sheen.
But in pretty much all past cases, those clerics weren’t bishops themselves. But now Father Robert E. Barron, a media savvy priest, has been named an auxiliary bishop for the Archdiocese of Los Angeles and will be moving to the heart of the television industry.

Bishop-designate Barron, appointed July 21, may be best known to TV viewers for having hosted “Catholicism,” a 10-part DVD series. Four parts of the series aired on 90 PBS affiliates in fall 2011. The series earned him a Christopher Award and the Clarion Award the following year from the Catholic Academy of Communications Arts Professionals.

It was discovered by Catholic News Service earlier this year that “Catholicism” is available on the black market in Cuba, purchased for download onto a thumb drive so that Cuban Catholics can watch it — not because the series is illegal but because it’s not readily available in a store.

In a 2013 interview, Bishop-designate Barron said his dream was to assemble another sweeping documentary on Catholicism. With Hollywood in his new backyard, that dream could become reality. He once estimated it would cost $4 million to produce the documentary, tentatively titled “Pivotal Players.” The new series is still in the pipeline.

He also appeared on EWTN in 2007 on “Untold Blessings: Three Paths to Holiness,” providing concrete, practical advice on how to become a saint.

Bishop-designate Barron’s reason for using video? “If you want to reach people who are under 40, you have to use media. Things like YouTube had just come into being and we jumped into that with two feet,” he said in 2013. “If you want to find the unchurched Catholics and the secularists, you aren’t going to find them by staying in church and inviting them to programs. You have to use this new means. We have to invade that space.”

The 55-year-old bishop-designate has taught systematic theology, but outside seminary education, his stock in trade has been evangelization. The Chicago-born cleric is the founder of Word on Fire Catholic Ministries and he has traveled across the United States to speak at conferences, conventions and symposiums on spreading the Christian message. In 2010 he launched a Sunday morning TV show, “Word on Fire,” on the WGN America cable channel.

“It is a blessing for me to work with you to introduce people to Jesus Christ and invite them to share all the gifts he wants his people to enjoy,” Bishop-designate Barron said in a July 21 statement released by Word on Fire.

He is slated to be a speaker at the World Meeting of Families in Philadelphia in September, although it was not immediately clear whether his new duties as a bishop would allow him to remain on the schedule.

In an interview with The Tidings, newspaper of the Los Angeles Archdiocese, he said his main responsibility will be to serve as auxiliary bishop. “I have to be present to the people of the archdiocese,” he said.

For those who don’t watch TV or videos, Bishop-designate Barron also has written 10 books and does radio commentary. His book “The Strangest Way” took second place in the 2003 Catholic Press Association’s book awards for best popular presentation of the Catholic faith. There’s also a 300-page stand-alone “Catholicism” book that complements the DVD series.