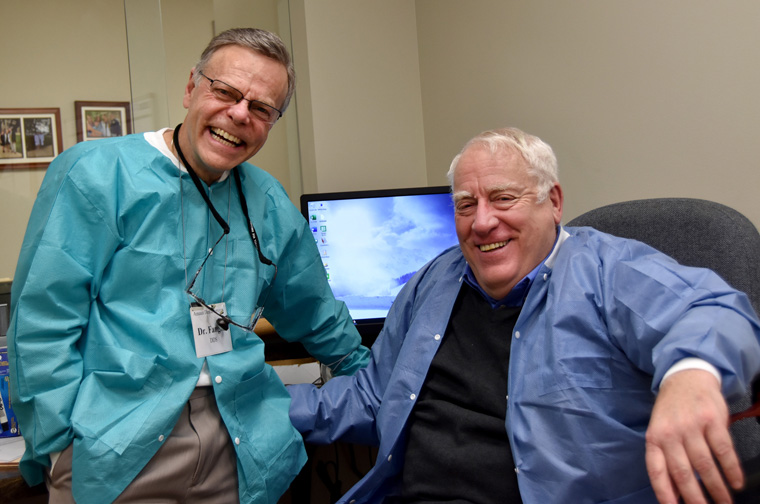 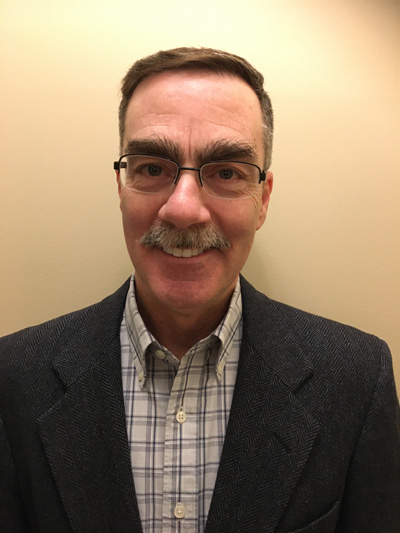 Dr. John G. O’Brien, of Liverpool, says, “I think we all realize in … health care that our patients really care about us, and numerous patients tell me they’re praying for us.”

“It’s very difficult because we’re trying to do a lot of the work over the phone,” said Dr. John G. O’Brien, of Liverpool, a family practitioner who is the New York State director of the Catholic Medical Association.

Dr. O’Brien said that on a single day a couple of weeks ago, he had 20 patients on his schedule. But on a similar day last week, he had four patients on the schedule and he ended up doing 20 virtual visits over the phone.

“You don’t get the [insurance] reimbursement that you need to try to continue running a practice,” he said of virtual visits with patients, “so we’re struggling like every other industry and we’re doing the best we can.”

He said a lot of his job now “is counseling people and reassuring people. The anxiety level of many, many patients is extremely high, and I think when they hear a comforting voice of their doctor talking about it,” they can be reassured “that there will be an end to this.”

“So, we’re trying to be very encouraging to everybody and telling them that things are going to be OK, and just to try to stay calm, help people. If you know of older people that need help and you need to get their medicine, check in on them. It’s very encouraging how people are trying to work together.”

Dr. O’Brien said doctors were “trying to screen people so there’s not contamination and things like that; we have a big enough waiting room so people can sit quite a distance from each other. … Most offices are doing additional cleanings other than what they would normally do — special cleanings on the weekend, things like that.”

He said patients wonder whom to turn to. “A lot of times,” he said, “people will turn to their pastors, they’ll turn to their doctors, turn to people they trust. … If I can talk to them for 10, 15 minutes and help them get through this difficult time, that’s what we went into medicine for — to help people.”

Innovators, he said, include the billing people and the nurses that are triaging calls.

“We’re going to have to look into a lot of options, job sharing,” he said, noting his responsibility to his employees. Everybody is chipping in at the office, he said: “It’s amazing how people come together.”

Dr. James L. Mostrom, of Fayetteville, an anesthesiologist, was reached by phone after he had prayed the rosary with his wife on the Feast of St. Joseph, as Pope Francis had suggested to Catholics around the world.

Dr. Mostrom said work now is “definitely different, that’s for sure. And a little strange as we’re sort of getting used to making the necessary changes that we have to do in order to take care of our patients properly — protect them as well as ourselves. So it’s definitely an adjustment and a fairly rapid one. … After this week, we won’t be doing any elective cases that can wait more than a couple months.”

He anticipates he will be called to assist with more patients who require respiratory assistance, and “we must assume that they’re asymptomatic carriers now.”

Asked what makes him get up and do it every day, he said: “I’m a physician so I really feel like I have a responsibility to go in and take care of patients. If I don’t show, then one of my colleagues has to be there.”

A person who feels ill should not just show up at an emergency room without some advance notice, he said; it takes time to prepare and to don the protective equipment.

Dr. Mostrom said that if everybody does his or her part and “treats this seriously like it is, I anticipate that we’ll get through it all right.”

Dr. David Dasher, the dental director at Amaus Dental Services, which offers free care in downtown Syracuse to people who are uninsured, homeless, or unemployed, said the clinic is closed for now. He said the American Dental Association has recommended that all dentists see only emergency patients, and Amaus is not an emergency clinic. Dr. Dasher said Amaus also wanted to be consistent with Onondaga County’s move in closing all the schools.

He noted that health-care workers are on the front lines.

“I have a couple of children who are physicians,” he said, “and some areas are running short of the kind of protective masks and other protective equipment that the medical providers need, so that’s a concern. They are concerned about protecting themselves so that they don’t bring any of that virus home to their families.

“And I also have a son who’s a police officer, and that’s another first responder, and they also are very concerned about that.”

Deacon Dr. Robert Fangio, Director of Deacon Personnel for the diocesan Office of the Permanent Diaconate, is retired from his private dental practice but he works as a volunteer dentist with Dr. Dasher at Amaus.

Dr. Fangio was reached as he walked in Burnet Park in Syracuse. He saw “young and old alike. Some are running, some of the seniors are just walking, and some of them are sitting on park benches, just to get out and to get away from television and just relieve a little bit of stress and … cabin fever.”

He said health-care providers are now at risk physically, psychologically, and emotionally. And those providers who are spiritual, he said, “would also feel challenged at this point to kind of put this into the proper spiritual perspective when they’re feeling the stress of … what they’re going through.”

He added: “I would think every health-care professional does what they feel they were called to do in life, which was to take care of those who are in need physically. It’s what their passion is, it’s what their calling is.”

Dr. Fangio said people should now be minimizing the work of health-care providers.

“If we don’t take care of our health-care workers,” he said, “they’re not going to be able to take care of us. We have to help them along the way.”