Meet the ‘Voice of the Chancery’ 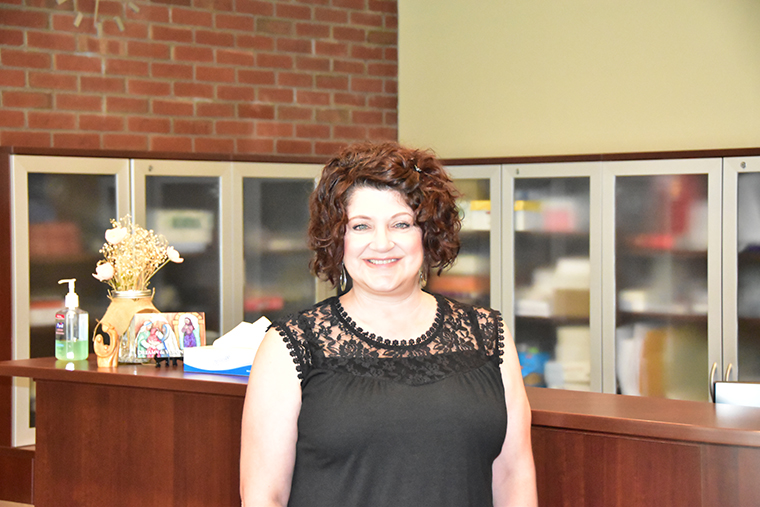 She has a smiling face and, perhaps more importantly, a smiling voice. She is typically the first person people come in contact with when they call or visit the Chancery offices of the Diocese of Syracuse. Her typical day requires her to be part theologian, part psychiatrist, part hostess extraordinaire and smatterings of many more admirable qualities.

She is Christine Werbeck, the newly appointed Chancery office manager whose home base is the front desk of 240 East Onondaga St.

“I’ve been involved in church since 1995, helping with St. Cecilia’s youth group as well as at St. Charles-St. Anne’s,” Christine shares. A cradle Catholic, Christine attended Holy Family School in Fairmount for elementary education, going on to graduate from the West Genesee school system. She is trained as a legal secretary, having worked in various law firms as well having some retail and customer service experience earlier on in her work career.

She also taught dance classes, having been a student herself since the age of five. It was while teaching a group of young students that another diocesan employee, payroll manager Carol Rojek, whose daughter was in the class, suggested that Christine apply for a new position that had been created. The rest is history.

Coming to work at the Chancery in 2014 “was a blessing” according to Christine. The new position was in support of Msgr. James Lang, the Vicar for Parishes, in pastoral planning. She eventually added support of Sister Laura Bufano in her role with pastoral leadership.

As of July 1, Christine is now the Chancery office manager. “It’s been a great move; I’m very happy,” she said. She added that when the position was offered, “Danielle (Chancellor Danielle Cummings) said, ‘We know you want to someday retire from here’ and I said, ‘Yes, I do!’ Danielle said that’s part of the reason for this promotion, that we need stability. That’s why we’re asking.”

So, what is it like to be the first face one sees upon entering the Chancery, the first voice they hear when calling?

“It’s a big responsibility,” Christine reports. “Sometimes I’ll get people on the phone who are very upset over something, and they just need to vent about it. We’ve had people who call who really have no reason to call. They may be elderly, have no one who visits them, and they just want to talk a little bit. It’s patience, you have to be patient with people.”

Christine knows that faith is at the core of her duties. “It’s all about putting out the mission of the diocese. Jesus said, ‘Love one another as I have loved you,’ and treat your neighbors the way you want to be treated. That’s the goal … that’s what I try to do.”

While many offices today greet callers with a recording, Christine says callers tell her that “it’s nice to hear a voice.” She adds that “if they are upset, I’ll take extra time, get all their information, and then I assure them that I will pass it on. Often they say, ‘Thank you for being so kind.’ It’s about taking your time and helping people. Empathy is the most important thing.”

When told that she is a blessing to have as the first contact person, she replies that “I’m blessed, and you want to give that blessing out to other people. It’s a great place to work. We’re like a family here. … We really are.”