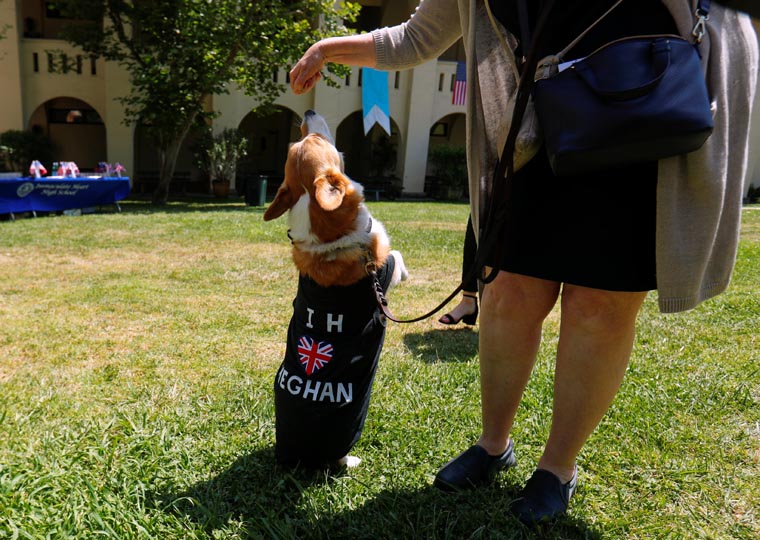 WASHINGTON (CNS) — Royal wedding fever has caught on in many places, but it has a particular soft spot at Immaculate Heart Middle School and High School outside Los Angeles, the school Meghan Markle attended from seventh to 12th grade.

The school is located more than 5,000 miles from St George’s Chapel at Windsor Castle in England, where Markle and Prince Harry’s May 19 wedding is taking place, but the California school bridged this gap during an outdoor pre-wedding celebration May 15.

Students waved British and American flags, toasted their famous alumna with glasses of lemonade, listened to student speeches and did a group dance all while local and international TV and print reporters mingled among them.

The students at the all-girls school were thrilled for the 1999 graduate’s big day but they were also proud of the humanitarian and activist work the actress has already done.

“I know that I’m not going to marry a prince … but it makes me feel like, as a woman, I can do anything, and I can be empowered by Meghan,” seventh-grader Amina Brenlini told Reuters during the event, adding that Markle is her “biggest inspiration.”

In a speech during the celebration, Mia Speier, the high school student body president, praised Markle for her dedication to service.

“The idea that someone like her, who has had an upbringing so similar to ours, will now be able to voice her concerns on a global platform as an internationally recognized figure is a story that impacts so many young women, especially the young women at our school,” said Speier.

Stella Lissak, middle school student body president said Markle’s humanitarian work showed that “we at Immaculate Heart truly are women of great heart.” Highlights of the speeches were posted on the school’s website.

The school, founded in 1906 by the Sisters of the Immaculate Heart of Mary, has mission-style terra cotta roofs and is located just a few miles from the landmark Hollywood sign.

Many of the 674 students have been pretty excited to say the least about the royal wedding since the engagement was announced last November. At the time, the communication director for the school, Callie Webb, told Catholic News Service that some of the students had never heard of Markle and others knew every detail about her 15-month romance with Prince Harry, her engagement, her TV career, activism and now- discontinued lifestyle blog, The Tig.

Early on, the school tried to put the engagement news in perspective, announcing when the news first broke in a Nov. 27 tweet: “Over 10,000 women of great heart and right conscience have graduated from Immaculate Heart, and we are proud to count actress and humanitarian” Markle among them.

It posted a similar message that day on its Facebook account but added that as a global ambassador for World Vision Canada, Markle campaigned for clean, safe drinking water. And as a U.N. Women’s Advocate, she has spoken up for women’s rights and gender equality.

In other words, the school had already been proud of its graduate for a long time.

But they also are fully embracing Markle’s upcoming role as Duchess of Sussex.To demonstrate their dedication, and also witness history, some students, alumnae and families will attend a wedding viewing party May 19 at the school that will start at the wee hour of 3 a.m. (PDT).