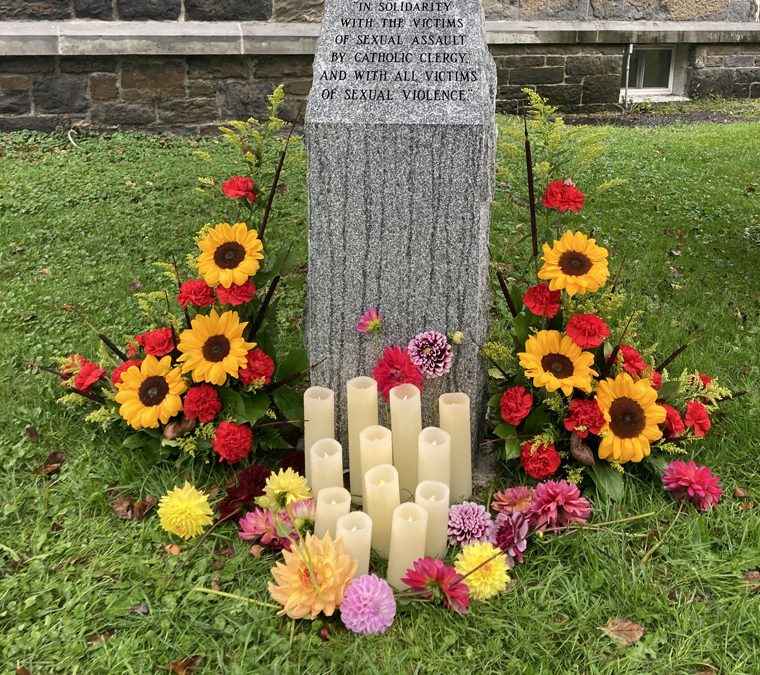 To promote healing and a commitment to change, St. Mary Church in Hamilton dedicated a perpetual Memorial to Victims and Survivors of Sexual Violence on Oct. 3 in the garden of the church.

The memorial, an obelisk in Vermont granite, is dedicated to those who have suffered sexual violence at the hands of the Catholic clergy, and to all victims of sexual assault. The memorial was brought about by the Sexual Assault Response and Prevention (SARP) team of Hamilton.

The pastor of St. Mary’s, Father Jason Hage, believes that supporting victims of sexual violence is the duty of every Catholic, and part of the Church’s mission to uphold the human dignity of all people.

Though Father Hage is one of SARP’s most enthusiastic supporters, he isn’t himself a member. “This is work that only lay people can do,” says SARP’s Dr. Jennifer Meyers, a Hamilton pediatrician and Catholic convert. “All of SARP’s members are committed Catholics, and parents of children. Some of us work professionally in the field of sexual assault. Some are themselves victims of clerical sexual assault. We’re deeply committed to fixing this problem, and it has to be fixed from the grass roots upwards.”

Rebecca Shiner, a Colgate University psychologist, said, “This memorial isn’t just for people harmed by priests or nuns. It’s for everyone—women and men—whose lives have been affected by rape and sexual assault. It’s for families and friends of survivors, who also have to carry a burden. And it’s a visible symbol, a promise if you like, that as Catholics we’re committed to doing things differently in the future.” (Photo courtesy Father Jason Hage)