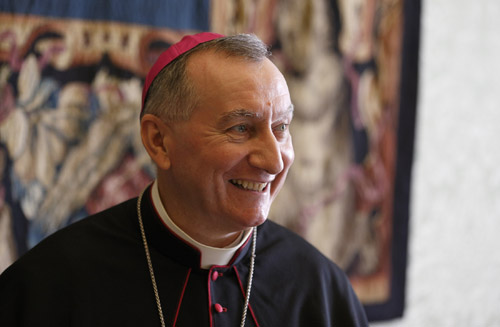 VATICAN CITY (CNS) — Arriving in the United States from Cuba, Pope Francis “will enter as a migrant” as millions of people have done before him, said Cardinal Pietro Parolin, Vatican secretary of state.

The cardinal, who will accompany the pope on his Sept. 19-27 visits to Cuba, the United States and the United Nations, said immigration will be one of the main topics of the pope’s speeches, along with the need for greater freedom for the people of Cuba and a global call for “integral ecology,” which is an approach to safeguarding all of creation, including the sanctity and dignity of human life.

Immigration will be “one of the most important themes” of the pope’s visit, the cardinal said in an interview with the Vatican television center on the eve of the trip. The United States is “a country with a long history of immigration and, at the same time, a long history of openness, welcome and integration of the various waves of immigrants who arrived.”

The U.S. heritage of welcoming newcomers, he said, should be valued as a treasure to be built upon in “facing the modern challenges of migration and resolving cases that are still painfully open.”

Immigration is an issue close to the heart of Pope Francis, whose family immigrated to Argentina from Italy, the cardinal said. The pope hopes to be able to offer some points for consideration in the current U.S. debate on immigration reform.

Pope Francis also is likely to encourage a new season of greater freedom and respect for human rights in Cuba, Cardinal Parolin said.

Asked about the economic embargo the United States has had in place against Cuba since 1960, the cardinal said the Holy See has always been against the embargo and consistently has supported United Nations’ resolutions in favor of lifting the economic sanctions on the island.

“There is a simple fact and that is that the embargo, this kind of sanction, provokes poverty and suffering” among a country’s population, he said. In addition, the Vatican hopes that lifting the embargo will have the impact predicted by the Cuban bishops, which is that greater contact with the United States and increased trade “also would bring greater openness from the point of view of freedom and human rights, a flowering of these aspects that are fundamental for the life of persons and peoples.”

The invitations for Pope Francis to address a joint meeting of the U.S. Congress and to speak to the General Assembly of the United Nations are special opportunities, he said. The pope is likely to relaunch the central messages of “Laudato Si’,” his encyclical on the environment, which “takes into consideration the human person within creation,” urging respect for “the transcendental nature of the person, from which flows his or her fundamental rights, especially the right to life and to religious freedom.”

Pope Francis, he said, will call people “to change our lifestyles so that we can be custodians of creation, as he says, and not dominators or aggressors.”

Cardinal Parolin said he knows some people in the United States and elsewhere have read the encyclical as an overly harsh attack on capitalism. “I think the pope is touching fundamental points,” the cardinal said, and calling for reflection.

“It is realistic to take account of the fact that things are not going in the right direction” with the global economy, the cardinal said. While people may have different opinions on the causes and possible solutions, “a change is necessary.”

Cindy Wooden will travel with Pope Francis to Cuba and the U.S. Follow her on Twitter @Cindy_Wooden