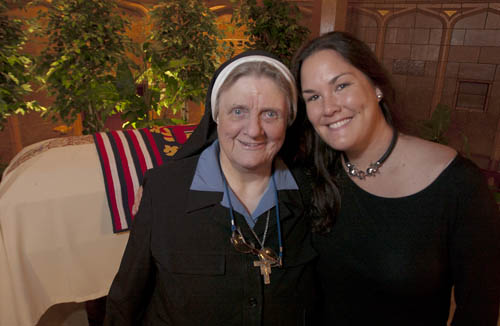 Kate Mahoney, right, smiles alongside the late Sister Mary Laurence Hanley, OSF, who was the director of Mother Marianne Cope’s cause, in this archive photo. (Sun photo | Paul Finch)

In July 1992, Kate Mahoney was 14 years old and, along with her mother and father, was visiting her grandmother in Syracuse. Kate and her family had just returned to the U.S. after spending two years living in Ireland and were planning to return to their home in Virginia at the end of the summer.

In August, Kate started to feel unwell. Doctors thought she might have a “smoldering appendix” and advised her parents to keep an eye on her symptoms. Within a week, Kate was at the emergency room at Crouse Hospital undergoing a battery of tests. Doctors soon discovered and operated to remove a stage-four malignant germ cell ovarian tumor the size of a basketball.

Kate’s doctors treated the rare cancer with an aggressive protocol designed for adults. She suffered terrible side effects from the chemotherapy treatment, but enrolled at Bishop Ludden Jr./Sr. High School in September. By November, her mother Mary recalled, the cure seemed to be doing more damage to Kate than the cancer. In December, Kate was admitted to the hospital again and, following a procedure to remove excess fluid from her body, went into cardiac arrest that lasted 25 minutes. She experienced multiple organ system failure and required the support of machines.

Congressman James Hanley, friend and former boss of Kate’s father, was having a holiday dinner with his cousin, Sister Mary Laurence Hanley, OSF, and told her about Kate. Sister Mary Laurence, who was the director of the cause for Mother Marianne Cope, called Mary and asked if she could visit Kate. Mary knew of Mother Marianne from her days as a student at the Convent School, and was very open to the idea of channeling prayers to her.

Sister Mary Laurence visited in early January, prayed for Mother Marianne’s intercession, and touched Kate with a relic (though, of course, it is the prayer that is most important, not the presence of the relic).

An extensive, non-denominational prayer network, including the Mahoneys’ friends and family, the Sisters of St. Francis, and many others, prayed for Mother Marianne’s intercession. By the middle of the month, Kate’s organs regained their functions.

“It was absolutely extraordinary how these individual organs were recovering,” Mary recalled.

After 47 days in the intensive care unit, Kate was discharged to progressive care. “The discharge report stated that her recovery could not be explained medically,” Mary said.

In 2004, Pope John Paul II affirmed that Kate’s recovery from multiple organ failure was a miracle due to Mother Marianne’s intercession. Mother Marianne was beatified May 14, 2005.

Kate’s recovery took a very long time, during which she had to re-learn how to eat and walk and hold a pen, but today, Kate is healthy. Having lived more than half her life as — in her words — the vehicle for Mother Marianne’s miracle, she has a unique perspective on the world and her role in it. Her faith has been enhanced by her family’s experience, she said, and she takes seriously what she feels is her duty: to honor all people, just like Mother Marianne. 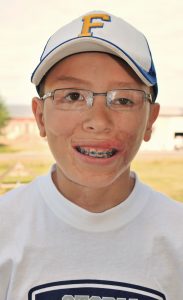 Jake Finkbonner is pictured in a family photo taken in 2011 after his last reconstructive surgery. On Dec. 19, 2011, Pope Benedict XVI signed a decree acknowledging a miracle attributed to the intercession of Blessed Kateri Tekakwitha in Jake’s recovery from necrotizing fasciitis, a rare and potentially fatal disease. (CNS photo | courtesy Finkbonner family)

In the last minute of his last basketball game of the 2006 season, 5-year-old Jake Finkbonner tossed the ball toward the net. A moment later he was pushed from behind by another player and was sent flying face-first into the base of the portable hoop. That night his mother, Elsa, tried all the usual remedies to reduce the swelling on his fat lip, but nothing worked. And just two days after his accident, Jake was being airlifted to Seattle Children’s Hospital to treat the deadly and aggressive flesh-eating bacteria that was already attacking the skin on his face and chest.

When a patient contracts Strep A, or necrotizing fasciitis, usually the only way to beat the infection is to amputate the infected limb. Because Jake’s infection had started in his lip and raced across his face, amputation was not an option. His doctors put him in a medically induced coma and performed daily operations to try to remove the infected tissue and get ahead of the infection. But the bacteria were just too fast. Jake’s condition went rapidly downhill.

The Finkbonner’s pastor, Father Tim Sauer, suggested that the family and the thousands of people around the world who had heard about Jake pray to Bl. Kateri Tekakwitha for her intercession. Jake clung to life.

“About two weeks later, [my husband’s] aunt and her friend came to visit at the hospital. The friend said her name was Sister Kateri. I just looked at her and thought, ‘You are a messenger from God that everything’s going to be okay,’” Elsa Finkbonner recalled.

Sister Kateri Mitchell, executive director of the Tekakwitha Conference National Center in Montana, brought a relic of Bl. Kateri Tekakwitha and a prayer card. They all prayed over Jake. That was the last day that Jake’s infection progressed.

Jake doesn’t remember much from the time he was in the coma, save for an incredible trip he can recount with clarity.

“I remember laying in the hospital and feeling myself growing lighter. I rose up to heaven,” he said. He recalls seeing angels playing instruments and feeling a sense of freedom and comfort he “never wanted to let go of,” he said. He says he saw his Uncle Tom, who had passed away just before Jake’s accident at the basketball game, and gave him a big hug. He then says he saw God.

“I ran to Him and gave Him a huge hug. We talked about heaven and I asked if I could stay with Him there. He said, ‘No, your family needs you.’ And then His heart left His body and came into mine, and I had two beating hearts for a second. He told me He’d always be with me,” Jake said. He says he then flew over the hospital, where he saw his family members crying, and over his house, where he saw his sisters playing with their dolls and his mother making coffee. He could see their sadness and knew he had to go back. Then, with a sound like “1,000 pennies hitting the sidewalk,” Jake says he came back into his body and awoke to the sound of his doctor and parents talking. His long road to recovery had begun.

After 22 grueling surgeries and weeks of emotional and physical turmoil, Jake and his family finally walked out of the hospital on Good Friday of 2006. Father Sauer helped the Finkbonners get in touch with the vice postulator for Bl. Kateri Tekakwitha’s cause. A lengthy, meticulous investigation by the Vatican ensued. Finkbonner completed mountains of documentation, and her family, members of their church, and Jake’s doctors — doctors, Finkbonner said, who are not Catholic — sat for extensive interviews. All signs pointed to a recovery that had no medical explanation. On Dec. 19, 2011, Pope Benedict XVI signed a decree affirming that Jake’s inexplicable recovery from the lethal infection was indeed a miracle due to the intercession of Bl. Kateri Tekakwitha, clearing her path to sainthood.

Today Jake is a healthy seventh-grader at Assumption Catholic School in Bellingham, Washington, who excels in math and still loves basketball.

He and his family will attend the canonization in Rome and they have been selected to receive Communion from Pope Benedict at the Mass. Jake is “a little bit nervous” about being part of the celebration, but feels that it is a “special thing, and one I will try to remember forever,” he said.

Elsa Finkbonner said she is first and foremost thankful that Jake is alive and well, but that being a part of Bl. Kateri Tekakwitha’s story has been “an absolute blessing.”

“A woman has become a saint based on our son’s story,” she said. “The feeling of joy is so overwhelming.” 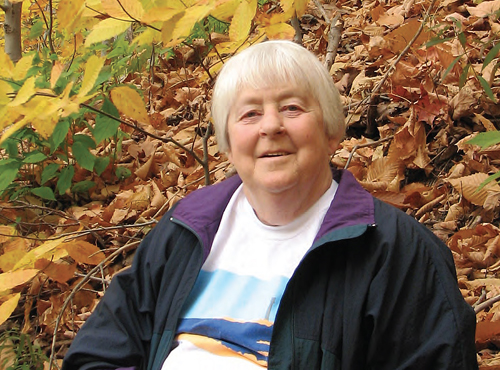 Sharon Smith, whose miraculous recovery from pancreatitisled to Bl. Marianne’s canonization, is pictured in this archive photo. (Photo courtesy Sisters of St. Francis of the Neumann Communities)

After passing out at home, Sharon Smith of Chittenango was diagnosed in April 2005 with pancreatitis and a severe infection that was destroying her organs. She spent weeks in a medically induced coma at St. Joseph’s Hospital Health Center in Syracuse. Sharon later learned that the pancreatitis was caused by anti-rejection medication she took to keep her transplanted kidney healthy. Doctors did everything they could for Sharon, but told her she was unlikely to survive.

Sharon was hospitalized for nearly a year, spending 9 months on a feeding tube. In the fall of 2005, her doctor removed the tube. Sharon thought her end was near, but the doctor surprised her by telling her to order a sandwich for lunch.

“I was amazed,” Sharon recalled. “I had been told all this time I wasn’t going to make it.” (Sharon said she ordered ham and cheese on rye.) She was released from the hospital in January 2006.

In December 2011, Pope Benedict XVI affirmed Sharon’s recovery as a miracle due to Bl. Marianne Cope’s intercession. This miracle cleared Bl. Marianne’s path to sainthood. Sharon will travel to Rome for Bl. Marianne’s canonization Mass, during which she will present Pope Benedict with a relic of the soon-to-be saint.

Sharon, retired from the Navy and as head custodian of a middle school in Oneida, now volunteers her time at Francis House, a home for the terminally ill in Syracuse. “It’s a way to pay back all the good that’s been done for me,” she said. She remains soft-spoken, affirming that she’s “just the vehicle” for the miracle.

“I believe in miracles,” she said. “I just never thought I’d be part of one.”