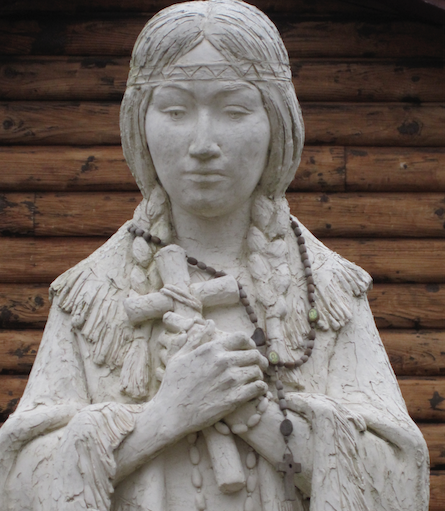 A statue of Bl. Kateri Tekakwitha stands at Our Lady of Martyrs Shrine in Auriesville, N.Y. (Sun photo | Katherine Long)

Her name was Kateri Tekakwitha. Translated from her native Mohawk, it means “Catherine who bumps into things,” “Catherine who moves things out of the way,” “Catherine who puts things in order.” For hundreds of years the faithful have prayed for her intercession, asking for her help in removing obstacles and impediments from their lives. They have prayed, too, that this daughter of the Mohawk Valley and convert to the Catholic faith would be elevated officially to the status she already held in their hearts. Finally, those prayers have been answered. Her path has been cleared and all has been put in order: Blessed Kateri Tekakwitha will become a saint.

The woman known today as Bl. Kateri Tekakwitha — pronounced ‘Gaw-da-lee Da-gaw-quee-dah’ — was born in the Mohawk settlement at Ossernenon (now Auriesville, N.Y.) in 1656. Her mother, Kahenta, was Algonquin and a convert to the Christian faith. Her father, Kenhoronkwa, was a chief of the Mohawk Turtle Clan and practiced the spiritual tradition of his ancestors.

When Tekakwitha was about four, smallpox invaded her village. The disease was merciless, killing many including Tekakwitha’s parents and brother. Tekakwitha managed to survive her infection but was left physically weak, with impaired eyesight and scarred skin.

Tekakwitha was adopted by her father’s brother and eventually moved north of the Mohawk River to Caughnawaga (now Fonda, N.Y.). She was raised in the Mohawk tradition, learning to gather wood, craft intricate beadwork and participate in the ceremonies and festivals of the village. As was the custom, marriage for the young Tekakwitha was discussed, but she resisted in her quiet, modest way.

In 1670 a Catholic mission was established at Caughnawaga, and for several years Tekakwitha observed the Jesuit “black robes” with interest, perhaps remembering the prayers her mother said years before. But it wasn’t until a chance — or divinely arranged? — meeting with mission pastor Father Jacques de Lamberville that she confessed her heart’s true desire: to be baptized in the Church.

Tekakwitha began formal religious instruction, and in spite of his initial reservations about converting the adopted daughter of a chief, Father de Lamberville soon discovered a girl wise beyond her years and full of love for Christ. On Easter Sunday 1676, 20-year-old Tekakwitha was baptized and took the name Kateri, for St. Catherine of Siena.

Kateri Tekakwitha faced persecution, mockery, even threats after her conversion; she bore all with her trademark quiet grace and patience. Ultimately, though, with the help of Father de Lamberville and three fellow Native American converts, Kateri Tekakwitha traveled more than 200 miles to a settlement of Christian Native Americans near Montreal, Quebec. She arrived bearing a note from Father de Lamberville saying he was sending his fellow priests a “treasure” and to guard it well.

Kateri Tekakwitha’s relationship with Christ deepened in her new home. She earned the respect and love of her companions for her fervent faith and devotion. She dedicated even her small tasks around the settlement to God.

Her great faith and zeal were rewarded on Christmas Day 1677 when she received her First Holy Communion. At the time, receiving Communion so quickly after baptism was a rare privilege. So, too, was her admission to the Holy Family society, a reflection of her grace and virtue.

While visiting women religious in Montreal, Kateri Tekakwitha found her life’s calling: to be a bride of Christ. She could not join their order, but on the Feast of the Annunciation 1679, she made her own vow of perpetual virginity and dedicated her life to caring for the sick and elderly and teaching children about the faith.

Already weak from her childhood illness, Kateri Tekakwitha’s health began to fail. Priests brought Communion to her bedside and administered Viaticum. On Wednesday of Holy Week, April 17, 1680, at just 24, Kateri Tekakwitha died with Jesus’ name on her lips.

Messengers went out from the mission after Kateri Tekakwitha’s death, spreading the sad news that “the saint is dead.” Though many thought her saintly while she was still alive, and still more have considered her a saint in the time intervening, Bl. Kateri Tekakwitha’s cause has taken many years to progress officially.

The Catholic Church has a long tradition of recognizing as saints people whose lives were outstanding examples of faith in practice. The process of determining sainthood proceeds in three phases, during which the Church makes a thorough investigation of the person, her life and the miracles attributed to her intercession. The cause is directed by vice postulators, who collect and present information on the saint-to-be to  Rome.

Kateri Tekakwitha’s cause for canonization was accepted by the Congregation of Rites in 1939. On Jan. 3, 1943, Pope Pius XII declared the young woman’s virtues heroic and bestowed on her the title Venerable. On June 22, 1980, Pope John Paul II declared Kateri Tekakwitha Blessed. And on Dec. 19, 2011, Pope Benedict XVI signed a decree recognizing the final miracle needed to canonize Bl. Kateri Tekakwitha: Because of her intercession, young Jake Finkbonner had miraculously recovered from a fatal skin infection.

“When we heard the news, we were both filled with such emotion,” Father Paysse said of himself and Msgr. Lenz. “It is just so wonderful. Her canonization not only recognizes her holiness and witness to Christ, but also the great contribution of Native American people in the U.S. to the Church. This is a real gift.”

The date for the canonization ceremony has not been set, but on that long-awaited day, Bl. Kateri Tekakwitha will become the first Native American saint from the U.S. This is the fulfillment of a long-held dream for many in the diocese, especially the members of a small but dedicated group at St. Lucy’s Church in Syracuse.

The committee is chaired by Emily Garrow-Stewart, who is Mohawk and grew up hearing the story of Kateri Tekakwitha in her home.

“She has been a part of my life since I was a child,” Garrow-Stewart said. “There was always a picture of her in the house. She is such a good role model and example. In my mind, there is always such a light about her.”

Garrow-Stewart said she has seen many examples of Bl. Kateri Tekakwitha’s powerful intercession in her own life, most recently when her son faced a serious medical procedure.

“I never prayed so hard,” she said. “That is when she is with you, though, when you are really down. I know she is always around me. I feel her in my life always.” Her son, she said, is on the mend.

Others connected with the committee have known Bl. Kateri Tekakwitha’s presence as well.

Jim Howe, a parishioner at St. Ann’s Church in Manlius, knew something of Bl. Kateri Tekakwitha when growing up, but said his first real experience with her came when his infant daughter was diagnosed with cancer.

“I’m not sure why, but in those dark days of dealing with her illness and hospitalization, I said a prayer to Kateri, asking for her help. My daughter survived the operation [to remove her tumor], somehow made it through the hair loss, nausea and brutality of chemotherapy, and today is a healthy college student who hopes to be a pediatric cancer specialist herself,” he said.

Though he can’t prove any divine intercession, Howe said the experience led him to spend about 10 years on the committee, where he was able to learn more about Bl. Kateri Tekakwitha’s life, the lives of Native Americans in the region, and the importance of Kateri in the lives of the Mohawk community.

Carolyn Kocher’s mother, Josephine Shenandoah, was a member of that community, and a founding member of the Kateri Committee. Shenandoah, who was Mohawk, grew up on the Akwesasne reservation; she passed away in 1996. Kocher said committee members came to her mother’s bedside to pray and sing in Mohawk during her final days.

“The language meant so much to my mother. She didn’t know if she would ever hear those words again, and I know it brought her so much joy at the end,” she said.

And when Kocher lost her son in 1997, members of the committee came to her home to perform a blessing.

“We had such a feeling of peace again, a peace achieved through the group working in Kateri’s name,” Kocher recalled.

Kocher said she got goosebumps from head to toe when she heard the news of the canonization.

“It is just so amazing. We have been waiting and waiting for this. I know my mother would be so happy it is finally happening,” she said.

Garrow-Stewart is also thrilled that Bl. Kateri Tekakwitha is finally getting the recognition she has long deserved — though she is quick to point out that many already considered her a saint. Garrow-Stewart also said she is proud to see a Native American saint named in her lifetime, as are many in the Native American community.