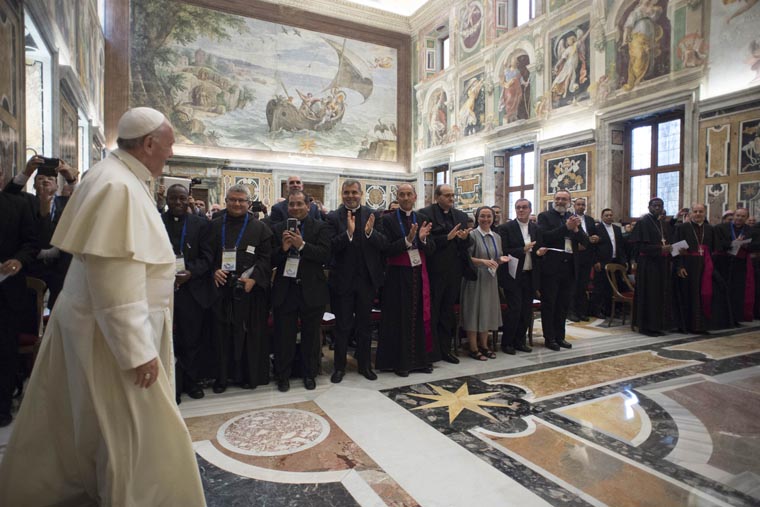 VATICAN CITY (CNS) — The Catholic Church does not have “a product to sell, but a life to communicate: God, his divine life, his merciful love, his holiness,” Pope Francis told national directors of the Pontifical Mission Societies.

The mission societies were founded to educate Catholics about the needs of the church in mission lands, to foster their prayers for the missions and to raise money to support them.

“You are well aware of my concern about the risk of your work being reduced to the merely financial aspect of material assistance, turning the societies — despite their Christian inspiration — into agencies like any others,” the pope told the national directors June 1.

The best way to fight such a temptation, he said, is to begin a process of renewal based on the conversion of each person involved — those who work for the mission societies and those who support them.

Pope Francis noted that he has called for a special “extraordinary missionary month” to be celebrated in October 2019 with the theme, “Baptized and Sent: The Church of Christ on Mission in the World.”

The renewal of the mission societies should coincide with preparations for the observance, he said. “Things always must be renewed: Renew one’s heart, renew one’s works, renew organizations because otherwise they will end up in a museum.”

The necessary “missionary conversion of the structures of the church,” including of the mission societies, must be based on “personal holiness and spiritual creativity,” Pope Francis said. “It is not merely about renewing the old, but about letting the Holy Spirit create newness, making all things new.”

Missionary conversion, he said, “means an integral formation that involves our daily lives, our entire life, one in which our minds, hearts and bodies are caught up in love for the Lord Jesus, in a passionate desire to proclaim him and to bear witness to him with apostolic courage in the mission of his church.”

Responsibility for the church’s missionary activity belongs to every baptized Catholic and that is what the mission societies are called to promote, he said.

“The call to mission is a call rooted in baptism and addressed to all the baptized,” he said. “Mission is a ‘being sent forth’ that brings about conversion both in those who are sent and in those who receive their message.”

“In Christ,” he added, “our life is itself a mission! We are mission, because we are God’s love poured out, God’s holiness created in his own image.”