Monsignor holds the key to moving past the grudges 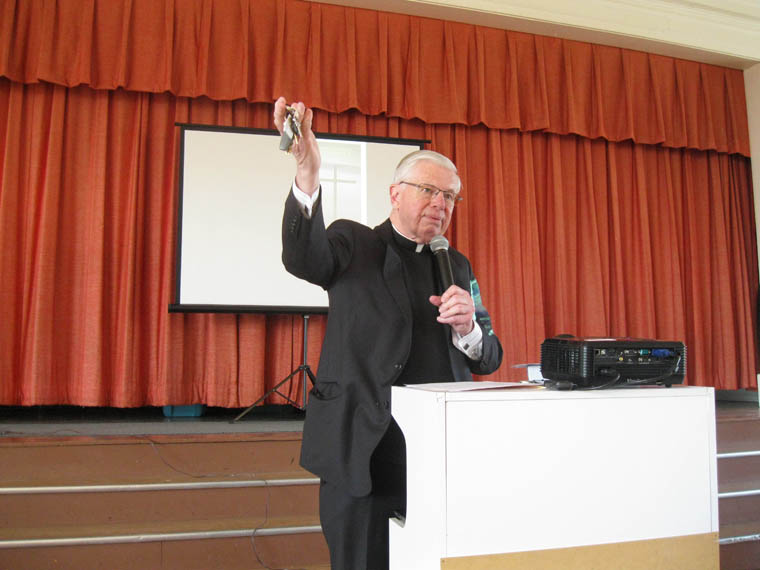 What a difference it can make to forgive everything, he says

Dangling a set of keys like a baby rattle, the monsignor challenged the audience to let go of the infantile anger.

“Give up the desire to get even,” Msgr. J. Robert Yeazel told a group of diocesan employees at the Lenten Soup & Scripture lecture on March 20, the first day of spring. “I have always used this analogy: Whenever we stay mad at somebody, what we have to do is we hand them the keys to our life. Here’s the keys. Here’s the keys to my blood pressure, my mind, my heart, my anxieties, my muscles. I’m going to give them to you.

“And you’re in control. So every time I hear your voice, every time I think of you, every time somebody mentions you, I get all tense [shaking the keys]. I want to take back my keys. Then I can be free.”

So the monsignor distributed skeleton keys to the audience members for placement on their dresser, as a reminder.

Msgr. Yeazel was raised in Syracuse and graduated from Christian Brothers Academy. He was ordained to the priesthood nearly 52 years ago. He has served as the pastor of parishes, secretary to two bishops, vice chancellor, chancellor, CFO, vicar for priests, and vicar general. When he retired in 2017, a fund was established in his name: The Yeazel Catholic Education Endowment Fund supports Catholic education in the elementary and high schools of the Western Region of the diocese. 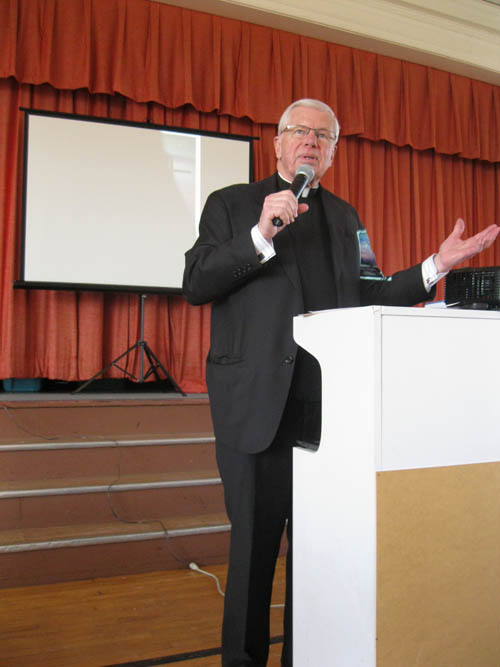 Msgr. J. Robert Yeazel says to stop identifying another person, or oneself, with a hurt that has been administered. “Look at other goodness that I have,” he says. “Look at all the goodness that other person has. … Give up the desire to get even.”

‘Choose to let it go’

Reacting to the monsignor’s Soup & Scripture address, diocesan Director of Evangelization Mary Hallman wrote: “We live amidst the constant drama of ‘you aren’t going to get me without me getting you back!’ When we hold onto hurts and regrets, we allow them to beat us — and others — down.

“We all have regrets. Msgr. Yeazel invited us to identify a particular regret, and choose to let it go, realizing that in the present, we are right where God wants us to be.”

This Lenten season, the focus of the Soup & Scripture talks is Matthew 16:3: “‘You know how to judge the appearance of the sky, but you cannot judge the signs of the times.’”

“I think one of the signs of the times, unfortunately, is the fact we have a lot of anger in our world,” Msgr. Yeazel said. “A lot of anger, a lot of hurts, a lot of regrets.”

“You know what the major regrets are for people in their 50s? Major regrets: Ending a relationship with somebody you loved. Not being more adventurous. Wasting time hating your body. That’s a big one. Taking life too seriously. That’s a MAJOR one. Not traveling more. Hanging onto grudges, and worrying about other people’s opinions. How many times have we done that? …

‘If only we trusted’

If one had taken a different road, how would it have turned out? The monsignor answered: “I think we ought to trust the Lord.”

He referred to Jeremiah 29:11: “For I know well the plans I have in mind for you — oracle of the LORD — plans for your welfare and not for woe, so as to give you a future of hope.”

“If only we trusted that where we are today is where the Lord would like us to be,” Msgr. Yeazel said.

He added: “I think with all of our regrets, we can … learn something that says to us: You might have regretted that for a while, but I’m not going to regret it any longer. … Maybe I learned something about myself about that, and now I want to move on.”

The offended person can move on, the monsignor said, by writing a letter to the offender “expressing your desire to let things go. You can send it or you can burn it, but it gets that out of you.” If the other person is deceased, he said, one can ask the Lord to deliver the message. Seeing everything as God does, he added, allows one to “forgive everything, and what a difference that can make.”

Suffering insults is another sign of the times. “What do we do?” the monsignor asked. “We avoid that person, we don’t speak, we brood, we stop praying as the Church, we stop going to church. Why? Is that hurting the other person, or is it hurting us? I think it’s hurting us. And how do we stop that?”

Mom has the answer

To answer, he cited a squabble with his brother in their boyhood: “What would my mother say? ‘I want you to stop there right now.’ So what would I say? ‘He started it.’

The monsignor sees a way to cure the hurt. “We forgive others,” he said, “not because they deserve forgiveness, but because we deserve peace. … We regain the wisdom that came from what happened to us and all that, but we release the pain, release the pain.”

That is where the skeleton key comes in: “If you have a regret,” the monsignor said, “a hurt that you’ve kept locked inside of yourself for however long, you take that key, you can let it go today. Take that key, put it on your dresser as a sign that you’ve finally, finally let go of that hurt or that regret, and finally you’ve unlocked that prison that kept it inside you, and today, and forever, we’re free, we’re free.” 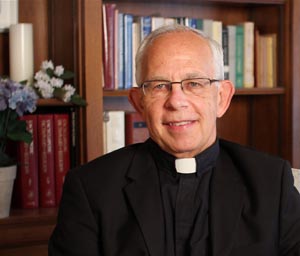 Father John F. Rose will be one of the speakers in the Spirituality of Aging Series at Le Moyne College.

A Spirituality of Aging Series of talks is scheduled for 1 p.m. on the following dates at Le Moyne College.

June 24: “What I have Learned at the Feet of Elders” — Mary Colleen Sinnott; Curtain Special Events Room.