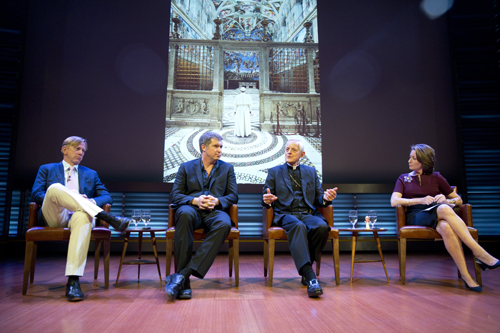 WASHINGTON (CNS) — A year ago on Christmas Day, National Geographic photographer Dave Yoder got an unexpected Christmas gift that he will never forget.

Over a six-month period, he had taken tens of thousands of photos for a planned cover story on Pope Francis for his magazine. But while he had taken many powerful photos, he was still searching for a cover photo, a single, striking image that would reflect this pope and his special role in today’s world.

Along the way, he had gained unprecedented access to the pope and the Vatican, after he befriended the photographers from L’Osservatore Romano, the Vatican’s newspaper, who offered him help and guidance. “I made sure not to get in the way!” Yoder said.

Then on Christmas Day 2014, Yoder saw the shot he had been looking for, unfolding before him for a few seconds. For one of the few times of the year, the Sistine Chapel was empty, and Pope Francis stood alone in the gateway to the chapel with his back to the camera, seemingly contemplating Michelangelo’s dramatic mural of the Last Judgment on the far wall.

“I knew it was the only shot I was going to get. My hands were shaking,” Yoder said.

One veteran Vatican photographer later said he believed that was the only photo ever taken of a pope alone in the Sistine Chapel. Yoder’s photo of that scene was used on the cover of National Geographic’s August 2015 issue titled “Pope Francis Remakes the Vatican,” and it also appears on the cover of National Geographic’s new book, “Pope Francis and the New Vatican.” That book features photos by Yoder and essays by Robert Draper, who wrote the magazine’s related cover story.

Those two journalists, along with National Geographic Editor-in-Chief Susan Goldberg, shared the stories behind that cover story and book in a September National Geographic Live panel discussion, held in the auditorium at the society’s headquarters in Washington. They were joined by Cardinal Donald W. Wuerl, the archbishop of Washington, one week before Pope Francis’ historic visit to the nation’s capital.

Reflecting on that photo projected on a screen behind the stage, Cardinal Wuerl noted that as the cardinals elect a new pope in a conclave, Michelangelo’s painting looms before them, reminding them that their actions will be judged by God.

“That’s what he (the pope) has to stand before every day in his ministry,” Cardinal Wuerl said. “This is a story of God’s grace, at work in that man in white.”

One of Yoder’s favorite photos of Pope Francis, which appears near the beginning of the book, shows the pontiff in St. Peter’s Square, tenderly embracing a young man wearing a ball cap.

“For me, it captures how compassionate Pope Francis is,” the photographer said. “He is exactly what he appears to be.”

Draper said one of the most moving parts of the project for him was traveling to Buenos Aires, capital of the pope’s native Argentina, and interviewing many of the pope’s friends. A paradox that he discovered was that before being elected pope, he was often known for his serious demeanor and as a simple man, lacking in ambition. Now as pontiff, Pope Francis’ warm smile and loving approach has captivated the world, Catholics and non-Catholics alike.

Pope Francis is witnessing to the Gospel in his own style, not changing church teaching, but inviting everyone “to be the best person they can be,” Cardinal Wuerl said. “He helps us understand that even if we’re not perfect, we’re still part of the family.”

Draper said Pope Francis offers what seems to be a “revolutionary” message for the church and today’s world: a call to go out and bring the Gospel to the periphery of society.

The book offers many unforgettable images of Pope Francis, such as him smiling as a young girl takes a selfie with the pontiff, a group of nuns exulting after seeing him, and the pope blessing a paralyzed man.
Goldberg jokingly asked Yoder how his assignment at the Vatican compared with earlier ones, like slogging through the Honduran jungle for months in search of a lost city. “To me, it was definitely more difficult navigating the Vatican,” he said, smiling.

Yet photographing Pope Francis, Yoder said, was “a remarkable experience. You couldn’t help but be caught up in the emotion or spirituality.”