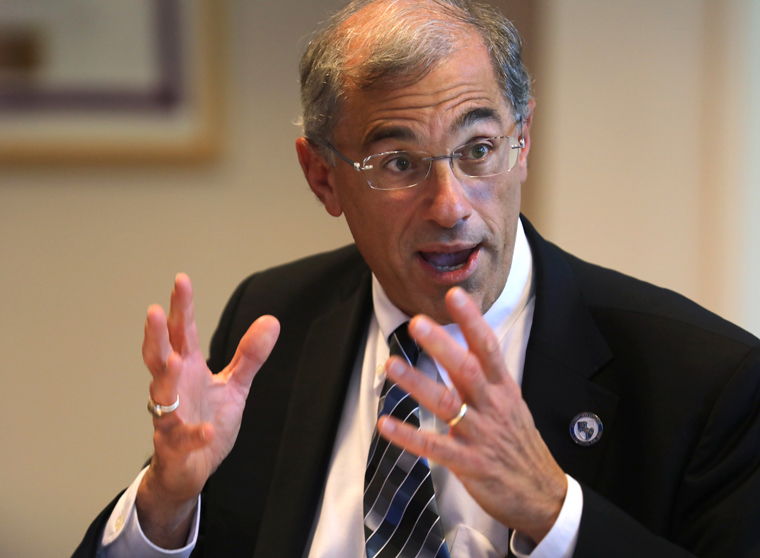 By Dennis Sadowski | Catholic News Service
WASHINGTON (CNS) — The National Review Board chairman called for changes to the “Charter for the Protection of Children and Young People” to “make it a less ambiguous document” because despite nearly every diocese meeting its standards in third-party audits, some bishops are facing scrutiny about their handling of reports of wayward priests.

Francesco Cesareo, the board’s chairman since 2013, told Catholic News Service Nov. 5 that board members have raised concerns for “a long time … that the audit instrument may not be getting at information that we need to get.”

He also expressed “frustration” that new questions have surfaced about how some bishops responded to clergy sex abuse, especially after pledging openness and transparency after the 2002 crisis exploded.
“This is much more of a crisis of a failure of leadership,” he said.

“It is frustrating because on the one hand, you know that the church has put in place all of these policies and procedures, which have definitely made a difference. All of these allegations are historic.

(There are) very few new ones,” he said.

“What’s frustrating is that there’s been this collapse in leadership,” Cesareo continued. “That’s the real frustrating part. There hasn’t been a recognition to the level of responsibility that needs to be taken on the part of leadership to address this in a way that minimizes this from possibly happening in the same way again.”

Cesareo’s concerns came in response to a report published Nov. 4 by The Boston Globe and The Philadelphia Inquirer newspapers that examined ways it said the U.S. bishops have failed to police themselves even since their 2002 gathering in Dallas about clergy sex abuse when they adopted the charter.

The all-lay National Review Board, established by the U.S. Conference of Catholic Bishops in 2002, oversees compliance by dioceses with the charter. It has no role in oversight of bishops.

Under the charter, each diocese and eparchy undergo an annual audit to ensure compliance with it. Each audit report includes recommendations for corrective action where shortcomings are discovered.

Cesareo described a section of the charter that outlines the audit process as “ambiguous in some ways” because at times the auditing firm must make judgments “when things are not exactly clear.”

The charter also allows bishops to respond that they are “doing minimally what the audit requires” when questions are raised, he said.

“There’s clearly a loophole,” he said.

“It points out that they (bishops) need to come up with a new instrument that is going to get at information that we’re currently not getting,” he added. “We need to go back to the charter and revisit it again to make it a less ambiguous document so there’s some clarity in terms of what must and must not be done in terms of compliance.”

StoneBridge Business Partners is the current company conducting the audits of dioceses and eparchies. The auditing firm based in Rochester, New York, has been doing them since 2011 and is under contract to conduct audits through 2019. The USCCB is seeking applications from firms to conduct the audit for the next three-year cycle beginning in 2020.

Cesareo, president of Assumption College in Worcester, Massachusetts, said he will outline the National Review Board’s concerns during a report at the bishops’ fall general assembly Nov. 12-14 in Baltimore.
Cesareo pointed to another ambiguity in the charter: the requirement for a diocesan review board to meet regularly.

“Well, what does that mean?” Cesareo asked. “In some dioceses that means only when there’s an allegation. That may not be for several years. And if the review board is not meeting, then the bishop is not getting the information he needs.”

Cesareo also would like to see the charter revised to include a requirement that all sex abuse allegations go before a diocesan review board.

“If the bishop himself or his gatekeeper can decide which allegations can go to the review board and which don’t, that’s another way that a bishop can protect a perpetrator priest,” he said.

Cesareo recommended making the charter more “prescriptive to include bishops” and called for revising the statement on episcopal commitment “with something that has teeth in it.”

The commitment statement, found at the end of the charter, includes a paragraph that obliges bishops and eparchs to “apply the requirements of the charter also to ourselves, respecting always church law as it applies to bishops.”

Cesareo told CNS that the audit concerns have been discussed jointly in meetings among three members of the review board and the bishops’ Committee for the Protection of Children and Young People. He said it was too early for recommendations to be presented to the bishops at their Baltimore assembly.

The assembly is an opportunity for the bishops to begin restoring trust among the faithful by taking steps to demonstrate that they are serious about addressing sex abuse within the church, whether cases are decades old or new, Cesareo said.

“We do have to recognize that there are many bishops who understand that change has to take place,” he said. “I think they will be a driving force not only next week in Baltimore but going forward.”