National School Walkout is time of prayer for many Catholic schools 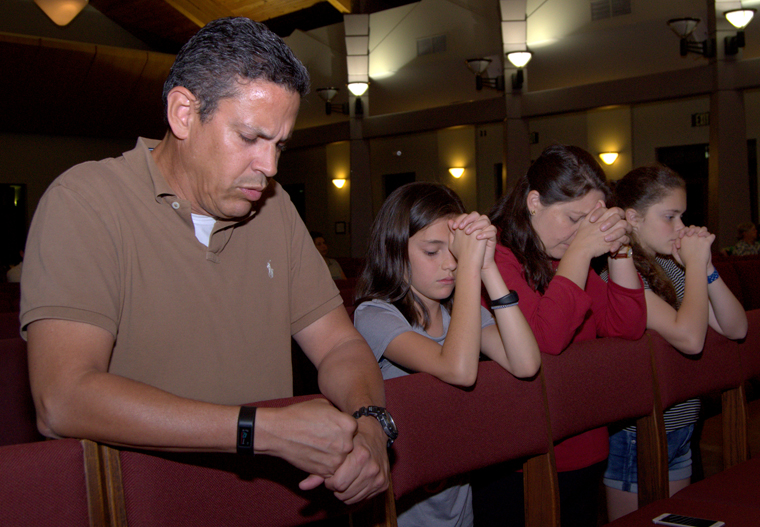 WASHINGTON (CNS) — March 14, exactly one month since the deadly school shooting in Parkland, Florida, students from around the country planned to walk out of their schools in protest of the nation’s gun laws for 17 minutes.

The time is meant to pay tribute to the 17 students and staff members killed that afternoon by gunfire at Marjory Stoneman Douglas High School.

The national movement, at 10 a.m. in all time zones in the U.S., was organized primarily by youths working with EMPOWER, the youth branch of the Women’s March, which organized marches for women’s rights in Washington and many other cities after President Donald Trump took office.

Another nationwide school walkout is scheduled for April 20, the 19th anniversary of the school shooting at Columbine High School in Littleton, Colorado. A related event is the “March for Our Lives” a youth-led demonstration March 24 in Washington, where 500,000 are expected to attend. Other demonstrations will take place in several U.S. cities to protest current gun laws.

The school walkouts are intended to make a statement and vary from simply walking out of school for the allotted time or attending an organized rally.

Most Catholic schools across the country did not sanction walkouts, but they planned to mark the somber anniversary of the deadly school shooting in Florida and also support youth-led advocacy of anti-gun violence in a different way — through prayer.

Instead of walkouts, some schools were hosting “pray-outs,” saying “rosaries for our lives” or attending school Masses to pray for recent shooting victims and their families and for an end to violence.

The focus is in “keeping with who we are as people of faith and a community of believers,” said Dominican Sister John Mary Fleming, executive director of the Secretariat of Catholic Education of the U.S. Conference of Catholic Bishops.

Sister John Mary, a member of the Dominicans’ St. Cecilia Congregation in Nashville, Tennessee, said Catholic schools that are providing alternative school walkout events are teaching their students to pray for a situation that needs a response and encouraging them to take action by writing to legislators about gun legislation.

She sent Catholic school superintendents an email March 5 acknowledging that “many dioceses have chosen to support student participation in this important dialogue and discussion through a clear presentation of Catholic social teaching and peaceful civic engagement.”

For many diocesan and private Catholic school leaders, balancing student advocacy and safety was a critical decision not made lightly.

The principal at St. Francis High School in Sacramento, California, wrote to parents in early March saying: “Like other schools and districts across the nation, we have been wrestling with the type of action we should take as a school community” to the walkout, recognizing that many students want to show solidarity and express their views but also noting there are “serious safety issues presented by students leaving campus in the middle of the school day.”

The decision, announced by Elias Mendoza, who is principal of the all-girls school, was to “provide students with an alternative avenue to express their viewpoints in a constructive and meaningful way, while remaining on campus.” The school planned a prayer service for peace and healing at 10 a.m. and said parents who wanted to allow their students to participate in a political rally that day would have to contact the school office.

The letter echoed what other Catholic school leaders have expressed: “At the end of the day, we know our focus is educating students and keeping them safe, not taking sides in politics or creating policy.

Additionally, our staff is aware that we’re tasked with the responsibility of maintaining political neutrality in our role as educators, regardless of our own political views.”

Diane Starkovich, superintendent of Catholic schools for the Atlanta Archdiocese, said students walking off campus “cannot occur” because of concern that administrators wouldn’t be able to keep students safe if they left the school property.

In an email to The Georgia Bulletin, the archdiocesan newspaper, she said local high school administrators were talking with students “to allow them opportunities for solidarity with other students across the country who share the same concerns regarding gun control and mental illness issues as well.”

On the day of the national walkout, students at some Catholic high schools in the Atlanta area will have the chance to exchange their uniforms for clothing with the school colors of the Parkland high school — maroon and silver – and funds donated for this will be set aside for the victims of the Florida shooting.

Archdiocesan high schools also are amending some courses as students have expressed concern for the Florida high school community and want to talk about gun laws. Theology classes, for example, will examine these shootings from the Catholic perspective, asking questions about injustice and violence in the world and how believers are to respond.

In Michigan, students from throughout the Detroit Archdiocese planned to hold prayerful gatherings to remember the Parkland shooting victims and also a mother and father fatally shot allegedly by their son March 2 at Central Michigan University in the neighboring Saginaw Diocese.

“The Archdiocese of Detroit adamantly detests gun violence of any kind, and I have encouraged our schools to discuss as a community, ways to prayerfully respond to these tragic events,” said Kevin Kijewski, superintendent of schools. “The result is a range of Catholic, faith-based responses to gun violence and a united appeal to the Lord for assistance during these difficult times.”

In the Archdiocese of New Orleans, all Catholic schools have been asked to have 17 minutes of prayer during the National School Walkout — beginning with a rosary, followed by an archdiocesan prayer against violence, murder and racism — a prayer that is said aloud by Catholics at every Mass in the archdiocese.

“We didn’t hear of any schools or students participating (in the walkout), but we were hearing from our school communities,’What could we do, what could we offer in support of lessening gun violence?'” said RaeNell Houston, the archdiocese’s superintendent of Catholic schools.

Houston told the Clarion Herald, New Orleans’ archdiocesan newspaper, that children deserve to be safe in our school communities and school officials felt that “intentional, dedicated prayer would yield more fruitful results than a walkout.”

“We believe this is a time to come together and work as a community of Catholic schools to help achieve a lasting peace,” said Jim Rigg, archdiocesan school superintendent, in a March 6 letter to school principals.

The Diocese of Harrisburg, Pennsylvania, planned school prayer services March 14 as a “positive way to respond to the concerns of students, for the safety of schools and to recognize the mourning of a country for so many lost,” a diocesan statement said.

Father Edward Quinlan, diocesan secretary for education, said the time of prayer should not just be focused on the effects of gun violence. “School violence takes many forms,” he said, “from the tragic assaults we saw in Florida to the day-to-day bullying and harassment of other students.”

For some Catholic schools, the alternative walkout day event was simple. St. Saviour High School in Brooklyn, New York, was having a prayer service in the school gym that would include reading the names aloud of those killed in the Florida school shooting. Chaminade College Preparatory High School in West Hills, California, was inviting students to participate in a 17-minute walk at lunch around the track as an opportunity to show unity “and honor the students and faculty who lost their lives.”

A week before the national school walkout, hundreds of students at St. Teresa’s Academy in Kansas City, Missouri, walked out of school in one of the first area school protests of gun laws joining the national discussion about gun legislation, the Kansas City Star reported.

These students will not be taking part in the March 14 walkout, nor did their school plan an alternative event, because they are currently on spring break.

Contributing to this report was Christine Bordelon in New Orleans and Andrew Nelson in Atlanta.