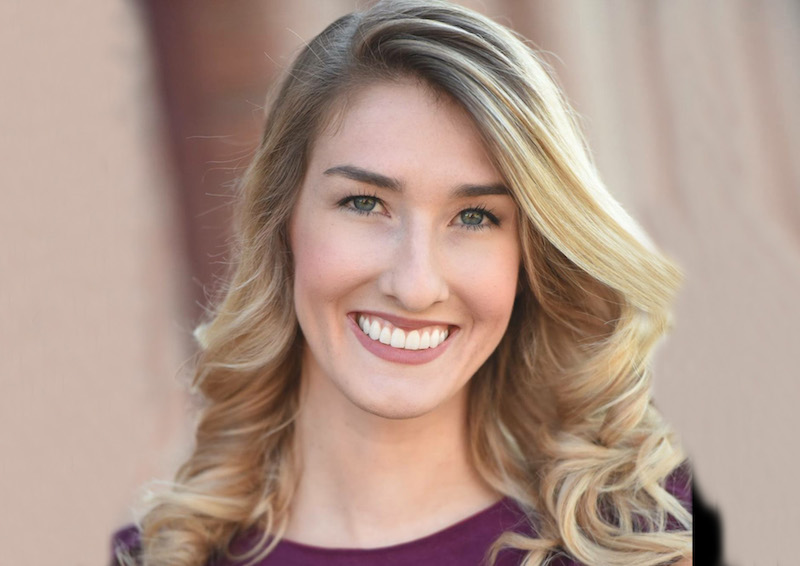 The gifted have some extra talents they can hold in reserve.

Danielle Mensing’s main role is director of annual giving for the diocesan HOPE Appeal. But she once thought of being an opera singer; she pivoted in favor of fighting for what is right in the world.

Hired by the HOPE Appeal three months ago, the soprano surprised the December Christmas party for diocesan employees by singing Cesar Franck’s “Panis Angelicus” and Franz Schubert’s “Ave Maria.” The crowd suddenly forgot all about the potato bar and the sliced turkey.

“It just kind of became a last-minute thing,” she added. “Those two songs I felt were Christmassy and I like to share with people. I like to bring joy to people, so that’s kind of how that happened.”

The HOPE Appeal brings joy to people by funding offerings such as hospital chaplaincies, Catholic school tuition assistance, Catholic Charities, the Catholic TV Mass for the Homebound, vocations, and the Catholic Sun.

“We are thrilled to have Danielle Mensing join us as the director of annual giving,” said Timothy J. Mahar, executive director of the Foundation of the Roman Catholic Diocese of Syracuse. “Danielle brings a wealth of experience, knowledge, and innovative ideas to the diocese. Danielle has a proven track record in fundraising. She was the development director at the Alzheimer Association’s CNY chapter. She also serves on the board of the Association of Fundraising Professionals, chairs the Ambassador Committee of CenterState CEO, and is involved with the Estate Planning Council.”

Creative collaboration drives Mensing, who was born in Raleigh, N.C., and moved to the Syracuse area when she was 11 or 12. She appeared in musicals at Fayetteville-Manlius High School and graduated in 2010.

She then studied vocal performance for a year at Onondaga Community College. But singing became a “side thing” while she earned a bachelor’s degree in communication and media, with a minor in psychology, at Nazareth College.

At Nazareth’s Institute for Civic Engagement, she took leadership roles. She also attended Clinton Global Initiative University (CGIU), where she said the participants receive funding toward their startups. “My project was involving older adults and how we could provide better services as we age in America,” she said. “That was based on caring for sick grandparents.”

She attended a three-day CGIU workshop on how to raise funds, plan events, and start up a nonprofit, and what it takes to get supporters.

Next, she worked for the Alzheimer’s Association, where she started as the events manager and quickly moved up to development director as she became very involved with the area’s business community. “My work out in the community has helped me foster relationships and engage donors in the causes that I work for,” she said.

Commitment Weekend for this year’s HOPE Appeal is May 18 and 19; the campaign closes Nov. 30.

Last year the HOPE Appeal raised $4.528 million. This year’s goal is $4.5 million, Mensing said, and the theme is “Gratitude”: “We want to thank our supporters, our parishioners for the many years of support and loyalty that they have given to the HOPE Appeal. And the essence of Christian stewardship is giving thanks to our generous and merciful God for the many gifts he’s given to each of us.”

“The 2019 HOPE Appeal will be very different from past years,” she added. “For one, everyone’s attention span is growing shorter and shorter. Therefore, the video’s going to be shorter and more impactful.”

The video will show how donor dollars greatly impact the HOPE Appeal’s ministries throughout the diocese.

“Second,” she said, “it’s really important to engage the next generation of supporters. In my short three months here I’ve been developing strategies to engage youth and young adults.”

“I’ll be implementing a new platform for donating online,” she explained. “This platform will empower donors to create their personal fundraising pages on our behalf, as well as create awareness of the HOPE Appeal and the impact it has on the community.”

Third, she said, “donors want to know that their money is being used effectively. And that there’s a high return on investment from their contribution. This year I want to make it very clear where donor dollars go.” 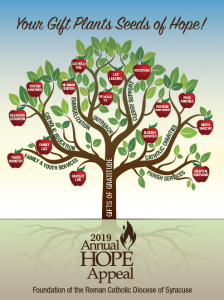 The poster for this year’s HOPE Appeal campaign features a “tree of life,” highlighting the fruits of donors’ gifts.

Therefore the poster will look different.

“My vision for that was the tree of life,” she said. “It’s a new beginning. People’s gifts feed the tree, and the branches are our programs, like Catholic Charities, evangelization. And then the fruit of those branches in the tree is hospital chaplains and refugee resettlement, vocations, and so on.”

Also, she will share the stories of individuals who benefit from HOPE Appeal ministries and programs. In 2018, she said, 33 hospital chaplains and pastoral ministers brought solace to more than 44,000 people in the most difficult of times.

Also in 2018, she said, the HOPE Appeal funded the participation of 13,802 children in faith-formation classes and 62,554 students in the eight Newman Centers that offer pastoral services at non-Catholic colleges.

Mensing shared a testimonial she received from a participant in Binghamton University’s Newman Center. James Zwilling, who graduated in 2018, told her this:

“Starting college can be a stressful and challenging time. The first time being away from home, far from familiar places, people, and experiences, can understandably leave a person feeling a longing for a community to belong to and people to call their friends. I know that it did for me. I consider myself to be extremely fortunate that I discovered the Newman House when I did. I first got involved in the Fall of 2014 as a freshman …, and I quickly realized that this community was exactly what I was looking for. I became fast friends with the other people there, people from a diverse selection of majors and backgrounds, all brought together seeking to grow in faith and zeal for Christ. I still count some of those people among my closest friends. I remained involved throughout my whole time at Binghamton, holding positions, running events, attending talks, going on retreats, praying, eating, and just loving life with a community of wonderful people. The Newman House was really a home for me, a place that no matter how I was feeling I could go and have a good time with people who cared about me and that I cared about.”

Mensing will be speaking in parishes to promote the 2019 HOPE Appeal. Also speaking will be recipients of services and people who are very active in their parish. For example, a young adult may speak about participation in Theology on Tap, which offers speakers, conversation, and food for people in their 20s and 30s.

Will the soprano who impressed the diocesan Christmas gathering be doing any more singing on the job?

“I’m sure if we need entertainment for some upcoming HOPE Appeal kickoff receptions,” she said with a laugh, “then I will definitely fill in for that if necessary. Music offers a touch of elegance during receptions for donors.”