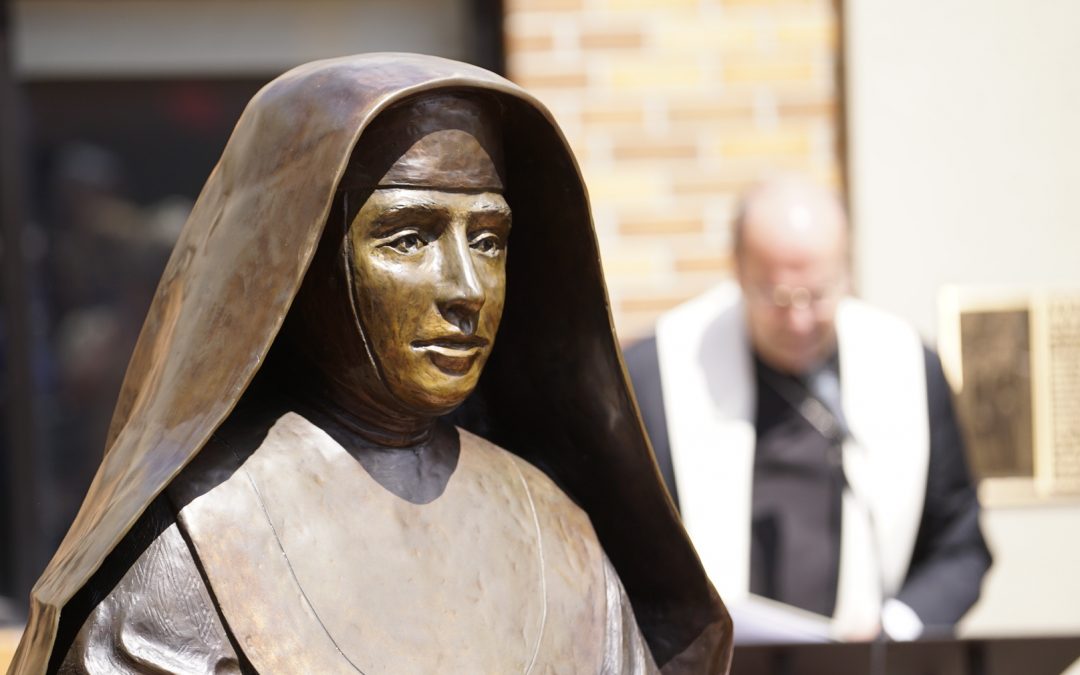 SYRACUSE — A new garden honoring the legacies of a local saint and a loving family was opened and dedicated on Syracuse’s North side June 6.

The Maurillo Family Garden, located alongside the Saint Marianne Cope Shrine & Museum at 601 North Townsend Street, now stands where the Maurillo family home once stood. The site is part of the campus of St. Joseph’s Health, the hospital St. Marianne and her fellow Franciscan sisters opened in 1869.

St. Marianne lived in and ministered throughout Central New York before moving to Hawaii in 1883 to care for patients with Hansen’s disease, which she did until her death in 1918. She was canonized in 2012. The shrine and museum dedicated to sharing her story opened at its current site in 2014.

“From the moment that we learned about St. Marianne’s ‘evergreen garden’ that she was never able to complete, we always hoped we’d be able to make one here for her in her honor,” museum Director Kristin Barrett-Anderson told the assembly gathered in the garden for the dedication. St. Marianne planted gardens everywhere she served, creating beautiful, sacred spaces for her sisters, the community, and her patients, she explained. “The ‘Evergreen Home’ was going to be a place where people could sit and rest, away from the concerns of daily life, away from illness, away from chaos, a place to contemplate and pray. This will be a place such as that — to appreciate the beauty of life and a way to carry on the legacy of St. Marianne Cope.”

“We’ve been fortunate over the last several months to become friends with the Maurillo family, a a group of people who also have a place and a legacy to carry on on this exact spot,” Barrett-Anderson continued. “It was [at] 601 North Townsend Street that their grandparents lived. They settled here, they did Sunday dinners here, they celebrated weddings, they gathered here after funerals. It was right here that grandma planted roses and hydrangea and posed for family photographs after celebrations. This garden is a legacy to this family, to Vitantonio and Rosaria, and to all those who have followed.” The garden was created thanks to a gift from the Maurillo family.

St. Joseph’s President and CEO Kathryn Ruscitto spoke of St. Marianne’s role in founding the hospital, which “had a unique character for its time — open to the caring for the sick, without distinction as to a person’s nationality, religion, or color. And we continue that mission today. It’s what makes us, I think, very special in this community. We are so thankful to have this memorial and sanctuary nearby and we’re looking forward to the positive impact we know the new garden will have for our patients, their families, and our staff.”

General Minister of the Sisters of St. Francis of the Neumann Communities Sister Roberta Smith, OSF, spoke of two qualities brought to mind by the garden: beauty and relationships. “That was what she [St. Marianne] brought to the suffering patients, not only here in Central New York, but on the isolated island of Molokai in Kalaupapa,” she said. In a place where people were exiled and isolated because of their disease, “somehow she had the quality and virtue of strength of character and courage to be able to bring beauty to Kalaupapa.”

“She also brought relationship,” Sister Roberta continued, “because it was an important piece to be part of something. When you were isolated and outcast, you were left alone. She did not see that as a value at all. She wanted to bring love to the lives of all these people that were suffering greatly.”

Sister Roberta urged the crowd to do likewise, to ask themselves how they can bring beauty and relationship into the lives of the people they meet.

Speaking on behalf of the Maurillo family, Susan Maurillo Prostor Sims noted that, “Unbeknowst to any of us, we grew up with the making of a saint right here in our own backyard.”

“This holy ground is rich in memory of those Maurillos who came before us, where as a family we played and prayed together,” she said. “As I am certain that you, St. Marianne, watch over your hospital and her patients, I humbly beseech that you watch over your garden and all who enter in seeking solace, hope, and healing. St. Marianne, from this day forward into future generations, on behalf of my family, we honor you and we pledge that this, your garden, will flourish and remain ever green and it will be to God’s glory.”

Members of the Maurillo family then unveiled the garden’s centerpiece: a large statue of St. Marianne. Bishop Robert J. Cunningham offered a prayer and blessing over the garden, its flowers and trees, brick walkways, and benches.

After the ceremony, Maurillo Prostor Sims reflected on how her family came to help create such a beautiful space honoring St. Marianne: “We said yes because she said yes.”