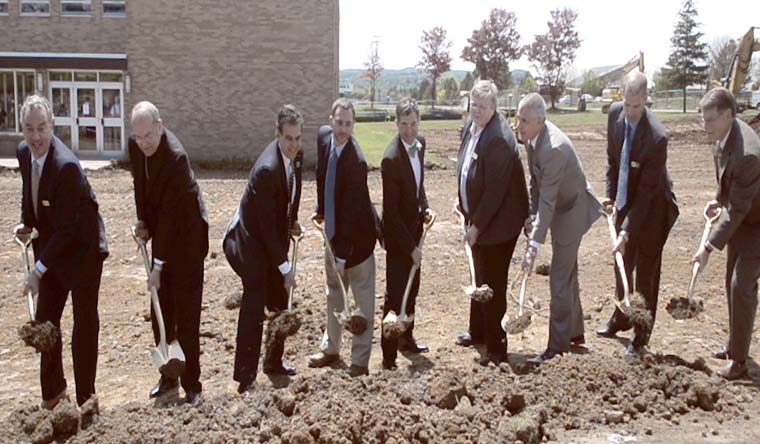 UTICA — Bishop Robert J. Cunningham blessed the site and the first shovel broke ground for Notre Dame Schools’ new Msgr. Francis J. Willenburg Center May 18. The building is named in memory of the beloved priest who was known throughout the Central New York community as a devoted fan for many area sports and schools, and as an advocate for young people.

Jim Joseph, Chairman of Notre Dame’s Board of Trustees, said, “Three years ago, we launched the multi-million dollar ‘Making our Kids World Ready’ capital campaign. We expressed our gratitude for the faith invested in us by the Diocese of Syracuse and the community. A short time later, when I spoke at the Class of 2013’s commencement, I looked the graduates in the eyes and told them that when they returned to Notre Dame for their fifth high school reunion as alumni, there would be a beautiful new building to welcome them. Today, we fulfill our promise to the students, alumni, Diocese and the community.”

Notre Dame Jr./Sr. High School Principal Sister Anna Mae Collins, CSJ, stated, “This is an exciting time for us, not only because we are beginning our first major capital project in half a century, but because it illustrates the trajectory of our growing enrollment and the value the local community places on faith-based education for our young people.”

Located on the east side of the existing junior/senior high school, the new 14,000-square-foot building will be a fully functional, independent space with lobby and a separate entrance. It will provide room for Notre Dame’s and the community’s growing performing arts and athletic programs. The school, founded in 1960, will now have a stage and an additional gymnasium featuring a regulation-size basketball court.

Bleachers will have a 100+-seat capacity and 200-300-person capacity for stage performances. A concessions area and warming kitchen, restrooms, locker/dressing rooms, and office space will also be included.

According to Peter C. Murad, principal architect with Architectural Resources of Buffalo, a facility assessment began seven years ago leading up to the development of the campus master plan. Murad said, “As a Notre Dame graduate, I am honored to have collaborated with the leadership of the school on the master planning and design of this iconic multipurpose theatre, music, and gymnasium facility. The dynamic structural full glazed facade serves as a beacon on campus and the architecture embodies the vision of educational excellence and creativity.”

Several partners in the project have their roots at Notre Dame. Murad, a specialist in the planning and design of educational facilities across New York State, is a 1980 graduate of the school. National Building & Restoration of Utica will serve as general contractor; Joe Salerno, owner, is a graduate from Notre Dame’s Class of 2000. Carson Sorrell, whose children graduated from Notre Dame, has accepted the position of clerk of the works.

Salerno said, “It is a great opportunity to have a team whose members are all personally committed to the project. We all have Notre Dame in our hearts and we’re all in this together,” he noted.

Salerno’s company has done building projects for many school systems, including some of the biggest projects in the area. He said they’ve taken on $20 million worth of construction over the last five years at local high schools alone. He said, “Notre Dame has a different feel to it. It’s not just another school. People don’t realize that, just like entire school districts have a sense of community, Notre Dame has a unique sense of community and there are generations of families that have gone through there.”