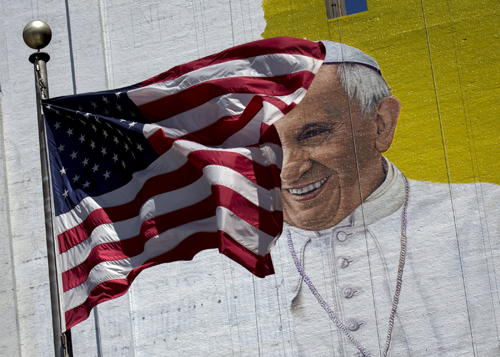 WASHINGTON (CNS) — The Sept. 23 meeting between President Barack Obama and Pope Francis will likely continue the dialogue these two leaders began in a 2014 meeting at the Vatican and will likely lead to further action on ideas the two leaders share, said White House officials in a telephone briefing with reporters Sept. 17.

“We see this as an opportunity to continue our engagement with Pope Francis and the Vatican, but also to receive the visit of a leader who is incredibly important to many Americans and many people around the world,” said Ben Rhodes, deputy national security adviser.

Rhodes said the two leaders are likely to discuss issues they share and maybe even some they disagree on. “When it comes to the policies of our administration and the priorities that the president sets, there are a whole host of issues where there is much common ground with the mission of the Vatican, and there have been issues where there have been differences as it relates to other issues. So that’s just the nature of this relationship.”

Another administration official pointed out that although many expect the pope to discuss preserving the environment, promoting development and supporting religious freedom, he may also surprise people by what he decides to discuss.

And even though there may be “some messages with which we may respectfully disagree or have differences,” the administration and the Vatican agree on “many of the big-ticket items,” such as climate change, fighting inequality and poverty, and reaching out to people in distress and people in need, said Charles Kupchan, White House senior director for European affairs.

He also said the president has urged members of his administration to make sure the visit with Pope Francis has “lasting value and is as meaningful as possible” by looking at ways to further the values and initiatives the White House and the Vatican share.

After the ceremony, the president and the pope will have a private meeting in the Oval Office, and White House officials said they expect there will be a separate meeting between Cardinal Pietro Parolin, Vatican secretary of state, and other Vatican officials and a group of senior officials from the president’s cabinet and the White House.

Biden will attend the Mass and canonization of Blessed Junipero Serra at the Basilica of the National Shrine of the Immaculate Conception Sept. 23 and the pope’s address to a joint meeting of Congress Sept. 24. He and his wife also will be on hand for the pope’s farewell ceremony at the Philadelphia International Airport Sept. 27.

When asked about the pope’s White House visit occurring on Yom Kippur, the Jewish Day of Atonement, Rhodes noted that members of the Jewish community would be able to participate in other parts of the pope’s visit. He also said the pope’s schedule was set in part by the date of the World Meeting of Families in Philadelphia and the U.N. session on Sustainable Development Goals.

Another White House official pointed out that Muslim, Hindu, Buddhist and representatives from other Christian faiths would be present during the state visit as well as those who are not connected with faith entities or leaders of religious organizations but have great regard for the pope and his message.

Rhodes noted that just as no one can fully predict what the pope will say to the president, no one knows exactly what he will say to Congress.

“I think we can deduce from his past remarks and travels what issues are important to him,” he said. He also noted that whether people agree or disagree with the pope he will “make people think.”

Concerned about their own behavior during the pope’s meeting with Congress, four U.S. representatives wrote a letter to House Speaker John Boehner, R-Ohio, and House Minority Leader Nancy Pelosi, D-California, asking for guidance on “the appropriate decorum, protocol and behavior” during the pope’s address.

The speech will be broadcast live on Jumbotron screens on the West Front of the Capitol where thousands of people will be gathered.

According to The Washington Post, security officials are planning for unprecedented security measures during the pope’s visit with the U.S Secret Service coordinating counterterrorism operations, crowd management, crisis response and air and vehicle traffic control. In Washington, the FBI, Capitol Police, Coast Guard, Pentagon and Federal Emergency Management Agency are closely involved in the planning, along with local police departments. Federal agencies in Washington have encouraged employees to work from home Sept. 22-24 to reduce traffic congestion.