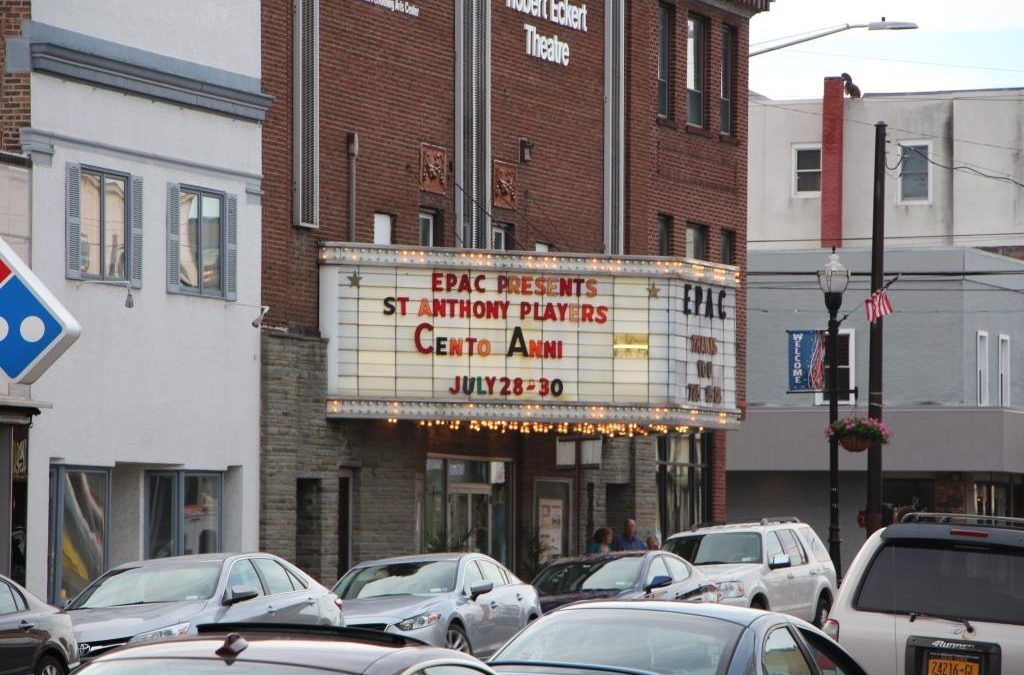 Vivian Virgilio, who sang that song at a show in Endicott this summer, says St. Anthony of Padua Parish is having a smashing year.

The culmination will be on Oct. 8, when Bishop Robert J. Cunningham officiates at a 3 p.m. Mass in honor of the church’s 100th anniversary. Former priests of the parish will be attending too, Virgilio said. “That Mass is the finale, so to speak,” she said.

In July, the St. Anthony Players put on a three-day show at the Endicott Performing Arts Center (EPAC), the community theater that, she said, “lights up Washington Avenue where it is.”

The show, “Cent’Anni” or “Cento Anni” (Italian for 100 years), featured original themes with a heavy Italian flavor — because of the roots of the parish — with famous songs sprinkled in.

The pastor, Father James Serowik, had an interesting role in the “Tony’s Place” scene.

Virgilio, who helped write the show, said: “We love Father Jim. … ‘I said, ‘Father, we’re thinking of making you a bartender.’

So of course one of the characters says, “You see that bartender over there? His mother always wanted him to be a priest.”

“They had a ball,” said Virgilio, who has performed in many St. Anthony Players shows over the decades. “And we had a big audience every night.”

Asked if she went to acting school, Virgilio said, “No, I had a slice of salami.” Her father owned a deli in Endicott, and her mother prepared excellent meals.

“Cent’Anni” Director Patrick Foti, who is also the executive director of EPAC, said he was baptized in St. Anthony’s, moved to another district with his parents, but then came back to it after getting married. “I just love all the parishioners and everything they stand for,” he said. “Very family oriented.”

Foti described the July show as “quite a variety of music and they tie it together with dialogue and jokes.” He said everybody who left the theater had nothing but good things to say.

“Funiculi Funicula” was performed hilariously, with ad libbing, said Mario Salati, a trustee of the parish along with Amy Roma: “They were so funny. … They forgot some words. … It was really well received this year.”

“We have a beautiful church,” Salati said. “It’s beautifully kept up. …  I think we’re an important part of our community. People definitely know about St. Anthony’s.”

It would appear impossible not to, given the parish’s century-long penchant for bringing people together.

Although the parish, which is newly linked with St. Joseph Church in Endicott, originally was mainly Italian, these days it has various ethnicities, including Russian and Polish, said Deacon Frank Longo.

He said: “To me it’s a melting pot. … It’s a good thing that’s happened. … I think it’s a tradition from our own moms and dads, that they’ve taught us how to be more welcoming … and that was automatic; that wasn’t something they said — this is the way [you’ve] got to be; they just lived it. They lived it and that’s become part of us.

“And I think that’s part of the reason we’re still here, we’re still together as a community. We keep on with the traditions.”

Deacon Longo’s sister Palma Longo has been a St. Anthony’s Parish trustee for 10 years. She has a picture of her mom, Antonette Longo, and friends in the basement of the old church building, cooking. “She was involved, I’m involved, I guess,” Palma said.

Retired from teaching English in Vestal, across the Susquehanna River, she helps with the parish’s food pantry and the Mass on the Grass. Additionally, she is a lector, a Eucharistic minister, and the head of the Bereavement Committee.

That committee takes great care to make people feel comfortable. A committee member meets with the family for a couple of hours to discuss topics including the readings and the music. The printed program for the funeral contains a depiction of the deceased person’s favorite saint on the back.

If the family wants to have a lunch after the funeral, the committee arranges for volunteers to make incredible meals for $7: pasta, sausage, peppers, string beans, roasted potatoes, soups, salad, rolls, and more. “Typical Italian meal,” Palma said.

She cherishes the parish’s involvement in the ChristLife evangelization series, as does Deacon William Matts, the parish’s business administrator. He and his wife, Debra, participate in ChristLife and also a Bible-study program.

Deacon Matts agreed with Deacon Longo’s assessment that St. Anthony’s is a “neighborhood kind of church” on Endicott’s north side.

As an example he cited the annual St. Anthony’s Italian Feast Days. “California and Colorado people have planned their vacations around it,” he said, and people routinely come from Syracuse and Scranton, too.

The church still does a Mass partially in Italian one Sunday a month. Several parishioners have experience teaching Italian, he said, including one who teaches at Binghamton University.

This summer, Deacon Matts said, the parish offered children in the community free ice cream on two nights, and parishioners also planned to offer free hot dogs in conjunction with a bottle and can drive to help a visiting nun raise money for an orphanage in Kenya.

The former Coombo’s Grocery across from St. Anthony’s Church now is home to Judy’s Café, named for a parishioner who died from cancer. Her brother, a contractor, converted the store for use by the parish.

All summer long, the parish’s women’s group offers different-themed food on Friday nights at Judy’s Café. The event is open to anybody, and local people come in and sing Italian songs.

Also helping the parish to maintain a presence in the community is the food pantry, which serves 300 to 400 people a month, Deacon Matts said.

Other successful ministries he cited are the preschool daycare program for 90 to  100 three-, four-, and five-year-olds and an afterschool program for 50 to 60 of the older kids. This year’s summer camp for 150 to 200 kids contributed the parish’s high standing in the community, he said.

Other pluses for the parish are Thanksgiving baskets and Christmas gifts for people in need.

“I think for a lot of people it’s home,” Deacon Matts said of St. Anthony’s. “Their grandparents and great-grandparents have been here since the beginning.”

After the Oct. 8 Mass officiated by the bishop, the parish will hold a dinner-dance at the McKinley reception venue in Endicott.

Virgilio, the irrepressible parishioner who knows deli meat and acting too, summarized: “Everything we do we get good audiences. … They know we do the best food.”