Out of many, one: Oswego parishes to form one community 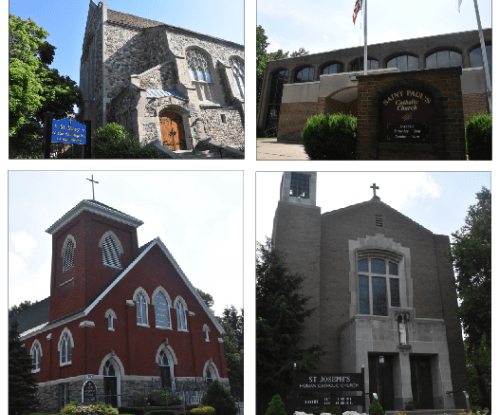 Four Catholic parishes in Oswego have begun a yearlong process to form one faith community that will worship on one church campus.

In announcements mailed to homes, provided in parishes, and made at Masses in mid-June, the pastoral leaders of St. Joseph, St. Stephen, St. Mary, and St. Paul said they would begin a process July 1 to “define the future of the Oswego Catholic Community.”

“In recent decades, much has changed in the landscape and texture of the Catholic Church in Oswego,” said Deacon Nick Alvaro of St. Joseph and St. Stephen; Father John Hogan of St. Mary; Father Guy Baccaro of St. Paul; and Msgr. James Lang, Vicar for Parishes, in one of the letters. “As we move forward in faith, our goal is to maintain a dynamic, healthy and vital Catholic community in Oswego. As parish communities we have observed and discussed our new situation and now is the time to move into the future.”

Pastoral planning in the diocese

The changes referred to have affected Catholic communities throughout the Northeast and all Catholic dioceses in the region are engaged in pastoral planning, Msgr. Lang told the Sun. Among those changes: an aging and declining population; economic and industry shifts; limited financial resources; aging facilities; fewer priests and religious available for ministry; and decreasing participation in Masses and the sacraments.

These factors and their future impact spurred initial pastoral planning work in the Diocese of Syracuse some 40 years ago. That work, along with renewed efforts under then-Bishop James M. Moynihan, ultimately led to diocesan-wide reconfiguration plans announced in 2007. Bishop Robert J. Cunningham, with further information from parishes, pastoral leaders, and diocesan leaders, reaffirmed and modified as necessary those plans in 2014.

Pastoral care areas (PCAs) — groups of collaborating parishes — were established throughout the diocese as a result of planning efforts. The goal of all PCAs is to “work together to achieve the highest quality of pastoral programs, mutual clergy/staff support, economies of scale, and to engage [in] the work of local pastoral planning,” according to materials from the Office of Pastoral Planning.

Currently, “the primary conversation [about the process of creating one parish] is with St. Paul’s, St. Mary’s, St. Joseph’s and St. Stephen’s. The conversation with St. Peter’s and Sacred Heart Mission is also beginning,” according to Msgr. Lang.

Statistics provided in one of the parishes’ letters offer a snapshot of the changes in Oswego’s Catholic community: Registered parishioners in 1910 numbered 12,772; a calculation of Mass attendees in October 2017 totaled 1,107. The number of baptisms, First Communions, confirmations, weddings, funerals, and students in religious education programs have also declined markedly over the past 30 years.

Father Hogan is an Oswego native and has served as a pastor in his hometown since 2011. He has witnessed these changes take place as industries have relocated and the population has grayed and declined. People and resources are now stretched thin and the parishes are vying for time, talent, and treasure, he explained.

Further, according to Msgr. Lang, there are currently 91 active diocesan priests available for assignment in the diocese’s 121 parishes and other ministries; 30 of those priests are 70 years of age or older.

These data informed a meeting between Oswego parish leaders and trustees in January. Subsequent regular meetings, which have included the parishes’ lay trustees, pastoral council members, and finance committee members, produced a plan of action to form a “dynamic, healthy, vital Catholic community.” As outlined in the letters, that plan includes the following items:

• A steering committee, composed of the parishes’ lay trustees, Father Baccaro, Father Hogan, and Deacon Alvaro, will guide the community’s work and focus on administration, communication, site selection, and structure.

• The Evangelization and Community Building committee will focus on “enhancing this community of disciples” as well as ecumenical and community outreach.

•  The Parish Facilities and Real Estate committee members will engage with professionals to evaluate all parish properties, recommend a site for the community, and explore future uses of the other properties.

• By July 1, 2019, one parish campus will serve the Oswego Catholic Community.

Parish leaders stressed that the process has only just begun and no decisions about the site of the future parish campus have been made. They also explained that the pastor of the future community is yet to be determined, as with the creation of the new parish all active priests of the diocese will be able to apply to serve as its pastor. A final key to the process: Recommendations made by the committees will ultimately be presented to the bishop for his “prayer, discernment, and action,” the letter notes.

The announced plans have drawn a variety of responses from parishioners. Parish leaders spoke of shock expressed at the Mass attendance figures, sadness at the prospect of closing a beloved church building, anxiety about the future of the faith community in general. At the same time, they have heard understanding of the reality of the situation, determination to move forward, and excitement about future possibilities.

Deacon Alvaro noted the history and proud heritage at the heart of every parish and the ancestors who sacrificed so much to create these faith communities. “The best way that we can go forward from here to honor them is to continue to pass on the faith,” he said.

As a first step together, the faith community is working to select a patron. A list of potential patrons — Christ the Good Shepherd, the Holy Apostles, the Holy Spirit, and St. Marianne Cope — was offered to the community. After two rounds of polling, Christ the Good Shepherd and the Holy Spirit have come in neck and neck; members of the steering committee are now praying and discerning which name they will mutually present to Bishop Cunningham. Once approved, each of the four parishes will be known as “the Catholic Community of [Patron] at [Name of Parish Church].” The church campus to be selected for the faith community will also bear the patron’s name.

Though the road ahead will have its challenges, Father Baccaro, who also serves as the region’s vicar, sees opportunity for the community.

“I believe this presents us with an opportunity to be able to work with [the people] for growth,” he said. “Rather than bemoan the situation that we’re in and somehow pull back, we can band together and look at how we can work together for the future, for evangelization, for catechesis, for growth. Separately we couldn’t do it. Together we can.”

Editor’s note: The Sun will provide ongoing coverage of this process and the faithful moving it forward. Tell us what you’d like to know more about — send us an email at news@thecatholicsun.com.