Overtime, overhauls and the ordinary: 2013 goes down in Vatican history 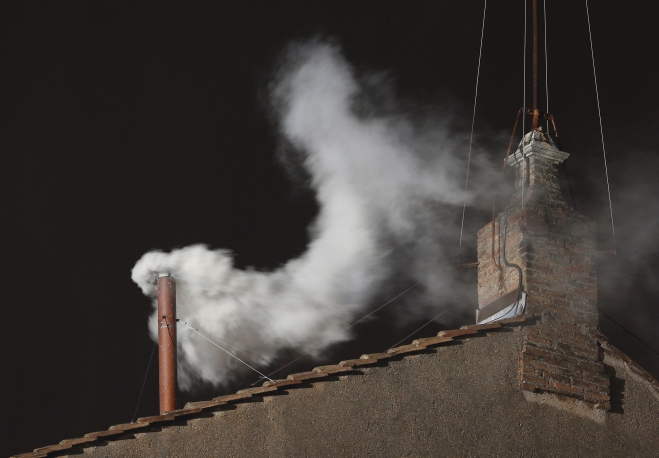 VATICAN CITY (CNS) — When the Vatican publishes its annual report detailing its activities and operations, the 1,400-page volume is filled with references to the every day and the exceptional.
Each Vatican congregation, council, office and organization creates a summary of its ongoing projects, original publications, new equipment and technology, and major renovations in the “Attivita della Santa Sede” (“The Activity of the Holy See”).

But whatever seemed like a big deal other years — gardeners getting a new wood chipper, Renaissance chapel frescoes being restored — in 2013, all of that paled in comparison to Pope Benedict XVI surprisingly announcing his resignation and the world’s cardinals coming to Rome to elect a new pope. The normal workload inside the Vatican suddenly was thrust into overdrive and the 2013 yearbook, released early in 2015, provides plenty of details.

The first part of the hefty tome is devoted to a day-by-day summary of everything the pope did.

For 2013, things start off routinely enough with Pope Benedict celebrating Mass Jan. 1 marking the feast of Mary, Mother of God.

Reading like a court reporter’s notes, the entry for Feb. 11 says the pope held an ordinary public consistory at 11 a.m. concerning the canonization of new saints. After listing the soon-to-be saints, the book unceremoniously adds — untranslated — the Latin words the pope unexpectedly delivered, announcing his resignation.

The volume outlines the full slate of meetings and audiences for the rest of the month, and ends with Pope Benedict taking a helicopter “a little after 5 p.m.” to the papal villa in Castel Gandolfo, where he then greeted the faithful gathered in the square below “at 5:38 p.m.”

The rest of the daily logs give an account of the “sede vacante,” facts about the conclave, precise times smoke curled from the Sistine Chapel chimney, and then a synthesis of what happened for the next 10 months with Pope Francis’ pontificate.

Because the last half of the volume compiles reports written by each individual Vatican office or entity, the writing styles begin to vary: ranging from more of the same, “Just the facts, ma’am” tones to an exuberance more in line with a proud son’s letter to his mom, listing latest accomplishments, exciting plans and daily routines.

The Pontifical Swiss Guard said its men took “courses in personal defense and emergency first-aid assistance as well as Italian. Our shooting instructors took additional courses, in collaboration with the Swiss Army.”

But besides their new database and starting the test phase of a new digital surveillance system, nothing stood out like learning about Pope Benedict’s resignation “the same way the rest of the world” did. “Immediately the entire corps began preparing to tackle the ‘sede vacante’ period and conclave,” said the report.

Providing the ceremony and security needed to greet and guard the world’s cardinals was lived “with great intensity” and the Swiss Guard report said they succeeded in letting the cardinals meet “without any hitches or bungles.”

Discovering Pope Francis intended to live in the Vatican guesthouse he used during the conclave and not the apostolic palace marked another “important change,” requiring a 24-hour guard posting outside his room and in the lobby.

“2013 was a year chock full of new developments,” the Vatican gendarmes stated in their report’s introduction.

They give a blow-by-blow account of their unexpected new role in protecting a retired pope and a new pope who kept breaking protocol: returning to the Vatican guesthouse by minibus; heading to St. Mary Major to pray; paying his bill at the religious residence where he stayed before the conclave; and heading out to a Rome clinic to visit a sick cardinal.

“On all these occasions, he was accompanied, as is the praxis, by personnel of the gendarme corps, which takes care of his security,” their report said.

But on top of keeping two popes safe, the security corps also had to protect visiting VIPs and heads of state delegations; maintain order and check credentials of 6,000 journalists and guard all the temporary media and broadcasting posts dotted around outside Vatican City.

They dealt with hundreds of thousands of pilgrims who also descended on the Vatican and all was done “with order, interest and thoughtfulness,” their 23-page report said.

Special “discreet and confidential technical operations” also were required, including security sweeps for hidden microphones, cameras and transmitters in the Sistine Chapel and the cardinals’ rooms before and during the conclave, it added.

The Vatican press hall said in its report, “It really wouldn’t be an exaggeration to define 2013 as a historic year for the church and the press office found itself experiencing it on the front lines.”

Just three weeks before the start of the biggest news event of the year — the period kicked off with Pope Benedict announcing his resignation — the press hall had just added accrediting visual media reporters to its numerous responsibilities, which already included accreditation for print media.

More than 5,000 people from more than 1,000 news agencies in more than 65 nations requested temporary accreditation, meaning the press hall suddenly had to serve close to 6,000 media personnel between Feb. 11 and April 1, it said.

The press hall extended closing time an extra hour — until 4 p.m. — and stayed open until “late afternoon” on a few key news days.

However, a separate, larger media center with 320 workstations had been set up in record time with longer hours, registering its peak usage on “March 13, with the white smoke, when there were 2,200 entrances registered in 16 hours.”

The Vatican fire department proudly reported their services were needed during the papal transition: They set up the metal chimney on the roof of Sistine Chapel; they patrolled the top of the colonnade where hundreds of journalists and lights were set up; and they were at the ready, extinguishers on hand, during the conclave, presumably in case any ballot burning went awry.