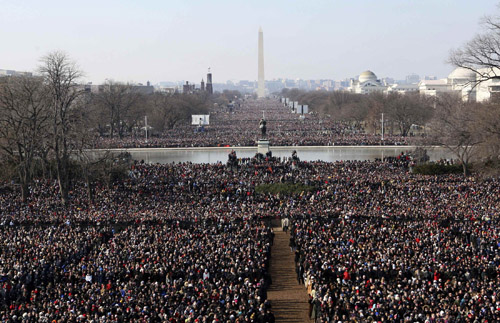 WASHINGTON (CNS) — Pope Francis will travel along a parade route between the Ellipse and a portion of the National Mall in the popemobile Sept. 23 in Washington after he meets with President Barack Obama at the White House.

The viewing area of the open motorcade route will be free and open to the public. It is the only event in Washington that will not require a ticket, but spectators will have to pass through security.

The Archdiocese of Washington announced the parade Sept. 10.

Pope Francis arrives Sept. 22 on a flight from Cuba to Andrews Field at Joint Base Andrews just outside Washington. There will be no public events that day.

On Sept. 23, Pope Francis will begin his day with a welcoming ceremony at the White House followed by the private meeting with Obama. Afterward, the papal parade will begin at 10:30 a.m. or 11 a.m. (Eastern time), leaving from the Ellipse, which is south of the White House, and going to the Mall.

Security gates will open for the Ellipse and the National Mall at 4 a.m. that morning and will close at 10 a.m., according to the archdiocesan announcement.

No one will be admitted into the area after that point in time. No food or drink may be brought in from the outside, but concessions will be available for purchase. Once inside the perimeter, attendees will not be allowed to leave and re-enter until the popemobile tour is complete.

Pope Francis’ schedule for the day includes a midday prayer with the U.S. bishops at St. Matthew Cathedral and a canonization Mass he will celebrate for Blessed Junipero Serra on the east portico of the Basilica of the National Shrine of the Immaculate Conception. Mass-goers will gather on the adjoining campus of The Catholic University of America.

The archdiocese said people are invited to gather on the grounds of the Washington Monument to watch live coverage of Pope Francis’ day on a large video screen. Between the cathedral event with the bishops and the canonization Mass, expected to begin around 4:15 p.m., a pre-Mass program will be aired on the large screen.

Participants who watch the live coverage will be permitted to bring in signage, food and drinks into the area, provided they are in compliance with guidelines set by the National Park Service. A full list of restricted items is available at www.walkwithfrancis.org/visit.

On the morning of Sept. 24, Pope Francis will address a joint meeting of Congress, becoming the first pontiff in history to do so. Inside, members of the House and Senate — each with one guest — will gather for the address. Outside, people will gather on the West Front of the Capitol to watch a live broadcast of the pope’s remarks. Tickets for the viewing are being distributed by members of Congress to their constituents.

When House Speaker John Boehner, R-Ohio, announced in July the pope would address Congress, he also said the pontiff “expressed an interest in making a brief appearance on the West Front.”

Next the pope will visit St. Patrick Church in downtown Washington and meet with clients of the archdiocesan Catholic Charities agency. He will offer a blessing and make remarks to those gathered for lunch at the St. Maria Meals Program outside the agency’s headquarters.

At 4 p.m. that day, he leaves Washington for New York City.