Parents of missing Mexican students travel to U.S. to appeal to pope 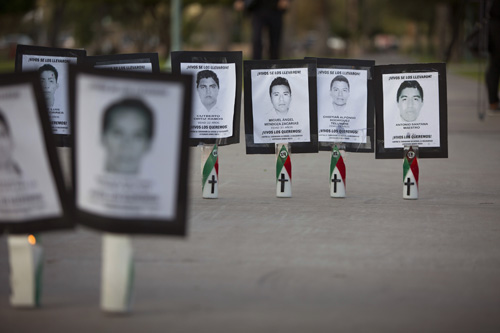 MEXICO CITY (CNS) — Peasant farmer Emiliano Navarrete lost his son one year ago, in an attack on 43 teacher trainees in southern Guerrero state. He still holds out hope that his son, Jose Angel Navarrete, 18, and his classmates are alive, even though Mexican investigators insist the 43 young men were kidnapped and killed by police acting in cahoots with criminals, while their bodies were burned in a landfill.

“There were never searches done as they should have been done,” said Navarrete, secretary-general of a parents’ support group, echoing one of the reasons the families continue protesting. “The government didn’t seem to care.”

Parents and classmates of the missing students have expressed dissatisfaction with the official investigation and what they say is indifference and incompetence on the part of police, public officials and politicians. They’ve taken their cause abroad as protests in Mexico peter out and the Mexican government tries to turn the page on a crime that sullied the country’s international image and sent the president’s popularity plummeting.

Now they’re seeking intervention from an especially influential source: Pope Francis, whose Sept. 26-27 trip to Philadelphia coincides with the anniversary of the attacks, which left six students and bystanders dead and 43 more missing.

“Our sons are innocent victims,” Navarrete said. “Perhaps [the pope] could do something for us … could help us pressure the Mexican government.”

The crimes committed in the city of Iguala, 120 miles south of Mexico City, caused national and international outrage and exposed the extremity of problems such as violence, corruption and the collusion between organized crime and politicians. In the months after the attacks, dozens of other clandestine graves were uncovered, while families of the missing — fearful at first of reporting their cases to authorities they considered in the same category as the criminal groups — started renewed searches for their loved ones.

The official investigation — called, “The historic truth,” by the then-Attorney General Jesus Murillo Karam in January 2015 — has been called into question. On Sept. 6, international investigators released a report that found faults with key components, such as an insistence that the students’ bodies were burned in a landfill.

“This is a national wound that has to be attended to and cured, because the country cannot be reconstructed without truth and justice,” the four bishops of Guerrero state wrote in a letter released Sept. 9, three days after the international investigators from the Inter-American Commission on Human Rights presented their report.

“The deficiencies that have been indicated in this [international] investigation seem to repeat themselves in other cases, like the 25,000 disappeared persons that there are in the country and that are still waiting to be solved, as a condition for justice and the reparation of damage,” continued the letter, signed by Archbishop Carlos Garfias Merlos of Acapulco, Bishop Salvador Rangel Mendoza of Chilpancingo-Chilapa, Bishop Dagoberto Sosa Arriaga of Tlapa and Bishop Maximino Martinez Miranda of Ciudad Altamirano. “The truth of this case is fundamental for advancing toward reconciliation and progress and peace.”

The deficiencies have the families seeking outside intervention. A group of five mothers will travel to Philadelphia for the World Meeting of Families and have requested a meeting with Pope Francis.

“The object of this trip is to inform the pope and people of good conscience in the world of the human rights crisis and loss of creditability of the Mexican government in the face of the preliminary report from the [international] experts,” read a Sept. 14 letter to the Archdiocese of Philadelphia from Navarrete and a coalition of Mexican and immigrant groups known as Ayotzinapa Acude al Papa. Ayotzinapa refers to the school’s location, 75 miles north of Acapulco.

No confirmation of an encounter with the pope has been given. A spokesman for the Mexican bishops’ conference was unaware of any contact between the parents and papal representatives. Catholic News Service queried the Archdiocese of Philadelphia by email but had received no reply by Sept. 21.

Five mothers of students were scheduled to meet with members of Congress in Washington Sept. 22.

Parents and classmates of the students have prayed at a homemade shrine to St. James, traveled to the Basilica of Our Lady of Guadalupe and celebrated Mass at the Ayotzinapa normal school with Archbishop Christophe Pierre, apostolic nuncio to Mexico. But Navarrete says the relationship between priests and the parents are not especially close — with the families running off activist priest Father Alejandro Solalinde after he made public comments on the students being burned alive.

Mexican officials later said the students were killed, then burned in a landfill during an all-night inferno. The international investigators said such a fire was impossible to build, while other problems such as suspects alleging torture were made.

“In more than 600 pages, the [international investigators] exhibited the principal ills of the justice system: the spreading of corruption and impunity like cancer,” said a Sept. 13 editorial in the Archdiocese of Mexico publication Desde la Fe. “This should serve as a motive for purging an ineffective and corrupt judicial system that has become an international embarrassment.”

The case of the missing students has caused a crisis of confidence in Mexico’s public institutions. An August poll in the newspaper Reform on trust in institutions showed the Catholic Church ranking as the country’s most trustworthy institution — a product of confidence in other entities such as the army, police and government declining.

“This is nothing to celebrate,” said Father Hugo Valdemar Romero, spokesman for the Archdiocese of Mexico.

Families of the missing students promise to continue the search for their children — even though authorities say DNA evidence from the landfill fire shows two of the students are dead.

“This has sent my life on a detour,” Navarrete said. I don’t feel anything, not resignation, nothing but anger. There’s enormous anger toward this government.”