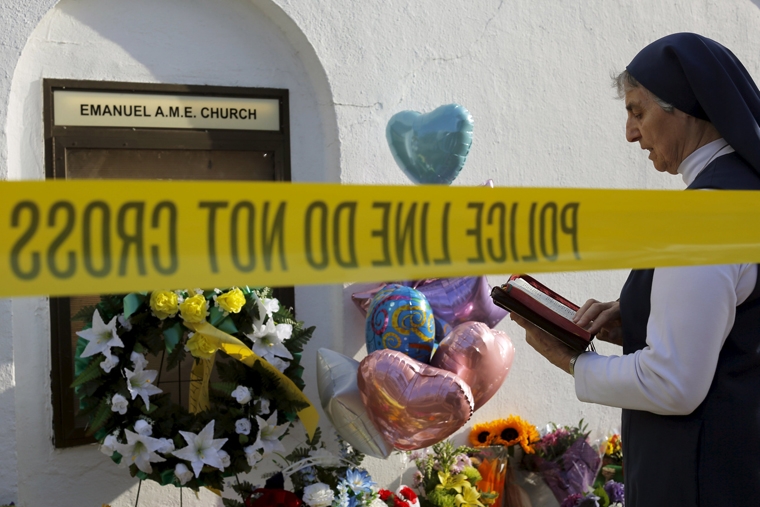 WASHINGTON (CNS) — The tragic taking of nine lives at a historically black church in downtown Charleston, South Carolina, brought an outpouring of solidarity, compassion and sorrow from around the country.

After an all-night search, police June 18 captured a white man who had joined a prayer meeting the previous evening inside at the Emanuel African Methodist Episcopal Church and then fatally shot nine people, including a senior pastor.

Religious leaders as well as government leaders issued their condolences and condemned the shooting, which is being investigated as a hate crime.

“The inside of any church is a sanctuary,” he said in a statement. “When a person enters, he or she has the right to worship, pray and learn in a safe and secure environment. For anyone to murder nine individuals is upsetting, but to kill them inside of a church during a Bible study class is devastating to any faith community.”

Bishop Guglielmone also shared his sympathies with those who lost loved ones in the shooting and prayed they will “feel the comforting presence of our Lord surrounding them during this difficult time.”

Bishop Michael F. Burbidge of Raleigh in the neighboring state of North Carolina, said: “In solidarity with my brother bishop … I ask all the Catholic faithful and people of goodwill in the Diocese of Raleigh to stop at some point today, and offer sincere and thoughtful prayer for the nine victims of this horrific crime and for their families.”

A number of Jewish groups issued strong statements on the crime that took place in Charleston.

“Hate crimes attack both individual victims and entire communities,” said the Jewish Council for Public Affairs. “They are meant to isolate and terrorize. We stand in direct contrast: for an inclusive and pluralistic community, one that cherishes life and recognizes that every person is created in the divine image.”

The statement went on to point out that tragic act “highlights that there is still racism in our society and that there is urgent need to address the issue directly. We must clearly and unequivocally demonstrate that hate violence has no place in our society.”

Rabbi Noam Marans, director of interreligious and intergroup relations at AJC Global Jewish Advocacy, said that “this horrific massacre of innocents at prayer is extreme depravity. We are shocked beyond words that someone could enter a house of worship in our country and commit such a horrific crime, all the more so if it was racially motivated.”

Numerous government officials weighed in on the shooting, with some citing an attachment to Emanuel African Methodist Episcopal Church. Closely impacted by the tragedy was Charleston Mayor Joseph Riley.

According to AP coverage of a news conference, Riley, who is Catholic, said that for someone to go into a church and kill people who had gathered to pray and worship “is beyond any comprehension. We are going to put our arms around that church and that church family.”

“He was a good man, a man of faith, a man of service who carried forward Mother Emanuel’s legacy as a sacred place promoting freedom, equality, and justice for all,” the statement said, using a popular name for the church. “We pray for him and his sister as we do for the seven other innocent souls who entered that storied church for their weekly Bible study seeking nothing more than humble guidance for the full lives ahead of them.”

They expressed support for Riley’s remarks, saying that as he made clear “all of Charleston’s heart bleeds today — but the overwhelming display of unity will bring forth the city’s healing. We will never forget those innocent souls who lost their lives. We will be there with all the strength and support and prayers we can offer to the families who now grieve.”

President Barack Obama in a statement said that he and first lady Michelle Obama know several members from Mother Emanuel church, including the pastor.

“There is something particularly heartbreaking about the death happening in a place in which we seek solace and we seek peace, in a place of worship,” he said.

“Mother Emanuel is, in fact, more than a church,” Obama continued, noting the church’s long and proud history. “This is a place of worship that was founded by African-Americans seeking liberty. This is a church that was burned to the ground because its worshippers worked to end slavery.”

“When there were laws banning all-black church gatherings, they conducted services in secret,” he said. “When there was a nonviolent movement to bring our country closer in line with our highest ideals, some of our brightest leaders spoke and led marches from this church’s steps.”

He said the kind of shootings that took place at the Charleston church don’t happen as often in other advanced countries and blamed the politics of gun control for keeping the U.S. from addressing the issue, but said such the country has to come to terms with such incidents.

“With our prayers and our love, and the buoyancy of hope,” he said, Mother Emanuel will be able to come back from this tragedy “as a place of peace.”