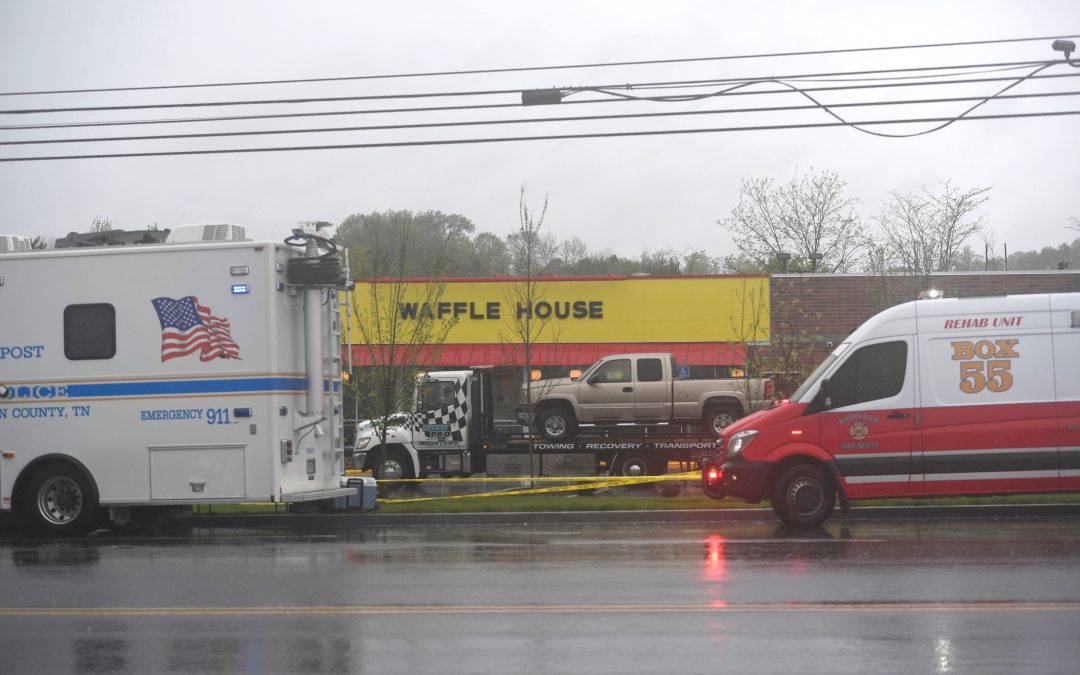 The victims were: Akilah Dasilva, 23; DeEbony Groves, 21; Joe Perez, 20; Taurean C. Sanderlin, 29; remembered as a talented musician, a brilliant student, a loving son, and a dedicated worker. Four others were wounded.

James Shaw Jr., the hero who disarmed the shooter of his AR-15 rifle, likely prevented even more people from being hurt or killed.

“We pray for those killed and injured in the horrific and senseless shooting at the Waffle House in Antioch on Sunday morning. May God embrace them in his mercy and may their families and friends find consolation and healing in his boundless love,” Diocese of Nashville Bishop J. Mark Spalding said in a statement.

“We pray also in grateful thanksgiving for the people of light who showed themselves in moments of darkness. The first responders and medical personnel who aided the victims, the police and law enforcement officials that responded to protect the community, and the individuals who reacted to the emergency are examples of good acting in the face of evil.

“Finally, we pray for the community and our nation to bring about sensible solutions for such acts of violence that we may live in peace,” Bishop Spalding said.

St. Ignatius of Antioch Church, the closest parish in the diocese to the scene of the crime, have been praying for the victims. Parish representatives said none of the victims were parishioners or had a known connection to the church.

The shooting occurred before dawn April 22, and a manhunt of the area concluded Monday afternoon, April 23, around 1 p.m. when the suspect, Travis Reinking, was captured and arrested by members of the Metro Nashville Police Department.

The shooting has once again sparked calls for — and resistance to — stricter gun control laws in Tennessee and nationwide. In a news conference April 22, Nashville Mayor David Briley called for comprehensive gun reform, declaring: “enough is enough.”

“If we can all just come together for the greater good, we can take these weapons of war off the streets of our country,” Briley said.

Reinking, who had recently moved to Tennessee from Illinois, had, for months, shown signs of significant instability, according to Don Aaron, a spokesman for the Nashville Police Department.

According to multiple news reports, Reinking believed that the musician Taylor Swift was stalking him, and he had been arrested by Secret Service agents last summer for crossing a security barrier at the White House, referring to himself as “a sovereign citizen,” and claiming he had a right to speak with the president.

After an investigation by the FBI office in Springfield, Illinois, state and local officials confiscated Reinking’s guns and revoked his firearm license.

According to local news reports, Susan Niland, a spokeswoman with the Tennessee Bureau of Investigation, said even though Reinking was forbidden from having guns in Illinois, it didn’t mean he couldn’t have them in Tennessee.

Illinois county deputies allowed Reinking’s father to take possession of the weapons on the promise that he would not return them to his son. However, according to Aaron, the Nashville police spokesman, the father, “has now acknowledged giving them back to his son.”

“It does not appear that there is anything in his record that would have been deniable from our end,” Niland said.

The day after the Waffle House shooting, a trio of Democratic state senators sought to revive a bill that would close some of the state’s gun buying loopholes.

“We don’t think that doing nothing is an option, and there are areas where all of us can and should easily agree change can be made,” said Sen. Jeff Yarbro, a Democrat from Nashville.

The new language added to the bill would make it unlawful to buy a gun or possess one for anyone who has been subject to suspension, revocation or confiscation of guns in Tennessee or other states.

Since legislators are trying to wrap up the 2018 session this week, Murphy was doubtful if the bill would make its way through the arduous process to get passed in just a few days.

“With the dynamics of what’s going on here, there’s an awful lot, and the clock is ticking,” she said.

Laurence is a staff writer for the Tennessee Register, diocesan newspaper of Nashville.