Poll: Pope’s favorability numbers down, and worse for handling of abuse 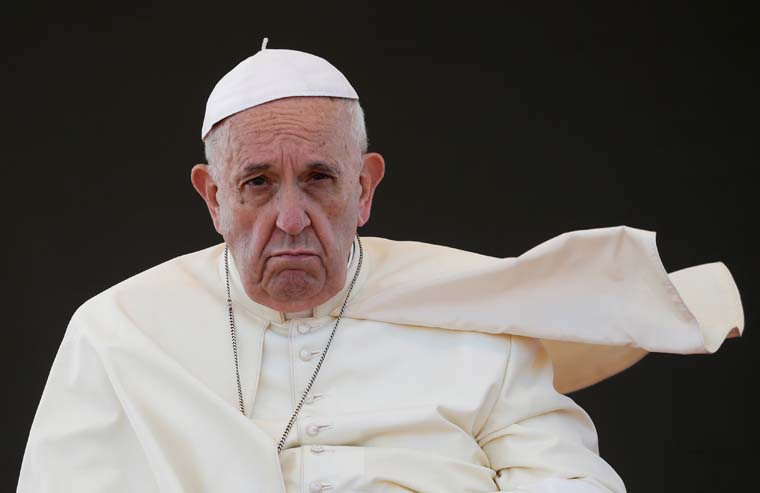 WASHINGTON (CNS) — With Pope Francis midway into the sixth year of his pontificate, the percentage of U.S. Catholics who view him favorably, while still strong, is noticeably down.

And, compared to a January poll by the Pew Research Center that showed Catholics being evenly split on how well Pope Francis has handled the issue of clergy sex abuse, numbers in the new poll, released Oct. 2, show that twice as many Catholics feel he is doing only a fair or poor job on the issue than say he is doing a good or excellent job.

The overall favorability number for the pope is 72 percent, split between 42 percent of Catholics who see him “mostly favorable” and 30 percent who view him “very favorable.” The latter number down a third from the last Pew poll last January, when Pope Francis had been at 84 percent favorability. The 72 percent figure is lower than Pew’s favorability findings for Pope Benedict XVI except for its first poll asking the question shortly after Pope Benedict assumed the papacy in 2005.

Pope Francis’ lowest favorability numbers are among Catholic men, at 66 percent, and Catholic Republicans or those who lean Republican, at 61 percent. They are highest among Catholic Democrats or those who lean Democratic, at 83 percent, and Catholic women, at 77 percent. The percentage of Catholics overall who view him unfavorably, though, more than doubled, from 9 percent to 20 percent.

“The new study also shows that U.S. Catholics’ views of Pope Francis are increasingly polarized along political lines,” said the Pew report on its poll. “For instance, in 2014, there was virtually no difference in views of Pope Francis” between Democrats and Republicans, with the latter giving him a 90 percent favorable rating and Democrats giving him an 87 percent mark.

Sixty-two percent of Catholics believe Pope Francis is doing only a fair or poor job handling the abuse crisis, compared to 46 percent in January. Those who believe he is doing an excellent or good job shrunk from 45 percent in January to 31 percent in September.

The drop is most pronounced among men and Catholics ages 18-49, with both groups registering under 30 percent in the latest poll who say he is doing a good or excellent job, although the numbers among those who attend Mass at least weekly nosedived from 71 percent to 34 percent.

In terms of standing up for traditional morals, 56 percent said the pope was doing an excellent or good job, down from 81 percent in the first Pew poll assessing Catholic opinion of Pope Francis in 2014, while those who say he is doing only a fair or poor job more than doubled from 15 percent to 36 percent.

When it comes to spreading the Catholic faith, Pope Francis dipped from 81 percent in 2014 to 56 percent in September among those saying he is doing a good or excellent job, while those who say he is doing only fair or poor climbed from 14 percent to 27 percent.

On the issue of appointing new bishops and cardinals, Pope Francis dropped from 58 percent in the “good/excellent” category in January to 43 percent in that category in September, while those who say he is doing only a fair or poor job rose from 24 percent to 39 percent.

The poll was taken in the wake of allegations by Archbishop Carlo Maria Vigano, the former papal nuncio to the United States, that Pope Francis knew about restrictions having been placed on the ministry of then-Cardinal Theodore E. McCarrick over allegations of sexual misconduct yet did nothing about them. Archbishop Vigano has demanded that the pope resign in the wake of his charges.

The results were based on phone interviews conducted Sept. 18-24 of 1,754 Americans, including 336 Catholics. The margin of error for all poll respondents is 2.7 percentage points, and 6.2 percentage points for Catholics, while the margin of error is larger for subgroups within the Catholic sample, peaking at 10.2 percent for Catholics ages 18-49 and those who attend Mass at least weekly.