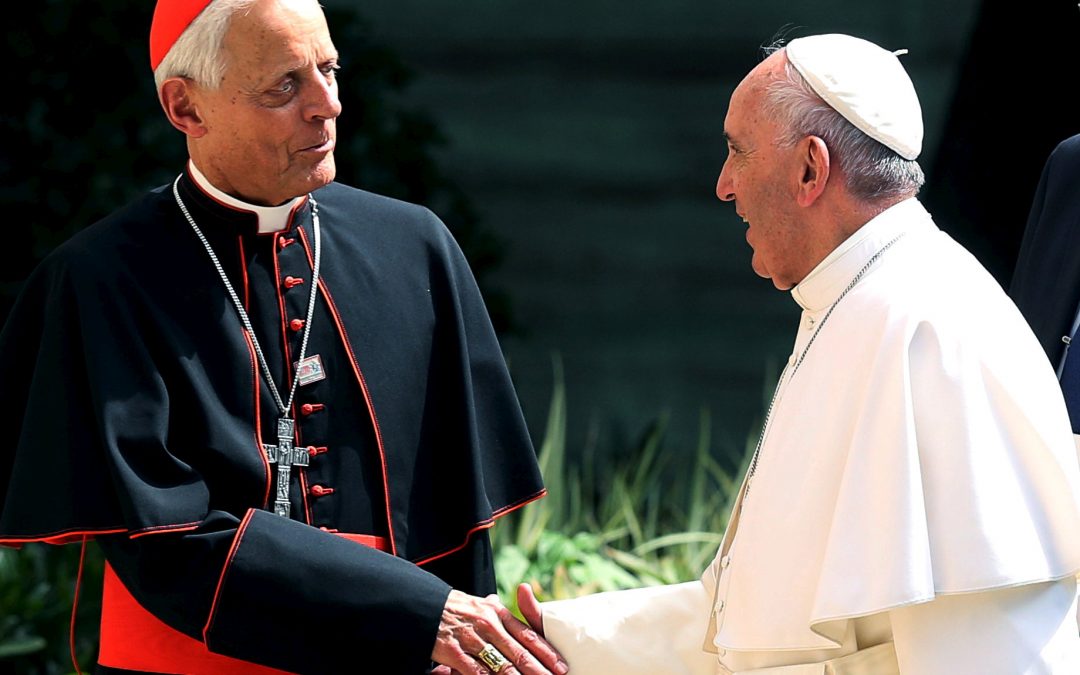 By Catholic News Service
VATICAN CITY (CNS) — Pope Francis has accepted the resignation of Cardinal Donald W. Wuerl as archbishop of Washington but did not name a successor.

When the pope’s decision was announced Oct. 12, the Archdiocese of Washington released a letter from Pope Francis to the cardinal, making clear his support for Cardinal Wuerl’s ministry and leadership, but also praising the cardinal for putting the good of the church first.

“You have sufficient elements to ‘justify’ your actions and distinguish between what it means to cover up crimes or not to deal with problems, and to commit some mistakes,” the pope wrote. “However, your nobility has led you not to choose this way of defense. Of this, I am proud and thank you.”

The archdiocese also announced the pope has named Cardinal Wuerl as apostolic administrator to oversee the archdiocese until a successor is named.

Cardinal Wuerl had been facing pressure to resign after an Aug. 14 grand jury report detailing sexual abuse claims in six Pennsylvania dioceses painted a mixed picture of how he handled some of the cases when he was bishop in Pittsburgh from 1988 until 2006.

The 77-year-old cardinal, the sixth archbishop of Washington, had submitted his resignation, as is mandatory, to the pope when he turned 75, but it had not been accepted until now.

After his resignation was announced Oct. 12, Cardinal Wuerl said in a statement: “Once again for any past errors in judgment, I apologize and ask for pardon. My resignation is one way to express my great and abiding love for you the people of the church of Washington.”

The cardinal also thanked Pope Francis for what he had expressed in his letter, saying, “I am profoundly grateful for his devoted commitment to the well-being of the archdiocese of Washington and also deeply touched by his gracious words of understanding.”

In early September, Cardinal Wuerl told priests of the archdiocese that he would meet with Pope Francis and ask him to accept his resignation “so that this archdiocesan church we all love can move forward” and can experience “a new beginning.”

The Vatican announcement that the pope accepted his resignation came more than two months after the announcement that Pope Francis accepted the resignation of retired Washington Archbishop Theodore E. McCarrick from the College of Cardinals. Archbishop McCarrick faces credible allegations of sexual abuse, including two that involved minors; Pope Francis ordered him to maintain “a life of prayer and penance” while awaiting a trial or other canonical process on the charges.

Cardinal Wuerl has said until the Archdiocese of New York began investigating the claims that Archbishop McCarrick abused a minor, he was never informed of such accusations or even the rumors of Archbishop McCarrick’s sexual harassment of seminarians.

In a letter Aug. 30 to the priests of the archdiocese, Cardinal Wuerl apologized for not being as close to his priests as he could or should have been in the wake of all the abuse-related scandals.

Cardinal Wuerl asked the priests “for prayers for me, for forgiveness for my errors in judgment, for my inadequacies and also for your acceptance of my contrition for any suffering I have caused, as well as the grace to find, with you, ways of healing, ways of offering fruitful guidance in this darkness.”

“Would you please,” he told the priests, “let the faithful you serve know of my love, my commitment to do whatever is necessary to right what is wrong and my sincere solidarity with you and them.”

Cardinal Wuerl has been archbishop of Washington for the past 12 years. He earlier served as an auxiliary bishop of Seattle from 1986 until 1988, when he was named bishop of Pittsburgh, where he served for 18 years.

The Archdiocese of Washington is home to more than 655,000 Catholics, 139 parishes and 93 Catholic schools, located in the District of Columbia and in the five surrounding Maryland counties of Calvert, Charles, Montgomery, Prince George’s and St. Mary’s.

Contributing to this story was Cindy Wooden in Rome and Mark Zimmermann in Washington.