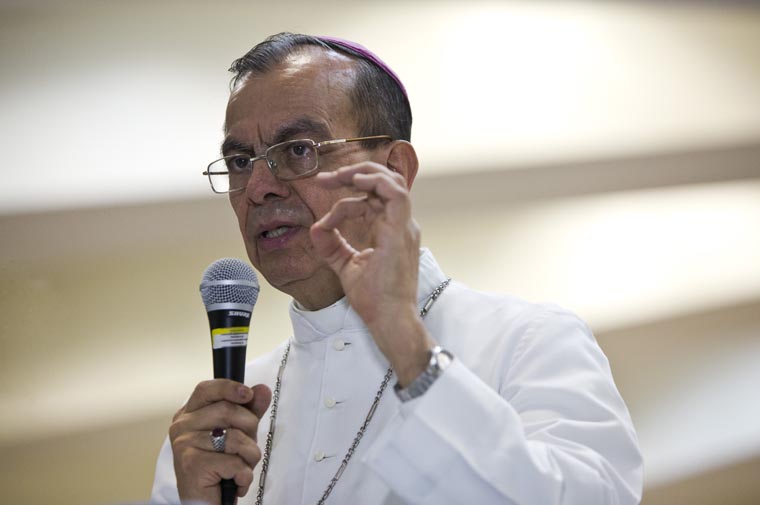 VATICAN CITY (CNS) — Pope Francis announced he will create five new cardinals June 28; the new cardinals-designate come from Mali, Spain, Sweden, Laos and El Salvador.
Unusually, the group of prelates announced by the pope May 21 includes an auxiliary bishop whose archbishop is not a cardinal; he is Cardinal-designate Gregorio Rosa Chavez, 74, the current auxiliary bishop of San Salvador.

After briefly talking about the day’s Gospel reading, leading the crowd in St. Peter’s Square in reciting the “Regina Coeli” prayer and greeting various groups present, instead of wishing everyone a good Sunday and a good lunch — the normal procedure at the noon prayer — Pope Francis made his announcement.

The five new cardinals coming from “different parts of the world demonstrates the catholicity of the church spread across the globe,” Pope Francis said. And the practice of assigning to each of them a church in Rome “expresses that the cardinals belong to the Diocese of Rome,” which, as St. Ignatius of Antioch explained, “presides in charity over all the churches.”

Pope Francis said that June 29, the day after the consistory and the feast of Sts. Peter and Paul, the new cardinals would concelebrate a Mass with him, the entire College of Cardinals and new archbishops from around the world.

The pope also prayed that “with their witness and their counsel,” the new cardinals would “support me more intensely in my service as bishop of Rome, pastor of the universal church.”

With five new cardinals, the College of Cardinals will have 227 members, 121 of whom are under the age of 80 and therefore eligible to vote in a conclave. The number of electors exceeds by one the limit of 120 set by Blessed Paul VI. The next cardinal to turn 80 will be Cardinal Antonio Maria Veglio, retired president of the Pontifical Council for Migrants and Travelers, who will celebrate his birthday Feb. 3.

The Vatican released brief biographical notes about the five who will be inducted into the college in June:

— Cardinal-designate Zerbo was born Dec. 27, 1943, in Segou and was ordained to the priesthood there in 1971. He earned a license in Scripture studies from the Pontifical Biblical Institute in Rome and then returned to Mali as a pastor and professor at the seminary in Bamako.

Ordained a bishop in 1988, he served first as auxiliary bishop of Bamako and then was named bishop of Mopti. He has led the Archdiocese of Bamako since 1998.

According to the Vatican, “he played an active role in the Mali peace negotiations” and has worked for solidarity and reconciliation among the nation’s citizens.

— Cardinal-designate Omella was born in the small town of Cretas April 21, 1946, and did his seminary studies in Zaragoza as well as Louvain, Belgium, and Jerusalem. He was ordained in 1970. In addition to parish work in Spain, he spent a year as a missionary in then-Zaire, now Congo.

Ordained a bishop in 1996, he served as auxiliary bishop of Zaragoza and later as bishop of Barbastro-Monzon, then bishop of Calahorra and La Calzada-Logrorio. Pope Francis named him archbishop of Barcelona in 2015.

— Cardinal-designate Arborelius hosted Pope Francis’ visit to Sweden in October as part of an ecumenical commemoration of the 500th anniversary of the Protestant Reformation.

Ordained bishop of Stockholm in 1998, he became the first native Swedish bishop in Sweden since the Protestant Reformation in the 1500s, according to the Vatican.
— Cardinal-designate Mangkhanekhoun was born April 8, 1944, in Laos. The Vatican did not say in what city, but did say he was educated and did seminary studies in Laos and Canada.

Ordained to the priesthood in 1972 by the apostolic vicar of Vientiane, he was instrumental in training catechists and was known for his pastoral visits to remote mountain villages.

In October 2000, he was named apostolic vicar of Pakse and was ordained a bishop six months later. Since February, he also has served as apostolic administrator of Vientiane, which currently is without a bishop.

He was ordained to the priesthood in 1970 in San Miguel and served overlapping — and sometimes simultaneous — terms as the bishop’s secretary, pastor of a parish and director of the diocesan radio station. From 1977 to 1982, he served as rector of San Jose de la Montafia Seminary in San Salvador, a position that brought him into regular contact and close collaboration with Blessed Oscar Romero, the archbishop of San Salvador, who was assassinated in 1980.