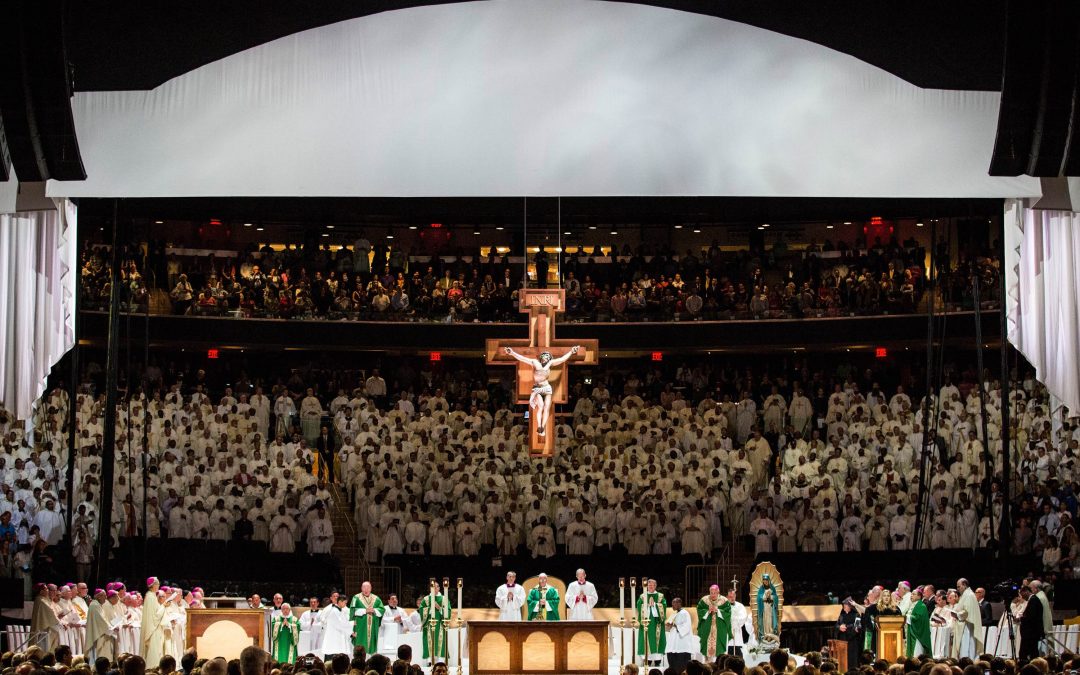 NEW YORK (CNS) — Seeing New York for the first time in his 78 years of life, Pope Francis said he knew Madison Square Garden was an important gathering place for sporting events and concerts. For him, it was transformed into a chapel in the heart of the Big Apple.

True peace in a big city comes from seeing the vast variety of people not as a bother, but as a brother or sister, Pope Francis said in his homily during the Mass Sept. 25 at “The Garden” where 20,000 people gathered to pray with him.

Before vesting for Mass, Pope Francis entered the arena in an electric cart, riding up and down the aisles, kissing babies and blessing several sick children.

In his homily, the pope urged the congregation to go out into the city, to seek the face of Jesus in the poor and suffering and to share the joy of the Gospel with all.

Jesus urges his disciples “to go out and meet others where they really are, not where we think they should be,” Pope Francis said.

“Go out to others and share the good news that God, our father, walks at our side,” the pope told them. “He frees us from anonymity, from a life of emptiness and selfishness” and moves people to encounter and to peace instead of competition.

The pope had visited Ground Zero earlier in the day, participating in an interreligious service for peace. The evening Mass used the readings and prayers for a Mass for peace and justice.

The first reading, from the Book of Isaiah, began with the passage, “The people who walked in darkness have seen a great light.”

People who are faithful to God, the pope said, “can see, discern and contemplate his living presence” in the midst of the city. “The people who walk, breathe and live in the midst of smog, have seen a great light, have experienced a breath of fresh air.”

The pope, who was born in and served as archbishop of Buenos Aires, Argentina, a city of 3 million people, said he knows it is not always easy living in a big city, especially one made up of people of dozens of different languages and cultures.

However, he said, those differences are riches that express “all the different ways we human beings have discovered to express the meaning of life.”

Pope Francis recited most of the Mass prayers in English, although he read the eucharistic prayer in Latin. He preached in Spanish and the prayers of the faithful were offered in Italian, German, Polish and Tigrinya, one of the languages spoken in Ethiopia.

For Christians, the real challenge of big cities is the way that they can “conceal the faces” of people who don’t fit in or even are treated as if they had no right to be there, Pope Francis said. “They are the foreigners, the children who go without schooling, those deprived of medical insurance, the homeless, the forgotten elderly.”

Too many people just walk by them, he said. They have become part of the “urban landscape.”

But being a Christian means seeing Jesus in others, all of them, and actually looking for his face in the faces of those who usually are ignored, the pope said.

The Christian virtue of hope frees people from isolation and self-absorption, it is “unafraid of involvement,” he said, and it “makes us see, even in the midst of the smog, the presence of God as he continues to walk the streets of our city.”