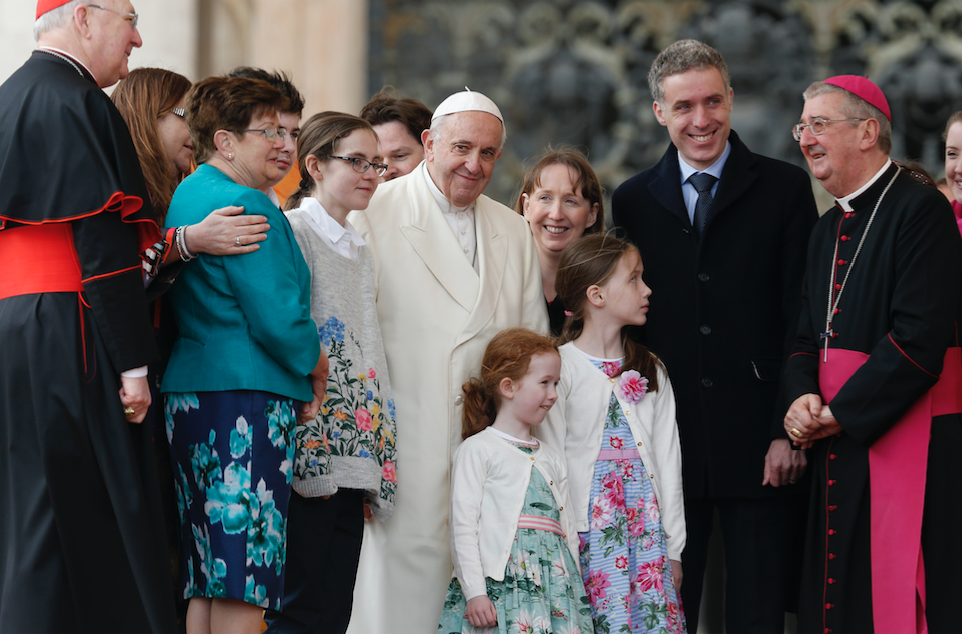 VATICAN CITY (CNS) — Receiving a delegation from Ireland and blessing an icon of the Holy Family, Pope Francis confirmed his intention to visit Dublin for the final days of the World Meeting of Families.

“On the occasion of the next World Meeting of Families, I plan on going to Dublin from August 25 to 26 this year. I thank the civil authorities, the bishops, the archbishop of Dublin and all those who are helping prepare this trip. Thank you,” he said.

Read more: The Catholic Sun’s coverage of the 2015 World Meeting of Families in Philadelphia

The delegation, led by Archbishop Diarmuid Martin of Dublin, president of the world meeting, included two families from Ireland: the Tobin family from Newbridge in County Kildare; and the Bushell family, who moved to Rome in 2016 from Knocklyon, outside Dublin. Cardinal Kevin Farrell, prefect of the Dicastery for Laity, the Family and Life, also was part of the group meeting the pope.

The Holy Family icon, which has been carried across Ireland to help parishes prepare for the Aug. 21-26 world meeting, was brought to Rome for the pope’s blessing during his weekly general audience in St. Peter’s Square March 21.

When the pope greeted the iconographer, Romanian artist, Mihai Cucu, the pope gave him an approving thumbs up and later gave him a special blessing.

Pope Francis chose the city of Dublin to host the world meeting, which will reflect on the theme, “The Gospel of the Family: Joy for the World.” Held every three years, the event brings families from around the world to celebrate, pray and reflect upon the importance of marriage and the family as the cornerstone of people’s lives, of society and the church.