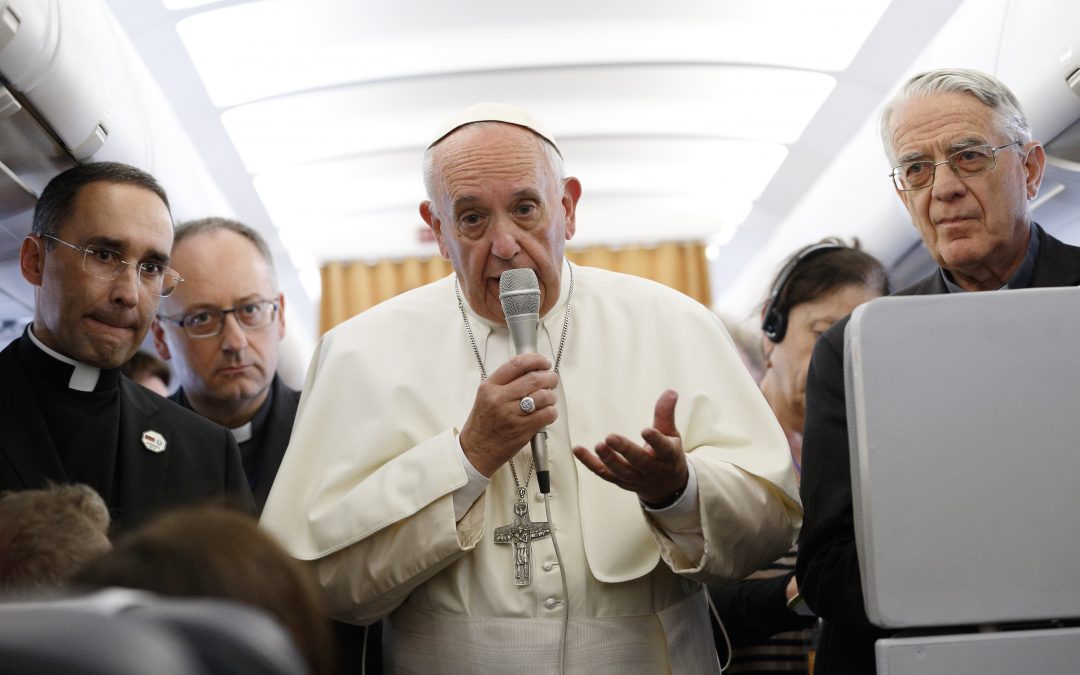 ABOARD THE PAPAL FLIGHT TO ARMENIA (CNS) — Commenting on the peace agreement reached in Colombia, Pope Francis hailed the end of “more than 50 years of war and guerilla warfare and so much bloodshed.”

Pope Francis told reporters flying with him to Armenia June 24 that he prayed Colombia would “never return to a state of war” again.

Although he usually does not answer questions on his flights from Rome to other countries, Pope Francis was asked by his spokesman, Jesuit Father Federico Lombardi, to comment on both the Colombia agreement and the results of a June 23 referendum in England on membership in the European Union.

The decision to leave the EU “was the will expressed by the people,” the pope said.

The English decision, he said, “requires great responsibility on the part of all of us to guarantee the good of the people of the United Kingdom and the good and coexistence of the whole European continent.”

After his brief response to the questions, Pope Francis returned to his normal routine on outbound flights, walking the length of the plane and personally greeting each of the almost 70 media representatives. He collected letters and books and signed a few autographs.

The Colombian government reached a cease-fire agreement June 23 with the Revolutionary Armed Forces of Colombia, known as FARC, ending 52 years of hostilities. The government and the Marxist guerillas have been in talks since 2012, reaching agreement on what the parties describe as five pillars.

The final pillar, the demobilization of the guerillas, was the most difficult to settle. The other pillars cover political participation, rural development, the illicit economy, and victims of the violence and were settled in earlier negotiations.

In the United Kingdom, voters June 23 decided to exit the EU by 52 percent to 48 percent. The decision sent a shock wave through world financial markets and led Prime Minister David Cameron to announce his resignation.

The referendum turnout was 71.8 percent, as more than 30 million people went to the polls. It was the highest turnout in a UK-wide vote since the 1992 general election.

Voters in Great Britain and Wales decided strongly to leave the EU while residents of Northern Ireland and Scotland supported staying in the European bloc.

Britain has two years to complete the withdrawal process under EU rules.