Pope in the pews: Monsignor surprised to have Pope Francis at his Mass 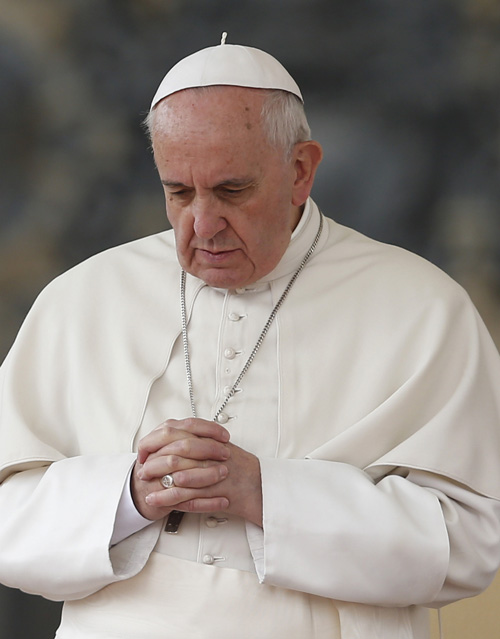 VATICAN CITY (CNS) — From the time he was archbishop of Buenos Aires, Argentina, Pope Francis has said special prayers for catechists on the feast of St. Pius X, who wrote a catechism in 1908.

Pope Francis celebrated a private Mass in his residence very early on the feast day, Aug. 21, but decided to pray for catechists at the tomb of St. Pius in St. Peter’s Basilica.

About 70 people were sitting or kneeling at pews in front of the tomb waiting for a 7 a.m. Mass when the pope arrived, so he joined them, sitting in the front pew.

According to the Vatican newspaper, L’Osservatore Romano, a basilica employee hurried to the sacristy where Msgr. Lucio Bonora, an official at the Vatican Secretariat of State, two other priests from his office and altar boys from Malta were beginning their procession to the altar.

When the procession arrived at the altar, Msgr. Bonora looked at the pope, who nodded as if to encourage him to begin the celebration, which he did.

Msgr. Bonora went down to the pope during the sign of peace and, for Communion, the pope stood in line with others from the small congregation, L’Osservatore said.

After Mass, outside the basilica, Pope Francis told the monsignor that he went to St. Pius’ tomb “to pray for all catechists, entrusting them to his protection as I did every year in Argentina.”

Msgr. Bonora told L’Osservatore that Pope Francis and St. Pius X have a similar style, “a style of church where everyone — pastors and faithful — are brothers and sisters. It’s the style and sensitivity of a man who was placed by the Lord at the service of the entire church, but who wants to walk with all the faithful with simplicity, modesty and the example of the saints.”