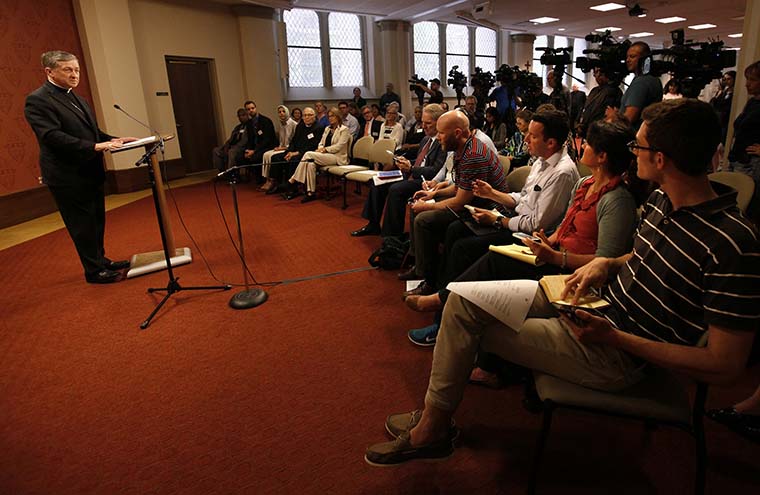 CHICAGO (CNS) — Pope Francis’ encyclical on the environment is “a watershed moment for the church, for humanity and for the planet” that the pope “calls our common home,” Chicago Archbishop Blase J. Cupich said.

He met with the media June 18 at the Archbishop Quigley Center to share the salient points of the document, “Laudato Si’, on Care for Our Common Home.”

“It’s time for the church to be bold — to speak about major issues — and to achieve a new level of relevance in people’s lives,” Archbishop Cupich said.

“We may not know all that science has to learn about climate change, but we do know enough to realize that it’s time to act.”

The archbishop noted that encyclical was addressed not just to Catholics or to people in any specific country, but to everyone on earth.

The news conference was attended by representatives from other religious traditions as well as environmental advocates who have been part of the Chicago Archdiocese’s encyclical working group, convened by the Office of Peace and Justice months ago.

Catholic advocates emphasized that the 180-page document does not break new ground in terms of teaching about humanity’s responsibility to care for creation. Rather, it gathers evidence that the situation has become urgent, and that caring for the earth is a moral issue.

“Our faith dictates that we have to care about and for humankind and we can’t do that without caring for the earth, our common home,” Archbishop Cupich said. “In short, we see the assault on the environment as a fundamental matter of right and wrong.”

The encyclical is clear, he said, that the climate crisis and other ecological problems are not just scientific or political in nature.

“The pope clearly identifies the ecological crisis as essentially a spiritual problem,” he said. “The rupture of the relationship between humanity and the planet is an ecological sin that requires repentance and firm purpose of amendment. The cause is the same as all sin, selfishness.”

That sin has led the earth to fall into “serious disrepair,” and that has a disproportionate effect on the poor and vulnerable, Archbishop Cupich said.

“They suffer most from the degradation of the earth — they are the least protected from the increasingly violent swings of nature caused by global warming,” he said. “The poor have the greatest exposure to air pollution, droughts, unsafe drinking water and the spread of diseases.”

Archbishop Cupich discussed economic aspects of the crisis, saying businesses should not be focused so completely on profits that they hurt the environment and that consumers should think before making purchases.

“The fact that you like it and can afford it should not be the only reasons to buy something,” he said. “The next time you make a purchase, ask yourself: Where was this item made? What conditions produced it? What wages were paid to those who made it?”

The archbishop, who is chairman of the U.S. Conference of Catholic Bishops Subcommittee on Aid to the Church in Central and Eastern Europe, delayed a trip to Ukraine for a day to be in Chicago for the release of the encyclical.

Near the end of his comments, Archbishop Cupich noted that he is the leader of one of the largest organizations in the Chicago area, with 8,000 employees and 2,700 buildings, some of which date to the Civil War. The Archdiocese of Chicago is cutting its water usage, repurposing older facilities, reducing energy use and retrofitting buildings.

He invited others to join the archdiocese in taking action to improve their stewardship of the earth.

“He’s asking us, you and me, to forsake our ‘self-centered culture of instant gratification’ and to focus on more enduring values. And finally, he’s asking us to ‘preserve Mother Earth who sustains and governs us’ for our children, our grandchildren and for generations to come.”

Martin is a staff writer at the Catholic New World, newspaper of the Archdiocese of Chicago.