Pope says he is ‘a bit feminist,’ thanks women religious for hard work 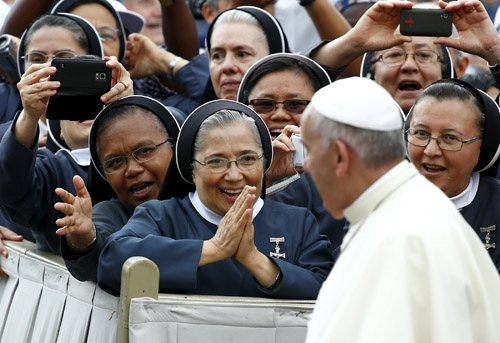 VATICAN CITY (CNS) — Calling himself “a bit feminist,” Pope Francis praised women religious for always heading to the “front lines” to bring the church’s tenderness and motherly love to those most in need.

“The church thanks you for this, it is a beautiful witness. This is being close. Be close! Close to people’s problems, real problems,” he said during an audience Sept. 17 with young consecrated women and men from around the world, including Iraq and Syria.

He began the audience by directing attention to “our martyrs in Iraq and Syria, our martyrs of today,” revealing that he now keeps on him a small cross that a priest held in his hand while he was being murdered for his faith.

“A few days ago in [St. Peter’s] Square, an Iraqi priest came up to me and gave me a small cross. It was the cross being held by the priest who was beheaded for not renouncing Jesus Christ,” he said. The Vatican press office had no information about the priest mentioned by the pope.

About 5,000 people gathered in the Vatican’s Paul VI hall for the hourlong papal audience; they were taking part in the World Meeting for Young Consecrated Men and Women Sept. 15-19.

At the pope’s request, members of the audience asked him questions, which he said he received in advance. The questions came from a Salesian priest from Aleppo, Syria; a member of the Sisters of Charity from India; and a cloistered nun not in attendance but whose question was read aloud. In response, the Jesuit pope spoke 40 minutes off-the-cuff about living out a religious vocation in today’s world.

When talking about how successful evangelizers have a heart filled with fire and are driven to warm other people’s lives with Christ, the pope said he wanted to add something to that.

“Here I would like to — forgive me if I’m a bit feminist — give thanks to the witness of consecrated women. Not all of them though, some are a bit frantic!” he said to laughter and applause.

Women religious “have this desire to always go to the front lines. Why? Because you’re mothers, you have the maternal instinct of the church, which makes you be near” people in need, he said.

He told a story of three South Korean sisters who went to Buenos Aires, Argentina, to help staff a Catholic hospital in the archdiocese he once led, but “they knew as much Spanish as I know Chinese — nothing!”

Nonetheless, the three sisters immediately went to the wards, helping patients, holding them, giving them a smile, and the patients kept praising how wonderful the sisters were even though they never said a word.

“It was the witness of a heart on fire. It is the motherhood of nuns,” he said.

Evangelizing, in fact, is all about showing “with your flesh, with your life” that Jesus Christ is alive, Pope Francis said.

“We are not a soccer club looking for members or supporters,” he said.

Religious men and women can take courses on evangelization and deepen their studies, which “is good, but the ability to warm hearts doesn’t come from books, it comes from your heart!”

Men and women living in religious communities, he said, need to guard themselves against “narcissism,” gossiping and never forgiving one another, which is “one of the sins I often find in communal life.”

Open dialogue and discussion, including with superiors, can lead to arguments, the pope said, but being open to the Holy Spirit means also being able to forgive and not seek revenge, especially by bad-mouthing the other.

“Gossip in a community hampers forgiveness” and draws people further away from each other. The pope told his audience to go to confession if they were guilty of gossiping because “it’s a sin.”

Gossip is a form of “terrorism” because the person causing the damage is hiding in the shadows, never letting the victim defend him or herself, he said.

“Gossip always happens in the darkness, not in the light,” the pope said. “And darkness is the kingdom of the devil. The light is the Kingdom of Jesus.”

The best approach if someone feels slighted or disagrees with someone, he said, is to pray about it first in order to achieve some kind of inner peace and then go directly to the person involved to clearly state the problem.

“Never, never throw the bomb of gossip. Never. It is the plague of communal life,” he said.