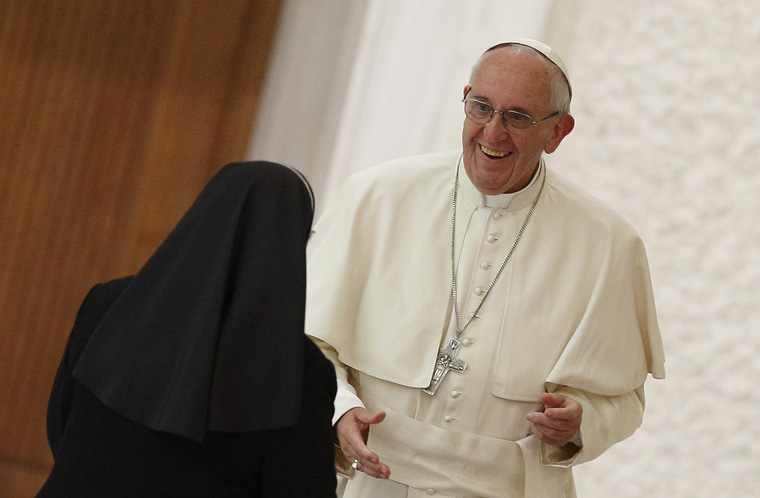 VATICAN CITY (CNS) — Pope Francis told the heads of women’s religious orders from around the world that he would set up a commission to study the New Testament deaconesses and he also insisted more can and should be done to involve lay and consecrated women in church decision-making at every level.

Asked if he would establish “an official commission to study the question” of whether women could be admitted to the deaconate, Pope Francis responded: “I accept. It would be useful for the church to clarify this question. I agree.”

The pope spent more than an hour May 12 responding to questions posed by members of the International Union of Superiors General, repeatedly asking if they wanted further clarification and making funny asides or rephrasing his responses when it was clear they were not hitting the mark.

“I like hearing your questions because they make me think,” the pope told close to 900 superiors general, representing almost 500,000 sisters around the world. “I feel like a goalie, who is standing there waiting for the ball and not knowing where it’s going to come from.”

Asked about deaconesses in the New Testament and the possibility of the modern church admitting women to the permanent diaconate, Pope Francis had said his understanding was that the women described as deaconesses in the Bible were not ordained like permanent deacons are. Mainly, he said, it appeared that they assisted with the baptism by immersion of other women and with the anointing of women.

However, he said, “I will ask the [Congregation for the] Doctrine of the Faith to tell me if there are studies on this.”

The main part of the question was about the lack of influence women religious are given in church decision-making processes. Pope Francis said the obligation to listen to women in the parish, diocese and at the Vatican “is not a matter of feminism, but of right.”

All the baptized — women and men, lay or consecrated — have been given gifts by the Holy Spirit for the good of the entire church, he insisted. The entire church suffers when some voices are excluded from the conversation, he said.

“Our desire is that the church talk with us — like is happening now — and not about us,” one of the sisters told him.

“To talk about someone when they are absent is not evangelical,” the pope said. In the meetings of the Congregation for Institutes of Consecrated Life and Societies of Apostolic Life, “you must be present and I will tell the prefect this,” he said.

“I never imagined there was such a disconnect, truly. Thank you for telling me so courageously and for doing so with that smile,” he said.

However, Pope Francis warned the sisters about the danger of clericalism, which he described as “a sinful attitude,” but one which is “like the tango, it takes two.” There are priests who see themselves as lords of the church, he said, but there also are women and laymen “who ask to be clericalized.”

On the other hand, the pope expressed concern about the number of consecrated women working as housekeepers for priests. Their work is that of “a servant, not of service,” he said, and that “undervalues their dignity.”

The sisters applauded when the pope suggested such priests pay local women in need of a job and let the sisters teach, care for the poor, heal the sick. “And when you superiors are asked [to assign a sister] for something that is more servanthood than service, be courageous and say ‘no.'”

While warning that “the devil enters through one’s pocket,” Pope Francis also urged the superiors to choose their treasurers well, be suspicious of “friends” who promise to invest and increase their money and to ensure that their evangelical poverty is a life of simplicity, not misery.

But many of the women burst out laughing when the pope told them that if their congregations are in serious financial need, they should turn to their local bishop. When they laughed, he jokingly suggested that they were saying their only hope is prayer, “give us this day our daily bread.”

Turning serious, Pope Francis insisted the vow of poverty is a matter of detachment from material goods and commitment to God and to the poor, “but it’s not suicide.”