Pope to Cubans: Look to future with hope, but care for each other 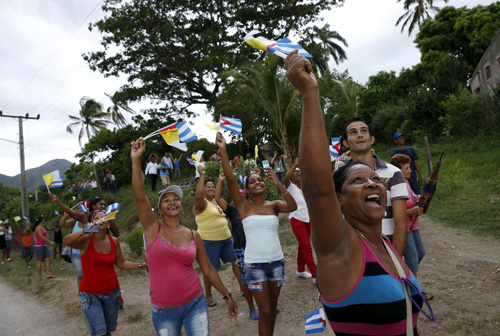 SANTIAGO, Cuba (CNS) — A key task of a traveling pope is to confirm his brothers and sisters in the faith. For Pope Francis in Cuba, that ministry took on added importance as Cuba and its people stand on the threshold of potentially epochal change.

Many people inside and outside Cuba hope that normalized U.S.-Cuban relations will lead to greater communication, trade and exchanges between the two countries. They also hope those experiences will lead to more freedom and democracy on the Caribbean island.

The immediate experience of some of the former Soviet-bloc countries in their move toward democracy 25 years ago showed that openness leads to change and not all of it good with a rise in consumerism, corruption and a loss of a sense of struggling together for the common good.

During his first-ever visit to Cuba Sept. 19-22, Pope Francis called for greater freedom and respect for human dignity in the country. But he also continually added his hope that the Cuban people would love their country, hold on to their tradition of caring for society’s weakest members and would not lose a sense of pride in being Cuban.

Leonardo Fernandez, a Catholic and a member of the government-affiliated federation of university students, asked Pope Francis Sept. 20 in Havana for words that would “renew in us the hope that we can grow, study, work, walk and be happy in this complex reality in which we are living.”

“Help us, Holy Father, to be young people who know how to welcome and accept those who think differently” and to avoid the “great evils” of individualism and indifference. Young Cubans, he said, need to “interpret the signs of our times and take hands to build a Cuba, as our national hero Jose Marti said, ‘with all and for the good of all.'”

Pope Francis responded by explaining that “what gives hope to a people” is not simple optimism, but is people working together, even when things get tough, to make change and build something good.

Ideological and even religious “cliques” not only can slow progress, they can sow enmity, he said.

“Social friendship” and “social enmity” are themes Pope Francis has been pondering publicly for weeks and he returned to the notion when he met the youths. Jesuit Father Federico Lombardi, the papal spokesman, explained to reporters in Holguin Sept. 21 that “social friendship is solidarity with a heart” and a commitment to dialogue and to caring “for the smallest” members of society.

Pope Francis told the young people to beware of thinking they need to “throw stones at those who are different.”

“Why not extend a hand and look for what we have in common,” he said.

In Buenos Aires, he said, he watched a new parish building an oratory for the young people. All sorts of people turned out to help. “I went at the invitation of the pastor and I saw that one of them, who studied architecture, was a communist. Another was a practicing Catholic, but they were all working together.”

“Social friendship builds,” he said, “enmity destroys and the world is destroying itself with war because we do not understand that we have something in common.”

Especially for young Cubans, he said, there lingers a feeling that they only way they can realize their dreams is to leave the island.

“We want a future of hope for Cuba and the Cuban people and that is what the church is working for here,” the archbishop said.

At Mass in Holguin, Pope Francis insisted that even someone who seems to be an enemy — or even “a traitor” like the tax collector St. Matthew was — can change, sharing his conviction that each person has the potential to become a better person and, in fact, a friend.

Throughout his pontificate, the pope has emphasized his belief that goodness exists in every person, including the communists he knew in Argentina. Although he said their ideology was flat-out wrong, it did not prevent him from identifying and admiring what was good in them.

The merciful gaze of Jesus, a motif common in Pope Francis’ homilies, is a filter that recognizes each person as a brother or sister, created by God. It is the same filter that Cubans must use to see each other — whether they stayed in Cuba or emigrated — and one that Cubans and U.S. citizens must use as well.

But while those relationships need to develop further, Pope Francis asked Cubans to take care of each other.

Cuba’s Catholic community, he said, has known suffering, yet it knows how to stand “with open arms, to keep walking in hope.”

As things change, he said Sept. 20 at Mass in Havana, “care for and be at the service of the frailty of your brothers and sisters. Do no neglect them for plans which can be seductive, but are unconcerned about the face of the person beside you.”

The importance of an individual or of a nation, he said, is measured by care for one another.

Contributing to this story was Robert Duncan in Holguin.