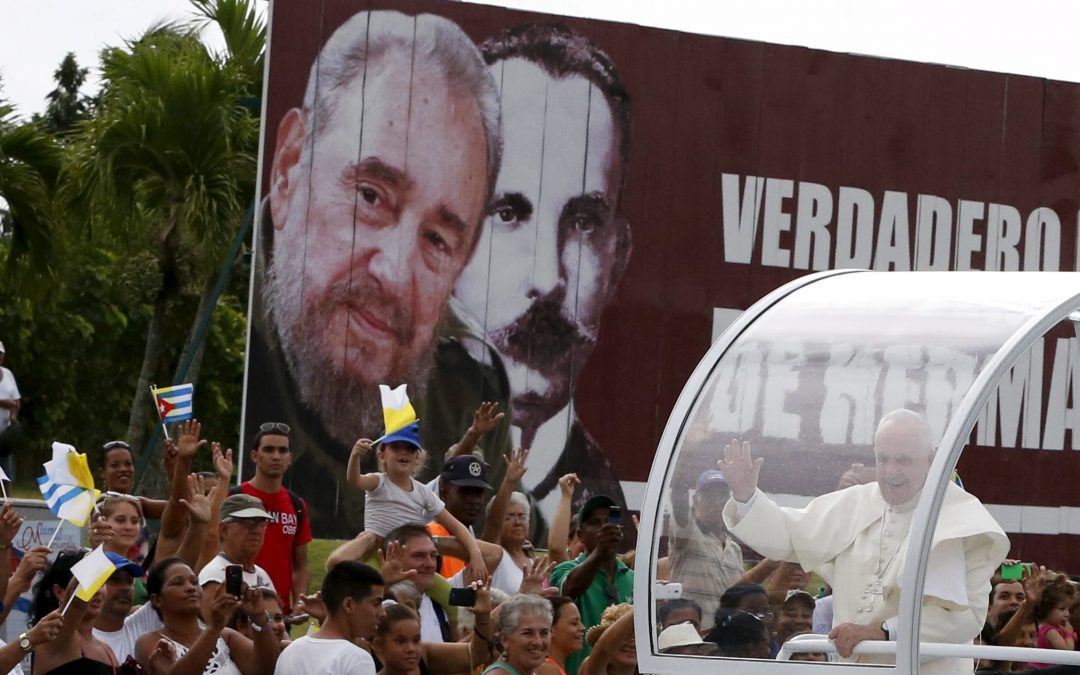 HAVANA (CNS) — Although it was not part of his formal program, Pope Francis took time after Sunday Mass to visit Cuba’s ailing former leader, Fidel Castro.

Jesuit Father Federico Lombardi, Vatican spokesman, said that after the Mass Sept. 20 in Havana’s Revolution Square, Pope Francis was driven to the ailing 89-year-old’s residence for the meeting, which lasted 30 to 40 minutes.

In the presence of Castro’s wife, children and grandchildren, Father Lombardi said, the meeting was “familial and informal.”

Pope Francis, he said, picked up on the conversation Pope Benedict XVI had with Castro in 2012. At that time, Father Lombardi had said Castro had asked about how the church is handling the ethical challenges posed by scientific and technological developments and the relationship between faith and reason, as well as the pope’s concerns about a growing number of people who don’t believe in God or act as if God does not exist.

“In the end,” Father Lombardi said at the time, “Commandante Fidel asked the pope to send him a few books” dealing with the questions he had.

Pope Francis arrived at the meeting at Castro’s home ready to continue the discussion and fulfill Castro’s desire to read more. Father Lombardi said the pope gave Castro two books by the Italian catechist Father Alessandro Pronzato. One of the books is about the importance of humor and happiness in the spiritual life and the other on the Gospel and social issues.

In addition, he said, the pope brought a book and two CDs of homilies by Jesuit Father Armando Llorente, who had been one of Castro’s teachers in high school in Belen, Cuba.

To round off the gifts, Pope Francis also brought the former Cuban leader copies of his apostolic exhortation, “The Joy of the Gospel,” and “Laudato Si’,” his encyclical on the environment.

Castro returned the favor by giving the pope a copy of “Fidel & Religion: A Conversation With Fidel Castro” by Frei Betto.

After lunch and a rest, Pope Francis made a formal visit to President Raul Castro in Havana’s Palace of the Revolution.
While the pope and president were meeting privately, Cardinal Pietro Parolin, his secretary of state, and top Vatican diplomats were holding talks with Cuban Foreign Minister Bruno Rodriguez Parrilla and his staff.
The pope and president spent about 45 minutes speaking privately before exchanging gifts. Pope Francis gave the president a mosaic of Our Lady of Charity of El Cobre made in the Vatican mosaic studio. The pope invited the artist, Valentina Ambrosi, to join his entourage for the trip, and he introduced her to Castro.
Castro’s gift to the pope was an enormous crucifix, which had been covered with a huge while cloth. The president ceremoniously unveiled it, revealing the cross made of bundled boat oars.