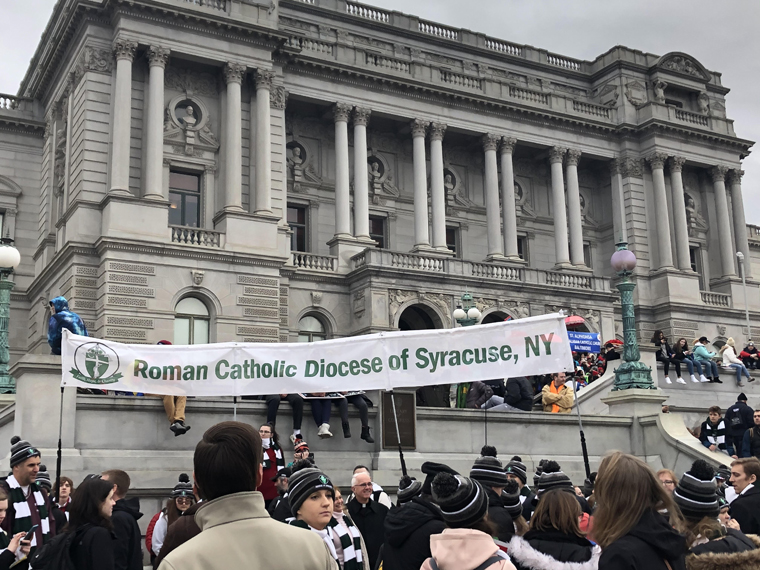 There are two kinds of anniversaries, those we celebrate for joy and prayer and those we mark for reflection and prayer.

This Saturday, January 22, falls into the latter. It was January 22, 1973, that the Supreme Court of the United States handed down the decision on the case of Roe v. Wade (and Doe v. Bolton, the companion decision) that effectively legalized abortion and removed legal protection from human beings prior to birth in the U.S.

In Syracuse, Bishop Douglas J. Lucia will preside and give the homily at a special Mass and Holy Hour for Life, marking the observance at the Cathedral of the Immaculate Conception in Syracuse. Mass begins at 10 a.m. with the Holy Hour to follow. No pre-registration is necessary for the Mass and Holy Hour.

At noon, just a few blocks away, the local March for Life will be held, commencing in Armory Square near the Museum of Science and Technology (MOST). The local march is sponsored by the Syracuse Right to Life Association. The march route will proceed from Armory Square on Jefferson Street to Columbus Circle where the Onondaga County Court House faces the diocesan Cathedral.

James Salamy, J.C.L., the Coordinator of Public Policy for the Diocese of Syracuse, will speak at the event, focusing on the expected Supreme Court decision this June in the case of Dobbs v. Jackson Women’s Health Organization. Arguments in this case were heard late in 2021 and many observers believe that the expected decision will strike down Roe v. Wade and open the door to restore a level of protection for the unborn.

That battle, as Salamy points out, will then be fought at the state level.

“The importance of the Dobbs case is that it is a once in a generation opportunity. … It can redefine the landscape of abortion in the United States as a whole,” says Salamy. “What we have here in Dobbs is the real potential to have Roe v. Wade overturned.”

Salamy points out that if that happens, the fight for protection of life doesn’t end but instead shifts to different governmental venues.

“The governance for abortion would go back to the states,” Salamy adds, “and here in New York State we would have a lot of work to do in terms of respect for human life … for ending abortion … for changing hearts and minds one at a time so that abortion is unthinkable to anyone as an option.”

Before Roe v. Wade, abortion was governed by states, and this is a first step in making bigger change.

“What we don’t think will happen is that the Supreme Court will declare abortion illegal or define personhood, as much as we would like to see that happen,” according to Salamy. “We think they will overturn the decision and return it back to the states. … There is still much work to be done.”