‘Preaching not just from the pulpit, but also in the streets’ 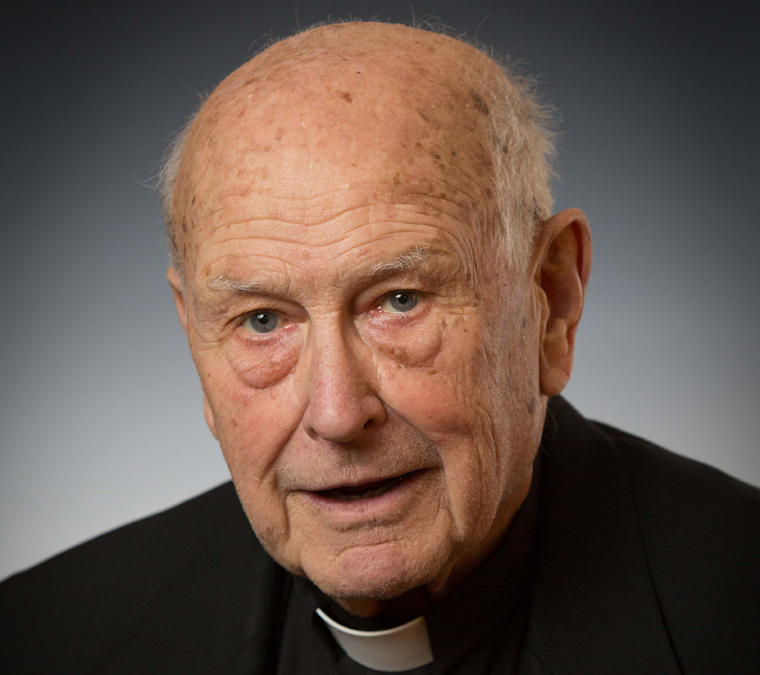 “As a priest he celebrated this banquet of the Eucharist for 65 years,” said his funeral Mass homilist, longtime friend Father Timothy J. Taugher. “He loved banquets because he loved food. His preference would always be to eat later in the evening. It didn’t take long for him to cook because the steak was only on for five minutes per side. He loved to entertain by hosting a gourmet dinner. …

“He celebrated life. For Tom eternal life didn’t begin on January 26th, he lived the fullness of life for his 89 years.”

“Everyone liked Tom,” said Father Taugher, who was attending Catholic Central High School in the 1960s when he first met Father Hobbes.

Father Taugher told the congregation: “Father Tom Hobbes loved being a priest. His faithfulness, loyalty, enthusiasm, and joy — reflected in his life and ministry — are evidence to me of someone who loved what he was about, and found meaning in life. He was a priest through and through. Parishioners, faculty, students, and friends saw in Tom a person who had an authentic spirit, who could laugh at himself, especially when he did his rendition of ‘The Twelve Days of Christmas.’

“He lived his priesthood with sincere humility; he didn’t want to make it about himself, but someone greater, Jesus Christ. How wonderful these qualities are.”

Gaudium et Spes (On the Church in the Modern World), published by Pope Paul VI in 1965, may have been a catalyst for Father Hobbes, Father Taugher said.

The document, he said, encourages the Church “to work for the enhancement of human dignity, and the common good. To read the ‘signs of the times’ in light of the Gospel. Tom did exactly this. …

“If you looked closely at his picture in his obituary, you would notice he had … in his lapel the red ribbon, worn as an awareness in solidarity with people living with HIV/AIDS. You really don’t see too many people wearing the ribbon today as regularly as he did. It speaks to me of his solidarity with the suffering, vulnerable, and marginalized. …

“He preached the Gospel through the lens of our Catholic Social Doctrine of the Church. Not only in his parishes, in the school community, but in our wider community here in the Southern Tier.”

Father Hobbes, he said, belonged to labor/religion and citizen-action groups. He joined the public witness that “was taking place for health care, peace, immigration, and environmental causes,” Father Taugher said. “He saw his presence to be important, a way of putting his faith into action. He was preaching not just from the pulpit, but also in the streets.”

Father Hobbes, who served on the Broome County Catholic School Board, always championed Seton Catholic Central High School. “He truly had the ministry of presence,” Father Taugher said, “meaning he did not miss a sports event, even in retirement. He did not miss being at the hospital, wake, or funeral of anyone who was in one of his parishes, or had any connection to the school. My friends, this is quite a large population of people.

“Even as an educator and administrator the principles of justice were a priority. He wanted and desired that our Catholic education was for everyone who wanted to attend, especially those whose financial resources were limited.  …

“The theme for this year’s Catholic Schools Week can also be said of Father Tom Hobbes: Faith, Excellence, and Service.”

He appreciated the arts too, serving as a board member of the Tri-Cities Opera. “His enthusiasm of opera was not only to attend the performances here in our area,” Father Taugher said, “but also to make regular trips to New York City for their productions at Lincoln Center.

“Some of you may have been on some of his famous excursions to New York for the opera, and wonder how you returned home safely and one piece. Imagine being in school all day, then driving three hours to New York City, attending a performance, going out to dinner, and beginning the drive home.

“Only to arrive very late, and being in school with minimal sleep. I believe the last opera he saw was in the fall of 2019, Tosca. I am sure it was an opera he loved because it is a political thriller, set in a time of great political unrest. Again, it certainly connected with Tom.”

Every year, Father Hobbes listened to Wagner’s Ring cycle, recalled Deacon Picciano. Another favorite was the Binghamton Philharmonic Orchestra’s Messiah, by Handel. “He usually started a standing ovation when it was all over,” Deacon Picciano said, “and he’s the one who clapped the loudest, and he’s the one who you could hear above everybody else shouting ‘Bravo! Bravo!’ It was so important for him to be there.”

Father Hobbes was Deacon Picciano’s guidance counselor in the 1970s at Seton Catholic Central. In 1999 Father Hobbes hired the future Deacon Picciano to work at Christ the King, which later merged with Our Lady of Angels to become Church of the Holy Family. “He’s the one who encouraged me to follow the call to the diaconate,” Deacon Picciano said.

He recalled the flood of 2006 when the Christ the King basement filled with four feet of water. “He approved of us also reaching out to the community as we’d done before to help people get food and supplies,” he said. Father Hobbes also invited mental-health counselors to use the church as their base.

“He was a sought-after confessor,” Deacon Picciano said. “A lot of people would request him for Anointing of the Sick; and once, I’m told, he walked from the priest’s residence on Seminary Avenue in Binghamton — that’s like a three- or four-block walk — over to Lourdes Hospital to anoint someone; the only thing is it was in a blinding snowstorm, and he walked all the way. …

“He was always at a wake or always at a funeral, and he seemed to go to many, many, many of them. And what he told me once was that … he learned it from his mom — his mom [who died at age 100 in 2002] … used to go to wakes and funerals in the Utica area, and it made such an impression on him, what his mom did to be present for people, he picked that up in his priesthood.”

“He was really close to God,” Deacon Picciano added, as evidenced by his summertime jaunts to Greenwood Park, about 20 minutes away: He would pack a dinner, take his breviary and chair, and  swim and pray before returning home.

Bishop Lucia noted that Father Hobbes had a hefty file in the chancery: “It was all good. … It shows he’s been around for 65 years.” He quoted from Bishop Cunningham’s letter commending Father Hobbes on his 60th anniversary.

The third paragraph of the letter states: “I commend you for these years of dedicated service to both the diocese and the people whom you have served. Thank you for living and effectively relating the Gospel message. … Your approachable good nature, along with your humor, commitment to social justice, and sensitivity always makes people feel the power of your understanding love.”

Bishop Lucia also noted the prayer “Jesus Meek and Humble of Heart … Make My Heart Like unto Thine.”

He said: “For me, that describes the life of Father Tom Hobbes as a priest — trying always to be Christ to those whom he met.”