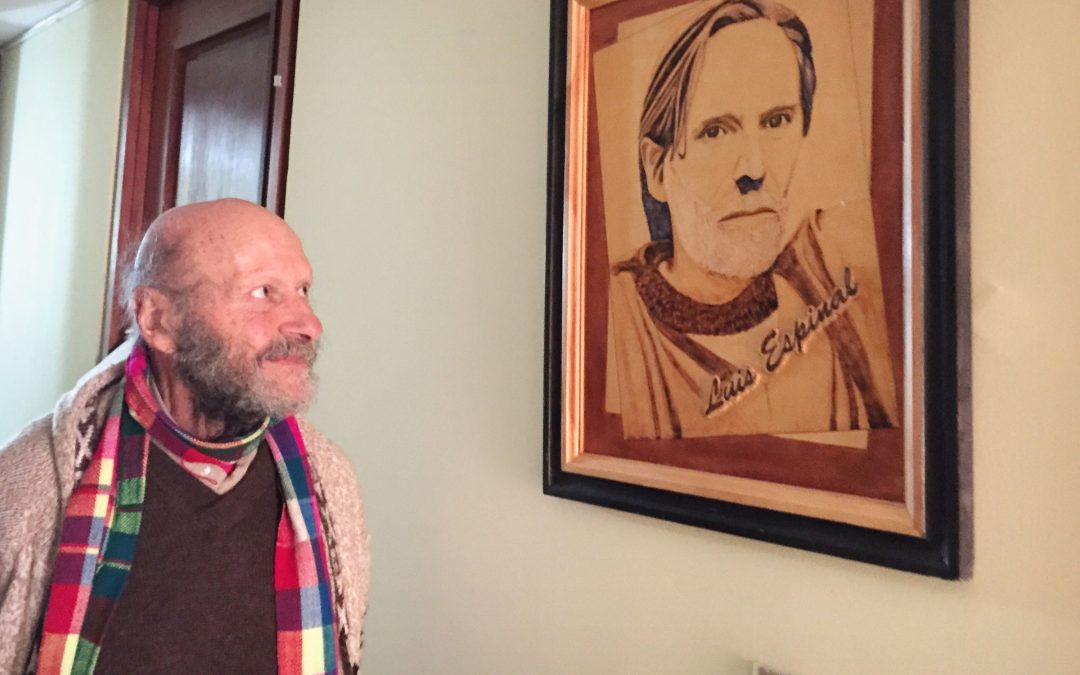 LA PAZ, Bolivia (CNS) — Jesuit Father Luis Espinal was returning from a movie in March 1980 when he was intercepted, tortured and killed. His remains were found in a landfill. Paramilitaries were blamed for his death. Outrage ensued, with an estimated 70,000 Bolivians attending his burial in La Paz.

“I think it probably scared those that killed him,” Jesuit Father Xavier Albo, 80, who moved to Bolivia in 1952 and shared a room with Father Espinal in the 1970s, said of the societal response. “They thought that they had killed only a semi-important person in the church. In fact, there were people (at the funeral) who hadn’t had much affection for him.”

The Spanish-born Father Espinal is considered a martyr by Bolivians, and remains relevant in the country’s affairs 35 years after his murder. On July 8, Pope Francis prayed at a site along the highway leading from the airport in El Alto to the capital city La Paz, near where Father Espinal’s body was found.

Briefly addressing hundreds of people who gathered at the site, Pope Francis referred to Father Espinal as “our brother” and described his ministry as “preaching the Gospel and freedom.”

“Espinal preached the Gospel and that Gospel irritated. And so they eliminated him,” the pope said.

Friends such as Father Albo and members of government, social movements and religious communities say his work brought democracy to Bolivia as it went from rule under military dictatorship to eventually electing an indigenous president, Evo Morales, in 2005.

The turning point in Father Espinal’s struggle, Father Albo told Catholic News Service, was a hunger strike against the military government in 1977. Father Espinal, joined by Father Albo and several female miners, started Dec. 27, though they were warned the holiday season was not good for such protests. But their actions inspired thousands of others to follow suit. National elections soon followed.

“It was the beginning of the democracy that we continue having in Bolivia,” Father Albo said, “with all the ups and downs that democracies have.”

The pope’s presence speaks to Father Espinal’s enduring impact, along with the political changes in Bolivia. The landlocked country has experienced unprecedented government stability and economic growth since Morales took office in 2005, though church-state relations have soured during that time.

“There was a period in Bolivia when governments changed every time it occurred to the military to carry out a coup and replace the president,” said Julieta Tovar, a journalist and spokeswoman for the papal visit in El Alto, which neighbors La Paz. “This is what Luis Espinal struggled against.”

The timing for a revisiting of Father Espinal’s role appears opportune, especially as the pope has placed a priority on promoting prelates who worked for the poor and clashed with the authorities of their times. Father Espinal was murdered just two days before Blessed Oscar Romero, the Salvadoran archbishop, was shot dead while celebrating Mass — timing not lost on many observers.

“The fact that there are these killings: a bishop dead for defending the people, Luis Espinal, dead for defending the values of democracy and liberty … (it) awakens a great interest in this priest and lifts the level of awareness to the entire country and the whole world,” said Bishop Eugenio Scarpellini of El Alto. “He was part of the movement for democracy. There were other priests, who nobody knows about. There were seminarians killed in it. … He’s the symbol and rightly so.”

Like Blessed Oscar Romero, Father Espinal cut a controversial course in his country. Some observers, though, see opportunism and politics in the invocation of his name and associating it with the development of democracy — or at least the democracy that brought Morales to power and allowed him to stay there and win approval for rewriting the constitution.

“Espinal is part of the iconography of the left in Bolivia,” said Rafael Archondo, director of the Jesuit-run news service Agencia de Noticias Fides.

With Father Espinal, “the pope and Evo (Morales) coincide,” on the priest’s importance, he said, possibly helping to build better relations between the Bolivian government and the Vatican.

Father Espinal was born into a religious family in Spain in 1932, during the Spanish Civil War. He joined the Jesuits — like an older brother; a sister became a Carmelite — and wanted to go to India, but missionary visas were unavailable, Father Albo said.

Father Espinal studied communications and went to work for Spanish television, producing a Catholic program on current affairs. He resigned after a story on internal migrations and slums was canceled without his superiors even seeing it.

He moved to Bolivia in 1968 and “was reborn,” Father Albo said. “He fell in love with the country” and became a citizen in two years, renouncing his Spanish citizenship in the process.

Father Espinal founded a newspaper, worked in TV and film taught communications in local universities and wrote movie reviews — which included “indirect” criticisms of the military rulers. He wrote poetry in Catalan and read the Bible in Greek.

Father Albo showed a reporter a published photo of a crucified Christ attached to a homemade hammer and sickle, instead of a cross, that Father Espinal kept by his bed.

“He was of the left. This is certain. But he never belonged to any party or pretended to be part of one,” said Father Albo.

Father Espinal “gave a lot of importance to the dialogue between Marxists and Christians,” he explained. “It was not pro-Soviet … (it was) the need for the church to be close to the popular sectors. Some understand this, others don’t. To me it is very clear.”