Relics of St. Maximilian Kolbe venerated by hundreds in Syracuse 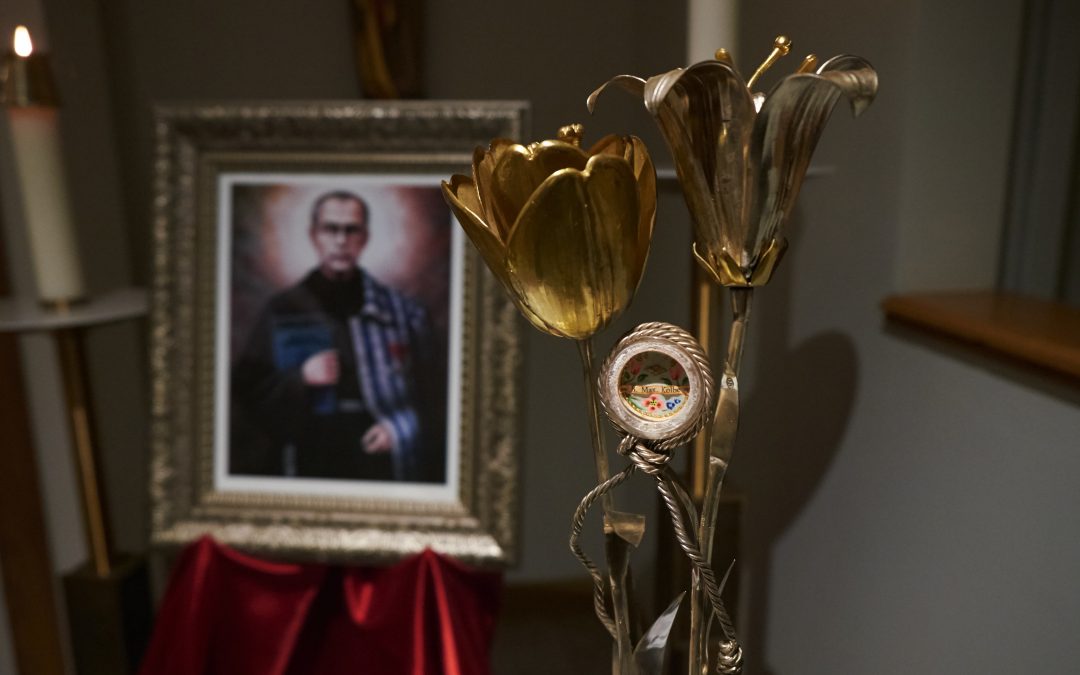 SYRACUSE — Because of a barber’s apparent sense of posterity in 1939, a procession of people were able to spend a prayerful moment or two gazing upon a saint’s strands of hair last weekend.

St. Maximilian Kolbe “was a Franciscan Friar who was killed at Auschwitz by the Nazis. He sacrificed his life to take the place of a young father who had been selected for execution. This selfless act of love made him a martyr of charity. Ultimately [he] was killed by an injection of poison and for this reason he is also the patron saint of people with addictions,” according to information supplied by The Franciscan Place at Destiny USA, where the saint’s relics were venerated June 3.

To commemorate the 75th anniversary of St. Maximilian’s martyrdom, the Our Lady of the Angels Province of the Conventual Franciscan Friars scheduled a pilgrimage of his relics.

Father Rick Riccioli, OFM Conv., the pastor of Assumption, is a member of the same religious order to which St. Maximilian belonged.

Father Riccioli said he was very pleased by the turnout of hundreds of people who venerated the relics on the weekend. They came from all over Central New York and other places including the Southern Tier and Utica.

“People were very excited to have the opportunity,” he said. “They had a lot of questions about where the relics were from.”

Such a relic, he said, “is just a connection to someone we love, to someone who is a model for us. But it’s not a magical object. It’s a way we can physically stay in touch with someone. And hopefully we can imitate his dedication to preaching the Gospel and spreading the good news and his willingness to sacrifice himself for others.”

The Franciscan Place still has items for sale related to St. Maximilian, including books, medals, and holy cards. She said the gift store will also order hefty books of St. Maximilian’s writings for people who want to read them.

Father Robert Amrhein, OFM Conv., conducts his sacramental ministry at The Franciscan Place. Father Amrhein said that back when the Nazis came to power, a beard was a dead giveaway for a Franciscan priest.

“And so they cut it off,” Father Amrhein said, “and he told them to burn it. And the brother who was told to burn it was very disobedient; he threw it in the furnace but the furnace wasn’t lit, so after he went out he took it back. And that’s what was left after his [St. Maximilian’s] body was burned [by the Nazis].

“The brother was trying to save the things because that beard was so precious to them, and to give it up was a big sacrifice they were making.

“I think he saved it the same as you save pictures … of people that are special to you; I think that’s what he had in mind, and then afterwards it turned out to be a relic.”

That barber-friar was “one of the old Polish brothers,” Father Amrhein said, “who wasn’t very obedient, but his indiscretions turned out to be God’s will.”

In his welcoming remarks after he helped set up the golden reliquary containing St. Maximilian’s beard hairs at The Franciscan Place, Father Adam Keltos, OFM Conv., led approximately 20 people in this prayer:

“O God, who gave the Church and the world the Franciscan Friar Priest and Martyr St. Maximilian Kolbe, burning with love for the Immaculate Virgin Mary, and with apostolic zeal for souls and heroic love of neighbor, graciously grant through his intercession that striving for your glory by eagerly serving others, we may be conformed even unto death to your Son, who lives and reigns with you in the unity of the Holy Spirit, one God, forever and ever. Amen.”

St. Maximilian’s dedication to Mary began when he was a child. Father Keltos said that when St. Maximilian was about 10 years old, “the Immaculate Virgin appeared to him and offered him the choice of two symbolic crowns: the white of chastity and the red of martyrdom. So we literally chose red roses and white roses [in two vases] to be adorning the relic of our saint.”

The Blessed Mother offered him those two crowns, and he chose them both, Father Keltos said. He called it “a mystical experience that young Maximilian Kolbe had as a boy before he ever entered the seminary.”

St. Maximilian was ordained a priest in 1918. “Total dedication to Mary was the added ingredient to a life of strict Franciscan observance,” Father Keltos continued.

St. Maximilian died from an injection of carbolic acid on Aug. 14, 1941. It was the eve of the Feast of the Assumption of the Blessed Mother.

“Very interesting,” Father Keltos said, “because his total life was dedicated to the Immaculate Mother of God.” St. Maximilian was beatified by Pope Paul VI in 1971 and canonized by Pope John Paul II in 1982.

One of the earliest arrivals to view the relics at The Franciscan Place was Patrick Fiumano of Syracuse.

“I was always fascinated by saints such as Maximilian Kolbe,” Fiumano said. “I’m familiar with some of his history, his martyrdom at Auschwitz, how he gave his life up for a fellow prisoner [that] happened to be a young father; and Maximilian Kolbe figured that his life was more precious than maybe his own, and it was a very sacrificial decision that he had made.

“I thought that required such great compassion, such great love, such great faith and devotion to our Lord Jesus that I have just always been overwhelmed by his story, his kindness and his charity.”

Another early arrival to view the relics was Patricia Johnson, a Bishop Ludden graduate who now lives in Ashland, Va., near Richmond. She was visiting her mother, Grace Grey, in Jamesville.

Johnson admires St. Maximilian because, among other great achievements, he founded the Militia of the Immaculata, a movement that arose from his devotion to Mary.

“And I relate to that because I was in the military myself,” she said, “so I like the idea of being a part of God’s army and a force for good in the world.”

Rachel Casey, of Fayetteville, viewed the relics with her family. The sacrifice that St. Maximilian made, “to me, is so touching,” she said. “So that’s what inspired us to come and see his relics.”

Lisa Stack, of Cazenovia, said that it was important for her to show her children the relics. She attended with her daughters, Clare, 6, and Bernadette, 17 months, and her son, John, 3.

She said that her intention was to “increase my humility for the great sacrifice that St. Maximilian Kolbe gave, in light of what I see as challenges during the day. It really put things in perspective.”

“Well, I think Maximilian Kolbe’s story is inspirational,” said Father Mike Ackerman, of Pittsburgh. He was visiting Syracuse for the ordinations of Fathers Peter Tassini and Kenneth Kirkman.

“I think any time that you can show relics or show Catholic devotion, you can’t beat that,” Father Ackerman said. “Plus, today’s the Feast of the Sacred Heart. And you have a martyr that conformed to that heart, had a heart of charity.”