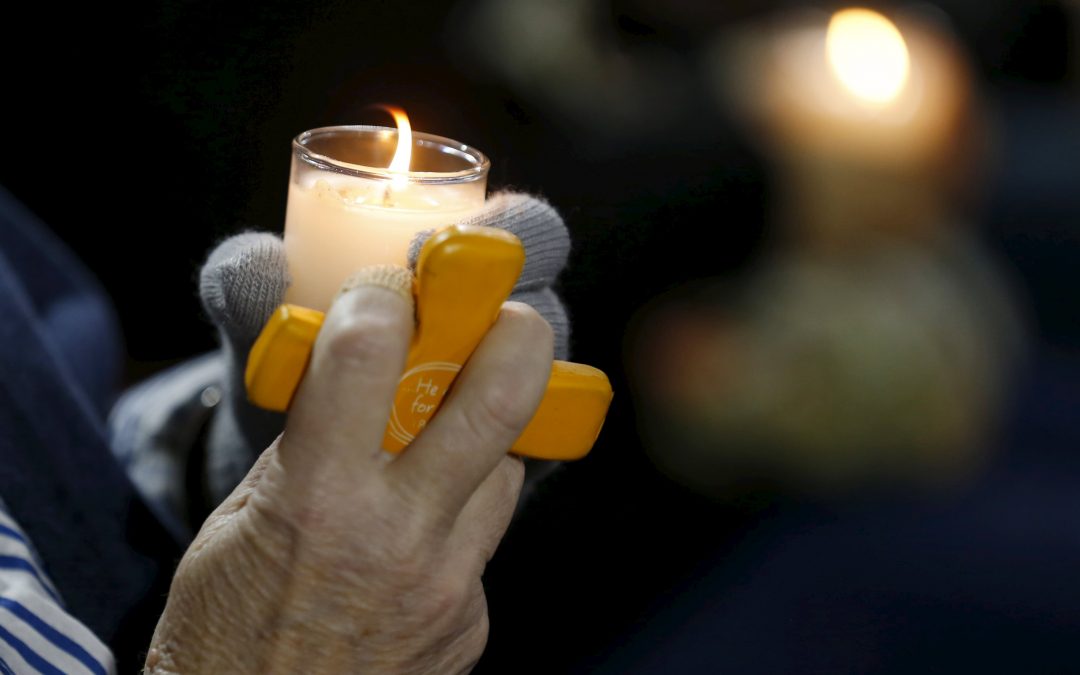 OXNARD, Calif. (CNS) — Arriving in the late morning Dec. 2 at the San Bernardino diocesan pastoral center for his job in the diocese’s Office of Worship, Chris Estrella knew something was very wrong.

“I could see a police blockade of Waterman Avenue, which is where the Inland Regional Center is located,” said Estrella, music and liturgy assistant. “That’s less than two miles from the pastoral center. Then I saw a lot of law enforcement in the area — and I needed to use my key to get in the building, which is unusual.”

Once at his desk, Estrella turned on his computer and saw the reason for the blockade and increased security: The Inland Regional Center had become a murder scene, with 14 people killed and 17 more wounded.
“At that time, realistically, I felt safe,” Estrella, 27, told Catholic News Service Dec. 3. “But I worried about my family — my parents, my siblings including my little brother who attends Our Lady of the Assumption School not that far away. Fortunately they were all safe.”

But the pastoral center — and Catholic schools in the city — remained on lockdown for several hours until about 2 p.m. “when they began shuffling us out and told us, ‘Go home, be with your families,'” said Estrella. The office remained closed Dec. 3, and was already slated to be closed Dec. 4 for first Friday observances.

The Office of Worship canceled a Dec. 3 formation class for the Rite of Christian Initiation of Adults program at the pastoral center. In a statement, the office expressed its sorrow at the killings and its solidarity in prayer with families and victims of the tragedy, saying, “Let us pray for peace and mutual tolerance, moving forward.”

While no additional prayer services had been scheduled as of Dec. 3, Estrella noted that the diocesan Department of Life, Dignity and Justice had previously scheduled an evening vigil Dec. 5 for victims of violence at Sacred Heart Church in Rancho Cucamonga, in the western portion of the diocese that includes San Bernardino and Riverside counties.

“I expect we will be remembering the victims of the (Inland Regional Center) at that event,” said Estrella, who added that more plans for prayer liturgies and Catholic community outreach will be discussed at a Dec. 7 meeting with diocesan staff and led by San Bernardino Bishop R. Gerald Barnes.

“Like Bishop Barnes said (in a Dec. 2 statement), this is a time for prayer, a time to pray for peace,” said Estrella. “I know there are many people all over who are praying for us here in such a terrible time, and I want to extend my thanks to all of them. We don’t need any more violence.”

Bishop Barnes attended a candlelight vigil Dec. 3 at San Manuel Stadium in San Bernardino to remember those who died in the shooting. During the service, the names of the 14 people who were killed were read aloud.

The bishop, in a tweet sent Dec. 3, said it was a “blessing to come together with leaders of our community tonight” to pray for peace and healing.

In a statement the previous day, Bishop Barnes urged people to pray for unity and healing after the mass shooting.

The bishop called on people to pray for “all of the victims of this horrific incident and their families” and also asked for prayers for law enforcement officers who at the time were still “pursuing the suspects in this case.”

“Our community of San Bernardino has faced great challenges through the years. Let us come together now in unity to bring light to the darkness of this day,” Bishop Barnes said.

The shooting took place at the Inland Regional Center, a state-run facility for individuals with developmental disabilities where county health officials were having an employee holiday party.

Two armed suspects — later identified as Syed Farook, 28, and Tashfeen Malik, 27 — were killed by police four hours later in a shootout about two miles from the social services center.

Farook, a county environmental inspector, had attended the holiday party and left, returning with Malik, wearing “assault-style clothing” with ammunition attached, according to news reports.

Police and federal agents have not yet offered a motive for the couple’s shootings at the center, which provides housing and work programs and therapy and social services to more than 30,000 people with developmental disabilities. But federal law enforcement officials told The New York Times Dec. 4 that Farook’s wife, Malik, had pledged allegiance to the Islamic State in a Facebook posting.

“Today, yet another American community is reeling from the horror of gun violence,” said House Minority Leader Nancy Pelosi, D-California, said in a Dec. 2 statement.

“As the families of the victims grieve and the survivors focus on healing, the entire American family mourns,” she added.

Pelosi noted that gun violence is “a crisis of epidemic proportions in our nation” and said Congress has a moral responsibility to vote on common sense measures to prevent the daily agony of gun violence in communities across America. Enough is enough.”

Los Angeles Archbishop Jose H. Gomez said in a Dec. 3 statement that it is “hard to understand this kind of violence and the hatred that motivates it. We ask how people can do such things, what is in their hearts? In these times, we need to trust in the providence of God and rely on his mercy.”

“Our Christian faith tells us that we must overcome evil with good and respond to hatred with love. So this is our challenge in the days ahead,” he added.

The archbishop said the Los Angeles Archdiocese mourns with the families and loved ones of victims and prays for healing for the wounded.

“We ask that God give his wisdom and prudence to the public authorities and law enforcement officials who are seeking to make sense of this horrible crime. And we pray for the conversion of hearts that are hardened by hatred,” he said.

Philadelphia Archbishop Charles J. Chaput said “each innocent life lost” in the shooting was precious. “Each was intimately connected through family and friendship to many others, who now survive them and bear a burden of unearned suffering.”

The archbishop, in a Dec. 3 statement, added: “Pursuing justice in this matter is in the hands of law enforcement. Our task as Christians is to pray for those persons whose lives were ended by the inexcusable cruelty of others.”

At least one of the victims of the shooting was Catholic. Damian Meins, 58, was described by a friend to The Associated Press as someone who “never strayed far from his church or its teachings.”

Meins, who worked in the public health department in San Bernardino and was the father of two girls, attended Notre Dame High School in Riverside where he met his wife, Trenna, who is principal of Sacred Heart School in Rancho Cucamonga.

“His death has affected our community deeply. He will be missed,” Notre Dame’s principal said in a message on the school’s website.

On the Facebook page of Sacred Heart School, the pastor, Father Benedict Nwachukwu-Udaku, said the parish and school community would be having a special prayer vigil Dec. 5 to pray for all of the shooting victims.

“May all who have been touched by this mayhem know God’s presence and God’s consolation,” he added
A living rosary for the Meins family was held Dec. 3.

The California Conference of Directors of Environmental Health also has requested that all environmental health managers and staff in the state observe a moment of silence for Meins Dec. 9 at 11 a.m.

Contributing to this story was Carol Zimmermann in Washington.