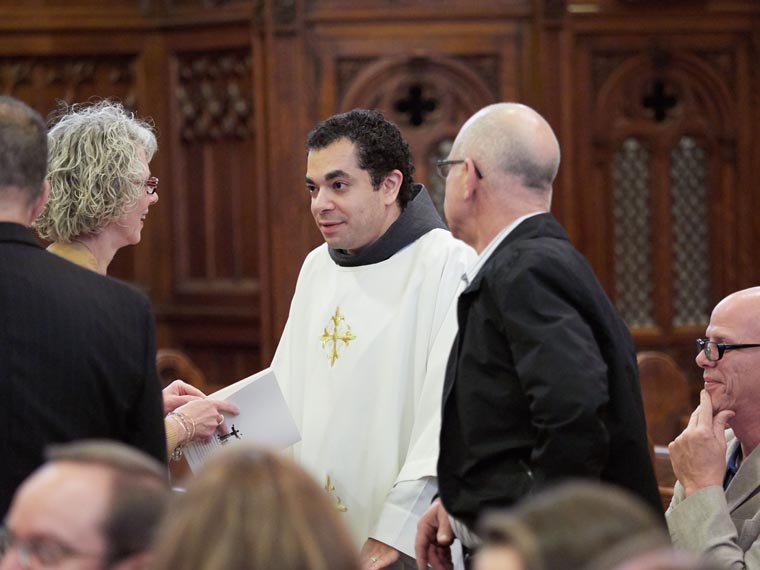 He had thought of teaching; now he’s preaching

In his sophomore year at The Catholic University of America, Nader Nabil Ata found himself constantly returning to the friars’ website as if it were a favorite movie with a cast of global heroes.

He told a friend he was thinking about joining the friars. He remembers her saying: “‘Why don’t you just pick up the phone and call them?’ And then a light bulb went off in my head.” He figured if six strangers could read his application and think he may have a vocation, then he was willing to try it out. He is still friends with that person; her name is Tara Kane.

“And every moment when I’ve had to make a big decision,” he said, “the repeating answer was yes, to continue to live this life.”

A big milestone arrived May 27, when Father Nader, OFM Conv., was ordained a priest at Franciscan Church of the Assumption in Syracuse. Over his past 12 years of formation, he said, “I would say that I took the scenic route. And God was always at work whether I knew it or not.

“And God called me not to be perfect, but to be faithful. And I have to renew that faith every day.”

Father Nader was born in Brooklyn and raised in East Windsor, N.J. He is the son of Dr. Hadia Ata, a pathologist, and the late Nabil Ata, who was the deputy director of finance for the New York City Housing Authority.

Although the family is originally from Egypt, the children were all born in this country. Father Nader was baptized in the Coptic Orthodox Church, receiving all of the Sacraments of Initiation as an infant. He attended  Catholic schools from kindergarten to college. While a student at Notre Dame High School in Lawrenceville, N.J., he did a lot of community service.

After his sophomore year at Catholic University, he entered the friars. In 2006, he earned his bachelor of arts degree in religious studies with minors in philosophy and Spanish from La Salle University in Philadelphia.

Father Nader professed his first vows in July 2007. His post-novitiate assignment was in San Antonio, Texas (2007-2014), where he earned his master of divinity degree from the Oblate School of Theology.

For his apostolic year, he served at St. Francis College in Costa Rica (2010-2011). Following that experience, he professed his solemn vows in September 2011 and graduated with his master’s degree in May 2014.

Father Nader’s first post-formation assignment was in Baltimore, where he was ordained a deacon in June 2014.

He lives at Assumption Church, where he preaches at the Wednesday, Thursday, and Friday daily Masses. Also, he is in charge of funerals, so he meets with families and walks with them as they prepare the funeral liturgies for their loved ones. He also is in charge of the ministry to the sick and homebound parishioners of Assumption.

Since Father Nader is a full member of the Franciscan Friars Conventual, which is a Latin-rite community, and he is associated with the Coptic Catholic rite, at his ordination he was given faculties — the ability to preside at Latin and Coptic rites of the Catholic Church.

His new life will be far different than the one he imagined when he went to college. Then, his dream was to be a grade-school teacher, to be married, to have 12 kids, to live on a lake in Vermont, and to have a dog.

But he found a classroom setting too structured for him. He preferred his work at a summer camp, where instead of teaching kids formally, he taught them informally. In both cases, he enjoyed the ability to give the kids back to their parents at the end of the day.

He also — momentarily — felt another calling.

While at Catholic University, he mentioned to Friar Santo Cricchio, OFM Conv., that he wanted to leave and become a Trappist monk.

“He started to laugh,” Father Nader recalled. “And he said, ‘You talk too much; you will never survive. I think you need to take more time to discern.’” At the May 27 ordination, Friar Santo vested Father Nader in his stole and chasuble.

Now that he is ordained, Father Nader will do even more preaching at Assumption. “In preaching,” he said, “one of the tasks that I have to do is to relate Scripture to people’s lives today. And that includes hope and love and mercy and baggage and the struggles of life. And, for me, I consider that to be a great honor. I would say that preaching is a privilege. It is more than just part of my job, but it is a gift that I think God gives to the clergy.”

He never knows how a homily affects people; it could be months until he learns how, and that’s only if they decide to share it with him. He believes that there’s always someone in the congregation who will hear what he or she needs to hear for that day.

Father Nader has run three marathons and he is preparing for his fourth. He also enjoys music, cooking, and doing puzzles, and he loves being around his family and his nieces. “I also love giving my nieces back to my sister at the end of the day,” he said.

He’s into healthy foods, and he does love his ice cream; one of his ordination receptions included Cold Stone Creamery creations.

Father Nader remains grateful that he reached out to the friars in college:

“I often tell other people who are thinking about vocations to religious life or the priesthood, if you don’t pick up the phone and call them or email them, you will never be able to discern if God is or is not calling you to that way of life.”