Seminarian to be ordained to the transitional diaconate 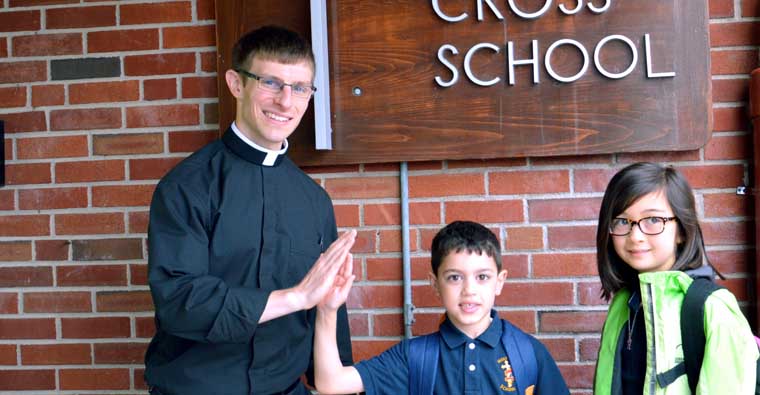 Matthew Lyons, a seminarian of the Diocese of Syracuse, will be ordained a transitional deacon May 28, the penultimate step before his anticipated ordination to the priesthood next year. The Sun sat down with Lyons to get to know him a little better.

Lyons, 28, is the son of Thomas and Nancy Lyons and the eldest sibling to his brother and sister. He grew up attending Sunday Mass at St. Joseph’s Church in his hometown of Endicott.

“I think that’s where I first kind of heard the call to the priesthood — when I was a little kid going to Mass each Sunday,” Lyons recalled. “It kind of stuck with me after that, despite my trying to ignore it at various times in life.”

Lyons said he tried to ignore the call because he had his “own ideas of what’s going to bring me happiness and fulfillment in life.” It wasn’t until late in his college career that he decided he didn’t want to ignore God’s voice anymore and came to “the realization that only in what God is calling me to will I find that fulfillment,” he said. He described it as “a slow conversion… in my own heart over the course of college.”

A graduate of SUNY Binghamton with a degree in finance (“I’d like to think that St. Matthew was a part of that,” he joked), Lyons is now completing seminary studies at Theological College in Washington, DC. His formation has also included summer service in diocesan parishes, Clinical Pastoral Education at SUNY Upstate Medical University, and a pastoral year spent at Holy Cross Church in DeWitt. Lyons said there is no particular experience that has made the biggest impact during his formation; rather, “it’s more like I get to where I am now, and I look back and I can see the immense amount of change that’s happened over time. It’s more of a slow, organic growth that happens.”

After his ordination as a transitional deacon, Lyons will be able to preach, baptize, and witness marriages. On the cusp of his ordination, he said, “It’s kind of hard to imagine it’s here already. It seems like it [time] flew by. I’m really looking forward to it at this point.”

Matthew Lyons will be ordained to the transitional diaconate at a Mass celebrated by Bishop Robert J. Cunningham May 28 at St. Joseph’s Church in Endicott, beginning at 10 a.m.

Watch an interview with Lyons on Syracuse Catholic Television’s YouTube channel (youtube.com/syrdio) and read Lyons’ reflections on his upcoming ordination on the diocese’s vocations website, vocations-syracuse.org.