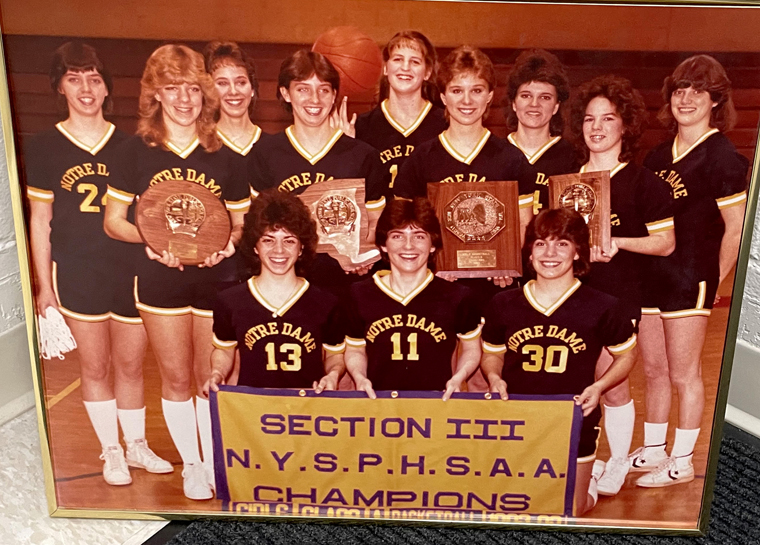 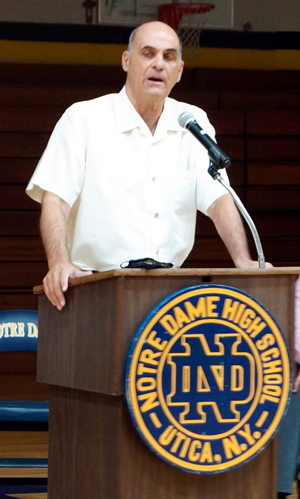 Shelly’s college coach from Villanova, Harry Perretta, and his former assistant Dan Cassidy were there.

Her classmate and Notre Dame staffer and former Athletic Director John DePerno was there.

Her Notre Dame championship teammate Margaret Grimmer Sehring was there.

Seminarian Ben Schwartz, representing the vocations, was there.

Principal Roy Kane and Campus Minister Bob McQueen were there as emcee and prayer leader respectively.

The entire Notre Dame student body was there.

As Shelly Pennefather, she was a nightmare to her teams’ victims in Colorado and New York state girls basketball. At Notre Dame, those team victories were aided in no small measure by Pennefather’s unselfish play as noted by both classmate DePerno and teammate Grimmer Sehring who added, “She lifted all of us up.”

Shelly spent one year at Notre Dame. In the 1982-83 season, the Lady Jugglers, led by Shelly, went 26-0, including the New York State and Federation championships. She scored 496 points her senior year and tied the record for field goals (19) in a single game. She was a first-team Parade All-American.

She remains the top-scoring player, man or woman, in Villanova University history with 2,408 points (and that without the 3 point scoring option).

As Sister Rose Marie, she is cloistered in the order of the Poor Clares at their monastery in Alexandria, Va.

How and why did she wind up a cloistered nun?

After her college career at Villanova under Coach Perretta, Pennefather was snapped up by Japanese women’s pro basketball in a contract that made her the highest paid woman basketball player in the world. Sadly the abysmal team that hired her, the Nippon Express, gave Shelly her first look at a sports league “cellar.”

She took action. In a desperate prayer to the Almighty, the nun-to-be promised that if her team were to win the last game, she would donate her $200,000 bonus to Mother Teresa’s convent in Norristown, Pa., and that she would personally serve a summer there.

Game day arrived. In the final seconds, with the score tied, Pennefather herself won the

game for the Express with a long “buzzer beater” basket.

Mother Teresa’s duly got the $200,000, and Shelly and Coach Perretta to boot, as he worked side by side with his former “charge” and lifetime-friend-to-be weekends in the soup kitchen.

Shortly thereafter, Pennefather told her family and friends that she was entering the cloistered order of Poor Clares at their Alexandria, Va., convent.

Searching for the “Why,” several including teammate Sehring consulted with the brothers at Notre Dame.

Others heeded the observations made by Coach Perretta on the award-winning ESPN special “A Long Embrace” viewed on TV and YouTube; it was played for the assembled in Michael J. Walsh Gymnasium.

In his speech, Perretta described the duties of the nuns in the cloister as being inconstant prayer. They know what is going on in the world, about the wars and urgent needs of specific peoples. They get a briefing every day from their Mother Superior. Perretta also said the nuns get special prayer requests from the public. He told of a special rosary they said for him every day while he was sick three years ago. He apportions credit for his healing between the medicine and the prayers of the nuns.

“Shelly Pennefather Day” ended with Principal Kane telling the assembled students that the school doesn’t expect them to all go out and wind up in the World Series or pro sports. Kane asked each student to think about how succeeding classes will regard their contribution to the Notre Dame legacy.