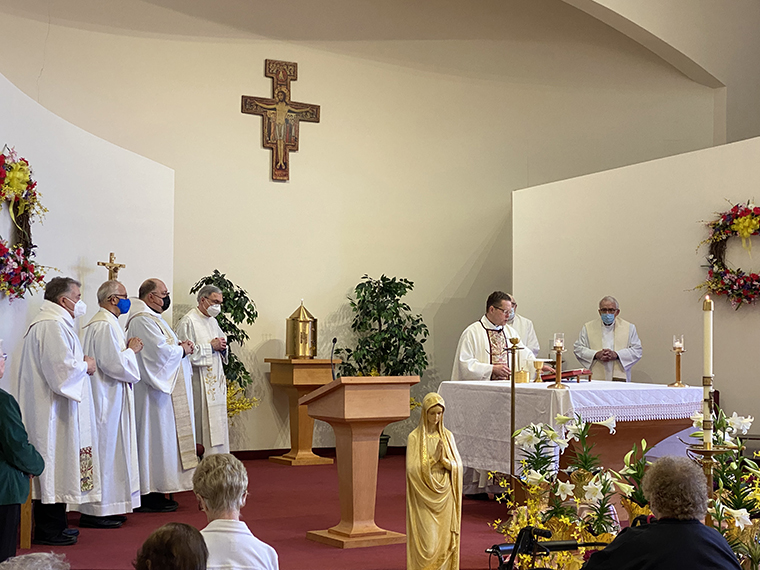 More than a few people shared that sentiment following the news that Sister Mary Celestine McCann had passed away at the age of 94 on April 12 at the Franciscan Villa in North Syracuse. It was there where members of her religious order, family, former students and close friends gathered to say goodbye at a private funeral Mass.

Father Cliff Auth is pastor of St. Mary of the Assumption Church in Baldwinsville where “Cele,” as he lovingly referred to her, recently spent five years in Community Service at the parish’s Chapel House. As principal celebrant and homilist at the funeral Mass, he spoke about the COVID pandemic and its effects on so many. Fr. Auth pointed out that some of those who suffered were blessed to have “walked with someone, they found someone that was a witness in their own life that was a testimony that Jesus Christ is risen. For me, that person was ‘Cele.’”

Father Auth described Sister as “a force to be reckoned with … a foundation of Martha and Mary, Francis and Clare, Marianne Cope and St. Paul the Apostle.” He added that “she was always kind … someone who was unabashedly honest, but also very gentle with the faults and failings of other people.”

She was born Isabell Teresa to Thomas and Rita Trainor McCann in Camden, N.J., entering religious life in September 1946. The following March she received the Franciscan Habit. She graduated from the College of St. Rose in Albany and went on to receive a master’s degree in English from St. Bonaventure in Olean. She taught in New Jersey for eight years before moving to a teaching position in Utica. In all, she spent more than 50 years teaching in schools in New York and New Jersey.

Many Central New Yorkers will remember Sister Celestine from the 15 years she spent as a Hospitality Minister at Stella Maris Retreat Center in Skaneateles, prior to coming to Baldwinsville. Her final time was spent in ministry at the Franciscan Villa.

Before the prayers of commendation were offered at the funeral, a number of people shared  stories of their personal experiences with Sr. Celestine. One person remembered ‘Cele’ telling her that “I was a child of the Depression, but I have never been depressed,” celebrating her great love of life. Another guest recalled how she always placed the needs of others first, even making a gift of the dessert that the Sisters in her house were going to share at dinner. When one of her housemates asked if anyone knew what had happened to the pie, Sister Celestine confessed, “Oh, Sister, I hope you’ll forgive me, but you know that couple that lives down the street? They rarely have a nice pie like that, so I gave it away.”

One of Sister’s former students, a pallbearer at the funeral, spoke of her great love and kindness toward all, adding that “to all the Sisters in this room, you left a mark on all of us as Sister Celestine did.”

Sister Celestine was predeceased by her parents, brother Bernard McCann and four sisters: Joan (Al) Adams, Suzanne McCann, Dolores (Thomas) Troncone and Rita (Robert) Smith. She is survived by the Sisters of St. Francis of the Neumann Communities, brother-in-law Al Adams and several nieces and nephews.

Burial took place in Assumption Cemetery. A Memorial Mass will be held at 11 a.m. on Saturday, May 7, 2022, at St. Mary of the Assumption Church, 47 Syracuse St., Baldwinsville, with a reception to follow.

In lieu of flowers, donations may be made to the Sisters of St. Francis of the Neumann Communities, Congregational Development Office, 225 Greenfield Pkwy., Suite 208, Liverpool, N.Y. 13088.