Skaneateles native would love to welcome you at famed oratory 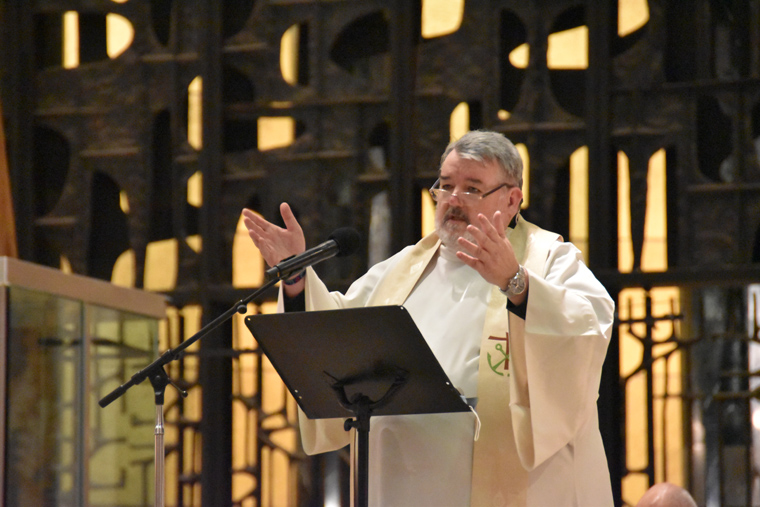 Father Michael M. DeLaney, C.S.C., has gone from the hilly terrain of Skaneateles to the highest point in Montreal.

“And I’ve taken the long route away through living in five different countries, traveling through 45 other countries, you know what I mean?” he said. “I didn’t take the direct route up Route 81 and across the Thousand Islands Bridge; I took the long way around. I went through Tierra del Fuego.”

He has a picture from about 80 years ago: his grandparents standing in front of the statue of St. Joseph attached to an outer wall at St. Joseph’s Oratory of Mount Royal in Montreal. That spot is right below the office that he occupies as the new rector of the oratory — the largest church and shrine in Canada and the largest shrine to St. Joseph in the world.

“Isn’t that something?” Father DeLaney said of his grandparents’ connection to the shrine.

Father DeLaney grew up right up the street from St. Mary’s of the Lake Church in Skaneateles, where the young people had to pay attention because the priest would call on them during a homily. “Our road kind of turns into a country road, and then behind us were just open fields and hills,” he said. “You could see pretty much the hills that took you all the way to Auburn from our backyard. And across the space was open — Austin Park and the woods and we’d have our forts in the woods.”

He still has the photos he took of the German-crafted stained-glass windows at St. Mary’s on a home visit a few years ago. “In the Crypt Church of the oratory,” he said, “we have many of the same ones.”

Vocations in the family

His family also influenced him — one cousin, a Maryknoller; another, a Sister of St. Francis. And his uncle is retired Diocese of Syracuse Father Thomas J. McGrath of Skaneateles.

“We’ve had a lot of vocations from the village,” Father McGrath said, mostly order priests.

“I always was intrigued with the people that would come and talk at the church for mission appeal,” Father DeLaney recalled of his days in St. Mary’s Parish. “But putting that in with my own interests, I was always very interested in National Geographic magazine and Maryknoll magazine, seeing these images and learning more and more about the world.”

Skaneateles, he said, is “a great place for a vacation and it’s a great place to grow up.” But he learned early there were other worthwhile places to see as well. At 16 he was an exchange student in Brazil, and he is still in contact with people he knew there.

His bio from the oratory says he was admitted to the Congregation of Holy Cross in 1981 and ordained in 1987, after studying international relations at Georgetown University and the University of Notre Dame.

“I want to invite the different folks in the different dioceses,” Father DeLaney said, “to consider a pilgrimage here; makes a difference, me being from there, the pride I would have in being able to host groups that would come and to welcome them here, and show them the best, also, of our Congregation of Holy Cross.”

He speaks Spanish, Portuguese, French, Italian, and German. At his Installation Mass (on YouTube) at the oratory, he gives his talk in French and  English. In his talk he says he will do his best to ensure that the oratory “will always be a place of welcome to each person who is drawn here as a place of prayer and healing, and for its beauty, both architecturally and the natural beauty.” He concludes the address by saying thank you in Spanish, French, and English.

A tourist draw, Skaneateles Lake supplies most of the water for Syracuse, but Father DeLaney has seen places in the world where people struggle even to find clean water; where there is poverty, congestion, noise; where people are challenged to earn a decent living and to get an education.

Father DeLaney had great-uncles who came to see Brother André, the oratory founder who became a saint, for healing in Montreal, and they came to his funeral in 1937. And when his grandmother died at the age of 100 and the family was cleaning out things from her house, Father DeLaney found the prayer cards that his great-uncles had brought back from the funeral of Brother André.

For 40 years, Brother André was the doorman at the school that the Holy Cross Brothers ran, directly in front of the oratory. “People were coming to Brother André for healing and for his prayers and his blessing, because they trusted him,” Father DeLaney said. “And he was very personally dedicated to St. Joseph; he’d been orphaned young and I think St. Joseph as the father of Jesus had a very important role for him.

“And he had this dream to build something for St. Joseph across the street on the land that Holy Cross ran. And he started a little chapel. And that’s where he received people. And then in his lifetime his dream started as they built the Crypt Church. … And so that’s where he received people and blessed them and then he would receive them in the small chapel, which we still have intact — it’s up on the hill behind us — and people visit that regularly.

“And that’s what grew into the great Oratory of St. Joseph. It was his personal dedication to St. Joseph and the fact that people saw something so special in him that they continued to return for blessing and for healing. And he was a very simple, uneducated man in many ways. But they trusted him.”

At the original chapel on the property, Father DeLaney said, people have left “many crutches and items of thanks because of the healing that they experienced in meeting with Brother André and receiving his blessing.”

Asked if there is a tally of those healed, Father DeLaney said:

“I don’t know that there’s a tally. … Sometimes there’s been physical healing, yes. But I think the healing is a very spiritual healing … when people go through these transformations of finding the strength perhaps to live with their situation better and to trust God a bit more and to be able to feel healed in that sense. So I do believe that there’s some physical healing, yes.”

‘Take in all the good’

He also sees the oratory as a place where pilgrims can “relax in a space, take in all the good. Come to the organ concert, go pray in this chapel, do whatever you might want to do. Visit the tomb of Brother André, go take a walk on the … Stations of the Cross [trail] up through the woods that we have here. Walk the paths. All that. People find their own way for healing in nature, in prayer, in music, whatever it might be. … They can find all that here.”

Even in the heart of winter amid the snow, at 4 in the afternoon people will come to the oratory to look at the sunset, he said; and with summer coming, a few hundred people view the sunset each day. “When you have natural beauty,” Father DeLaney said, “there’s something different, and that feeds the soul.”

The beauty of the oratory, he said, includes the architecture, art, prayer, liturgies, walking trail, woods, and outdoor Stations of the Cross. There is also a museum, and before the pandemic hit, music concerts were offered outside in the summer.

Pilgrims can attend Masses and talks, and confessions are offered in English, French, Italian, Portuguese, and Spanish. “I read documents in many different languages; in the course of the week I’m probably reading in three or four languages,” Father DeLaney said.

Pilgrims can also go to the shrine to St. Kateri Tekakwitha that is 30 minutes away and also to the Sainte-Anne-de-Beaupré Shrine in Quebec City.

The Canadian border with the United States has been closed for 15 months, Father DeLaney said, but a Montreal curfew was set to expire last weekend after six months. When the border opens again, pilgrims can contact the oratory (https://www.saint-joseph.org/en/; 1-877-672-8647; info@osj.qc.ca) to plan a group trip.

Pilgrims can stay in the oratory’s  guest house with private rooms, shared rooms, and meals. “It’s affordable, I think,” Father DeLaney said, “and then we would plan their trip, and I would presume they’d come up on a bus. … And then the bus would be able to take them to other sites as well.”

He has not been told when the border will reopen but when it does, Father DeLaney said, “we’ll be ready.”