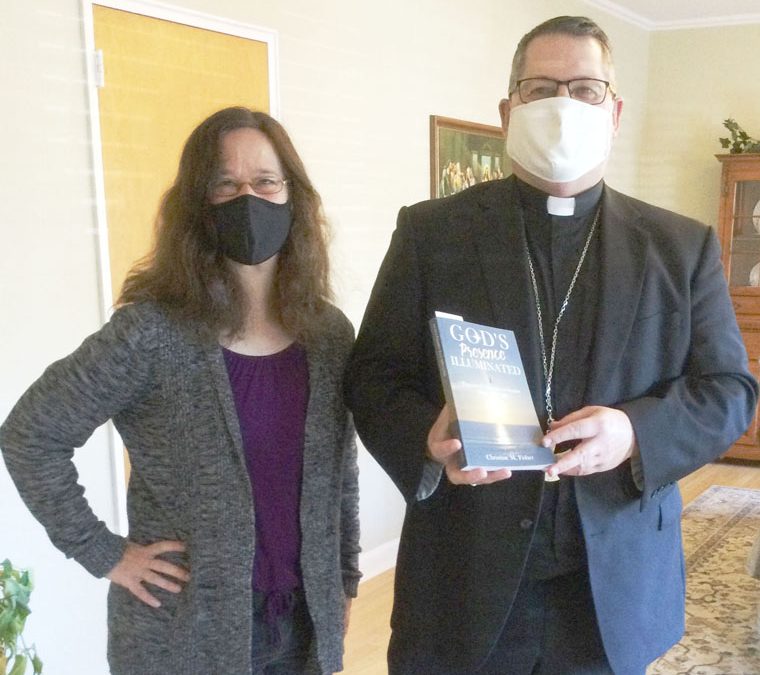 Christine Fisher hadn’t planned on writing a book, although she’s been writing for most of her life.

So when Deacon Tom Harley of Endicott’s St. Ambrose and Our Lady of Good Counsel parishes suggested that Fisher compile some of her writing into a book, she was both surprised and befuddled. She had no idea how to proceed.

That Fisher would soon meet a Christian author/speaker from Texas who would mentor her — and eventually publish her book — was, she said, a sign of God touching her life.

“I see God’s handprint on it every step of the way,” she told the audience at her Nov. 14 book launch, hosted by Father Michael Galuppi, pastor of St. Ambrose and OLGC.

“God’s Presence Illuminated” was published by Mary Ethel Eckard Publishing through Amazon earlier this fall. Readers will find that Fisher often sees God’s hand at work in her life, just as she often feels His presence in the “ordinary,” especially in nature. She hopes her book helps others “see differently” and discover God in the everyday.

Fisher grew up in Johnson City and describes herself as “a simple, quiet, ordinary person.” Writing became an outlet for her early on. She found writing easier than talking when she wanted to express herself and better process her faith.

Her awareness of God’s presence developed early as well. She recalls feeling that presence as she stood by the water’s edge at Wildwood, New Jersey, when she was just 10 years old. The ocean, she writes, is a powerful reminder of the magnificence of God.

So it’s no accident that the cover of “God’s Presence Illuminated” features a photograph Fisher took of the sun setting over the ocean. The vastness of the ocean, she writes, is like God’s love for His people: “No matter what, His love for us never ends.”

Over the years, Fisher compiled little booklets of her writing for family and friends, but she put writing aside for 14 years while she was busy raising her children. Then, in 2013, while attending a Women of Faith conference in Rochester, she heard the Christian band Third Day perform. It eventually led her to start writing again.

“Their music ministered to my soul,” she said.

Fisher attended several Third Day concerts — one at Virginia Beach, where she took that photo of the sunset — and followed them on social media. That led to her discovery of several Christian blogs. In time, she decided to create one of her own: hopetoinspireyou.com. She’s been posting her thoughts to the site once a week for the past six years.

Fisher shared her website with Deacon Tom after meeting him at the annual Good Friday Witness Walk in Endicott in 2018. The mile-long walk through the streets of the village was, she said, the first time she had publicly displayed her faith. Three times during the walk she helped carry a 40-pound wooden cross, once bearing it on her shoulders. It was, she said, a vivid reminder of Christ’s suffering.

After reading some of Fisher’s writing, Deacon Tom asked her, “What do you see with your ministry?” Fisher said it was the first time she had ever viewed her writing that way.

“God was planting a seed,” she said, encouraging her to do more with her ministry.

Fisher’s book, subtitled “Treasured Thoughts to Inspire Hope and Light,” contains 90 readings divided into four sections: finding God’s presence illuminated in creation, in Scripture, in people, and in Jesus. She suggests reading one passage from each section at a sitting. But, she said, you can also choose readings at random.

Either way, you’ll find Scripture passages that complement each reading.

Some of the readings recall events in her life, or events in the lives of family and friends. In “Just Be Held,” Fisher recalls comforting an infant in the NICU where she volunteers. In the two hours she held him, the baby did not cry.

“It made me think of how often we need to just be held by the Lord,” she writes, “knowing we are safe in His arms.”

That passage ends with words from the Book of Deuteronomy: “The eternal God is your refuge, and His everlasting arms are under you.”

Another passage was inspired by a friend who had noticed bits of broken seashells in the sand as she walked beside the ocean one day. Though broken, the shells were still beautiful — just as people can be both broken and beautiful.

“Throughout life,” Fisher writes, “we get tossed around, sometimes even crashing into big boulders, the big issues that might try to break us.”

But God is with us in our brokenness, she writes, adding, “Our brokenness may lead us to Christ.”

Fisher echoed that thought during the talk she gave at her book launch: “God wants to use us as we are to further the kingdom.”