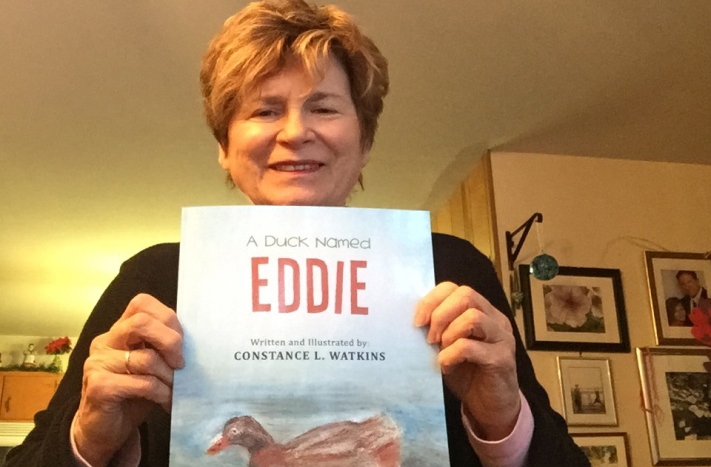 UTICA — Constance Watkins’ newest children’s book, A Duck Named Eddie, was inspired by a story a friend told her more than 20 years ago. “I never forgot it and wanted to do something with it someday,” said Watkins, a parishioner at St. Mary of Mount Camel/Blessed Sacrament in Utica.

The book is 22 pages long and is illustrated with Watkins’ colorful artwork. It is suited for children of pre-school age up to fifth grade.

The book tells the story of two young girls who won a duck as a prize while playing a ring toss game at the Illinois State Fair and their adventures of caring for the animal.

According to Watkins, the book has been a great success. “One of the reactions of people who have read it is that they loved it,” she remarked. “They especially liked the fact that it is based on a true story.”

Watkins said that her adult friends also enjoy her books.

Watkins’ other books are: The Icebox Snowball, Joey Days, That Was The Kitten That Was, Happy Was His Name, and Mushu. She said the books are true accounts of her experiences with her grandchildren.

Watkins serves as lector and is a member of the social committee at St. Mary of Mount Carmel/Blessed Sacrament.

After retiring as a secretary from the Unified Court System of New York State nine years ago, Watkins was able to pursue her dream of writing. She finds time to serve in local art associations and holds positions ranging from secretary to contest judge. Her pastels, acrylics and photographs have won numerous awards at shows throughout the Mohawk Valley. Her painting, “The Nestled Barn,” was featured in the national magazine American Style in June 2008.

Watkins said that there is a theme of joy and happiness that runs through all her books. “They were all inspired by God first, and then my grandchildren,” she said. “I thank God for all my abilities.”

Watkins’ books are available online through authorhouse.com, amazon.com and grammybooks.com. In addition, they may be ordered through bookstores or from Watkins.