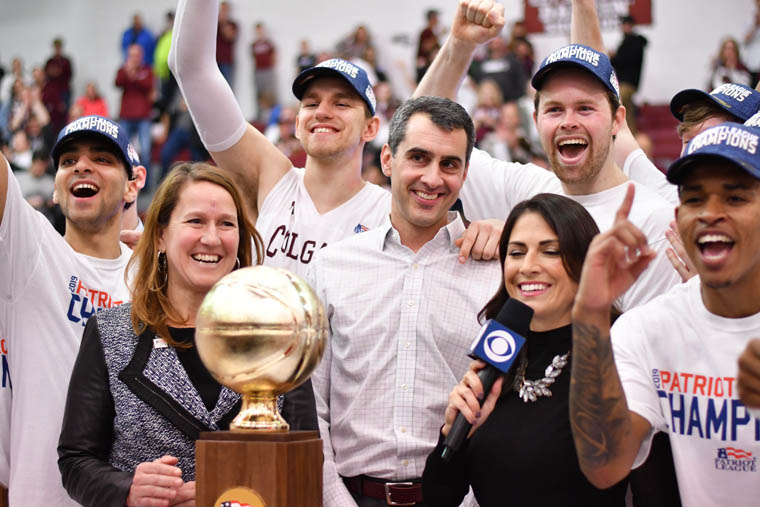 St. Mary’s Church in Hamilton already had a reason to dance: In its 150th year as a community, it met its goal of $400,000 in a capital campaign. It started in February and took only eight weekends.

Then, the university in town, Colgate, advanced to the Big Dance: the NCAA Tournament.

Yes, the Raiders brought down the house, and then the church. Hamilton loves hoops, and that includes St. Mary’s administrator, Father Jason Hage. 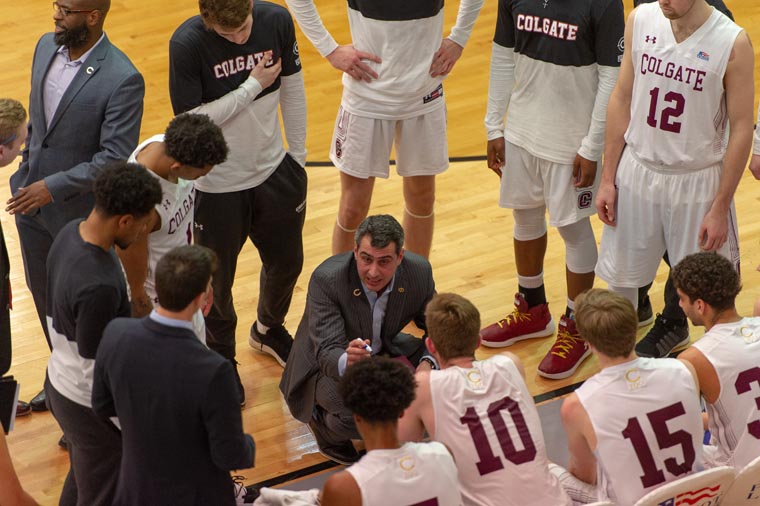 Colgate University men’s basketball Coach Matt Langel instructs his team this season. The NCAA Tournament, he says, is “one of the great things I’ve been a part of in my lifetime.” Coach Langel sets a “tremendous example” by being kind to people, says Father Jason Hage. (Photo courtesy Colgate Athletics)

St. Mary’s was crowded as usual for the 11 a.m. Mass on March 17, with overflow in the choir loft. Father Hage looked up there and saw Raiders men’s basketball Head Coach Matt Langel with his family. Father Hage, who considers the coach to be a “good humble guy,” said to himself: I think I will acknowledge him after Mass.

Many times, Father Hage said, Coach Langel has told him how much he appreciates him. The coach and his wife, Tara, have a daughter, Logan, 11, and two sons, Lucas, 9, and Jackson, 5. All three children are in St. Mary’s faith-formation program, Father Hage said.

So before the final blessing at the Mass, he pointed to the coach and summoned him to the edge of the loft.

“The whole church erupted in applause and it didn’t stop,” Father Hage said.

The Raiders’ 94-80 victory over Bucknell on March 13 in the championship game of the Patriot League Tournament gave them an automatic spot in the Dance.

The day after the victory over Bucknell, Father Hage called Coach Langel and said the parish family was so proud of him that he was going to ring the bells of St. Mary’s at noon. The bells are pretty loud, Father Hage said, and everybody heard them.

On March 17, when the applause in the church finally stopped, Father  Hage  told Coach Langel: “We’re so proud of you. St. Mary’s stands with you.”

He added: “I hear 13 prayers in this town goes a long way.” So he lit 13 candles in the church’s Marian shrine.

According to Colgate’s website, the university was founded as “The Baptist Education Society of the State of New York by 13 men who each offered $13 and 13 prayers.

“The society’s original constitution contained 13 articles. Our address is 13 Oak Drive, and we are located in the zip code 13346 (the first two digits are 13, and the last three digits add up to 13!). There is certainly no triskaidekaphobia (fear of the number 13) here — in fact we’ve embraced it as Colgate’s lucky number!”

But the post-game headline on the Raiders’ basketball website says: “Colgate Takes Vols to Limit in NCAA Thriller.” Tennessee, the No. 2 seed in the South Regional, defeated Colgate, the No. 15 seed, 77-70 in the first round of the Big Dance on March 22 in Columbus, Ohio.

At one point, the Raiders closed within 64-67, but it was tough playing without 6-foot-10 forward Rapolas Ivanauskas. Colgate’s website says that he “sat out the entire second half because of eye irritation that worsened as the game progressed. The Patriot League Player of the Year was Colgate’s leading scorer this year at 16.4 points per game.”

“I felt so bad for him,” Father Hage said of the sidelined star. 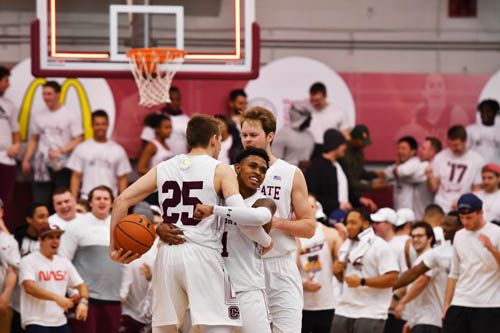 Colgate guard Jordan Burns scored 32 points against Tennessee, to follow his 35-point performance against Bucknell. Reached by phone on the bus as the Raiders headed for the airport to fly to Columbus, Coach Langel was asked about Burns’ 35-point night: “We work on shooting a lot. … That’s his hard work and I do give him a lot of credit.”

The coach also appreciates Father Hage’s energy and his “spectacular” involvement in the community; the coach sees Father Hage in the stands for his basketball games.

Asked if there was a mystical aspect to his team’s success, Coach Langel said, “We think we have control over things,” but “there is a greater power that has a plan for all of us.”

In his junior and senior seasons as a basketball player for Penn, his teammates and he won the Ivy League title and played in the Big Dance. Also, two of his assistant coaches at Colgate appeared in the NCAA Tournament as players, and he was an assistant coach on six other teams that went to the Dance. It’s a dream come true for a player in the Dance, he said, to know he is representing the team, his family, tradition, “and where you’re from.”

“Those memories and experiences never go away,” he said.

He added: “I think you’re always drawing on your experiences. … We should always learn from experiences.”

The New Jersey native remembers growing up loving basketball and watching Selection Sunday and filling out a bracket. He listened to games on a Sony Walkman, and he hurried home from school to watch the games on TV.

In his playing days for the Penn Quakers, Coach Langel became a member of the 1,000-point club with 1,191 points in a Red and Blue uniform, according to the Raiders’ website. He made as many as eight three-pointers in a game, made 70 three-pointers in one season, and totaled 201 three-pointers for his career.

The Raiders’ website says that after graduation, Coach Langel was drafted by Atlantic City of the USBL in 2000 and worked out in the Seattle SuperSonics’ camp. He then played professionally in Switzerland and France.

He participated in the Philadelphia 76ers’ summer camp in 2001 but returned to Europe. His last professional stop before returning to Penn as an assistant coach was in Holland.

Leading up to the Tennessee game, Coach Langel said, Colgate’s coaches shared stories of excitement and energy but also told the players: “It’s just a game of basketball so let’s go out there and play it like we know how.”

After flying to Columbus the Raiders rested and had a good meal; the next day they had a 45-minute practice in the Tournament arena in front of crowds; next they practiced at a local college as the final prep for Tennessee.

With the Raiders (24-11 for the season) back in Hamilton now, Father Hage remains a big fan: “We’re so proud of them. … They gave a tremendous effort.”

He noted that Coach Langel and his family were at the 11 a.m. Mass again on Sunday, fourth pew back. At the end of Mass, Father Hage had everyone say thank you to the coach “for giving us such a show.” And again: applause and cheering.

Coach Langel conveyed his gratitude for the support from the parish, and he kindly stayed after Mass to shake hands with people as he remained a humble “man of the community, for sure,” Father Hage said.

He noted that the parish has only 186 registered households but it still met its fundraising goal. He said parishioners have commented on the life and activity of the parish.

“On fire. … Talking about good stats all the way around,” Father Hage said, referring to the church and also to the Raiders.

Coach Langel noted that Coach Rick Barnes’ Tennessee team is very disciplined and is very good assisting on baskets. Tennessee went on to defeat No. 10 seed Iowa; the Vols will now face No. 3 seed Purdue in the Sweet Sixteen on March 28.

That’s OK; Coach Langel is on a “beautiful campus” and he considers the village of Hamilton a “special place.”

“I feel blessed to be part of the team,” he said.